Valuing Your View: Homes with ..

A Thousand and One Stories: Exploring the legendar...

A Thousand and One Stories: Exploring the legendary La Mamounia hotel 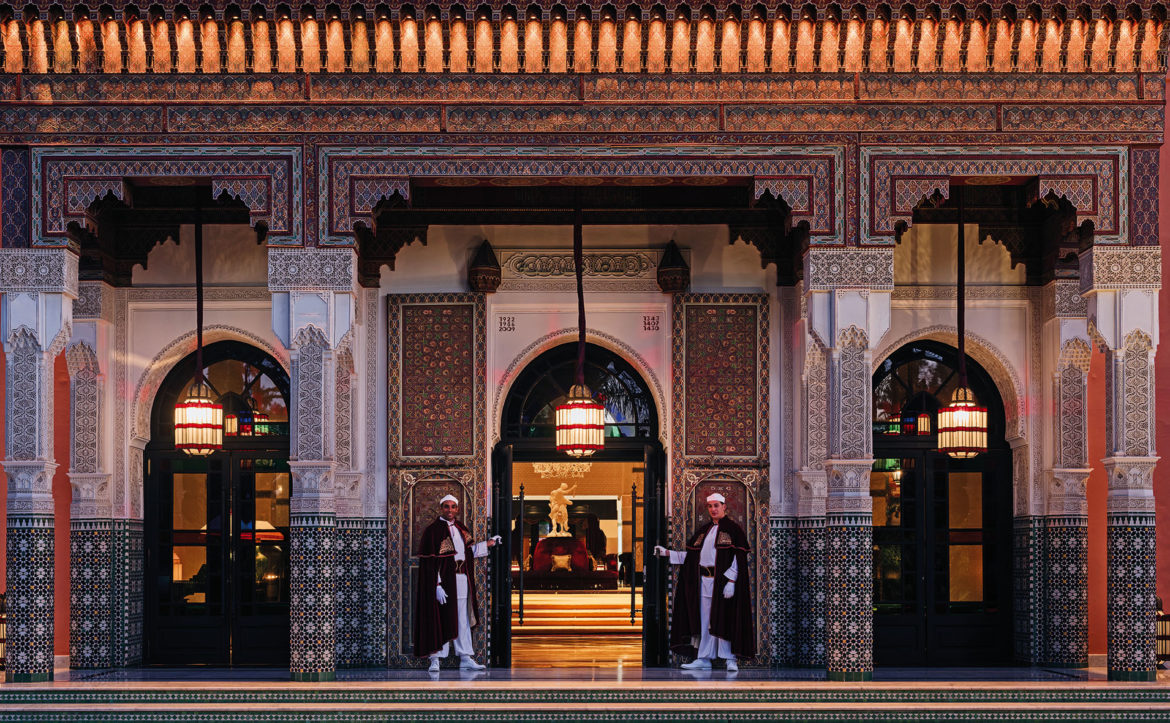 Since it opened its doors in 1923, the legendary La Mamounia hotel has embodied Morocco’s warm hospitality in the most lavish and refined manner

Reminiscing about Marrakesh and his winter home, La Mamounia, Winston Churchill declared to Franklin Roosevelt in 1943: “It is one of the most beautiful places in the world.” With exquisite walled gardens, an opulent terracotta-coloured palace and the snow-capped Atlas Mountains as a backdrop, we believe Mr Churchill was on the mark.

The story of this legendary palace began in the 12th century, when it was an oasis sheltered behind Marrakesh’s ramparts. Six centuries later, Prince Al Mamoun, who received the gardens as a wedding gift from his father, named it after himself. Years passed and, in 1923, La Mamounia opened its doors as a luxurious hotel, offering a subtle blend of Arabic-Andalusian architecture and Art Deco style. Having undergone several refurbishments over the years, it was most recently redecorated by famous French interior designer Jacques Garcia.

Just a few minutes’ walk from Marrakesh’s historical Medina, La Mamounia is an exceptional place which has attracted celebrities and heads of state for almost a century. In fact, several films were shot here; the setting is perfect. Two tall doormen in traditional dress open the large palace doors, revealing a glamorous world. As soon as you step in, you are instantly seduced by the hotel’s unique scent, one of its trademarks, a blend of Atlas cedar, sweet dates and fresh citrus. The decoration is just as intoxicating, rich in both traditional and modern Moroccan art, in the shape of hand-painted wooden ceilings, blue, green and orange zellige mosaics, coloured glass lanterns, refreshing fountains (the symbol of life in Moroccan culture), as well as modern sculptures, paintings and photography. Both natural light and interior lighting play a large part in the atmosphere, setting off the rich and colourful fabrics of the sofas, heavy curtains and carpets.

The hotel may be almost a century old but it has gracefully jumped into the 21st century. Modern comforts are present throughout the hotel: Haute couture shops with modern window displays bring you back to the present day. Even Pierre Hermé, the world-famous Parisian pastry chef, has opened shop here. On each floor, the corridors are lined with black and white photographs of Moroccan men and women in all sorts of sceneries, taking you on a journey to the heart of the country. The sumptuous rooms, ranging from classic to suites, and exceptional suites to private riads, are all decorated in a Moroccan style, with intricately patterned wall tiles, internal lattice-wood screens, gilded mirrors and colourful mosaic-tiled floors. Large bay windows lead onto private balconies with big armchairs, where you can sit with a glass of chilled rosé as you look out onto the gardens and the mountains. The marble bathrooms feel like a mini hammam, with an alcove mosaic shower, a large standalone bathtub and a Moroccan-style window. The larger rooms even have a walk-in closet.

As if the hotel’s decoration doesn’t arouse our senses sufficiently, there is a whole other sensorial universe to be discovered: the spa. This enchanting 2,500sqm space offers a traditional hammam, massage rooms, steam bath and pool, where touch, sound and smell come together to tantalise the body. The spa’s indoor pool, which was once one of the hotel’s restaurants, is the perfect location for a dream photoshoot: large mosaic-covered pillars and white arches surround the turquoise pool underneath a hand-painted wooden ceiling and skylight. At the back, a “goddess bed” awaits with its white oversized cushions. The outdoor pool is equally stunning, but in a very different style. A large minimalistic square, surrounded by tall palm trees and greenery, features an “island” from which four large palm-trees keep a watchful eye over bathers.

Beyond the deckchairs, with their fluffy blue towels, sprawl the six hectares of walled parkland filled with 700 orange trees, 5,000 rose bushes, 21 cactus species, 6 palm trees species and 200 olive trees, some of which are centuries old. Halfway down the majestic central alley stands the Menzeh ice-cream and pastry shop, where you can learn to make and pour Moroccan mint tea. A high-tech gym is tucked away in the garden along with the tennis courts, and right at the back is the hotel’s vegetable garden.

After a stroll through the gardens, it is time for an apéritif. Depending on the time of year, and your mood, you can choose from a casual drink by the pool or sip a glass of champagne to the sound of the jazz band in the Italian bar, where hostesses dressed in monochrome Moroccan robes take you to your seat, while waiters in traditional dress come to take your order. Cigar lovers will enjoy a cocktail in the plush Churchill bar and those looking for a more authentic ambiance can drink a Moroccan tea in an Andalusian patio.

Variety is the spice of life and there are plenty of flavourful spices in Morocco. So it’s no wonder that there are plenty of options to choose from when it comes to dining at La Mamounia. There are four restaurants: Le Marocain, an authentic journey to the culinary heart of the country in a traditional setting; Le Français, a sophisticated yet discrete brasserie; L’Italien, a fine-dining experience in an atmosphere in shades of dramatic crimson red and gold and, last but not least, the more casual Pavilion de la Piscine, open all day for refreshing poolside snacks or cocktails. Speaking of which, this is where breakfast is served and never has it been more indulgent and exciting. It is probably the only stress you will endure during your stay, having to choose from the ample buffet. Once that ordeal is over you can relax and contemplate your surroundings.

Yes, Churchill was right, this is one of the most beautiful places in the world.

There are two sides to Marrakesh, the traditional Moroccan charm of the old city, where the frenzy of the medina dazzles your senses, and the modern Marrakesh, a trendy city where fabulous contemporary museums, shops and restaurants attract the fashionable crowds.

La Maison de la Photographie: a black-and-white photography museum in the centre of the Medina.

Le Jardin Secret: a peaceful and lush garden, ideal for a break during your souq shopping expedition.

Musée Yves Saint Laurent: a must-see for fashion lovers, an ode to the world-famous French fashion designer, who made Marrakesh his second home.

The Medina: There is a whole world in there! Prepare yourself to negotiate prices with taxi drivers, vendors and turn away eager “freelance” guides. This is the old school Marrakesh, where you won’t resist stocking up on Argan oil, spices, carpets, candle holders, babouches and baskets.

For a modern take on Moroccan pottery, pop into Chabi Chic. There are several of these shops around town, selling authentic Moroccan kitchenware and accessories.

In the new part of town, on the same street as the Musée Yves Saint Laurent, wonder around 33 Rue Majorelle for some fashionable accessories, shoes and even some kitchenware, and because you cannot leave Marrakesh without its iconic scents, stop by L’Atelier by Héritage Berbère and pick up one of its distinctive scents in a beautifully designed bottle.

Nomad: a trendy rooftop restaurant in the heart of the Medina serving Moroccan dishes with a contemporary twist.