Tom Leamon: On the Spectrum

Tom Leamon: On the Spectrum

Tom Leamon was born in London and obtained his BA in Fine Art from Loughborough University in 2003. After graduating, he set up the art collective Us So Far, an underground group who staged pop-up shows in derelict buildings throughout the UK. Tom adopted the role of both artist and curator and set about to successfully disrupt the art world gallery system. 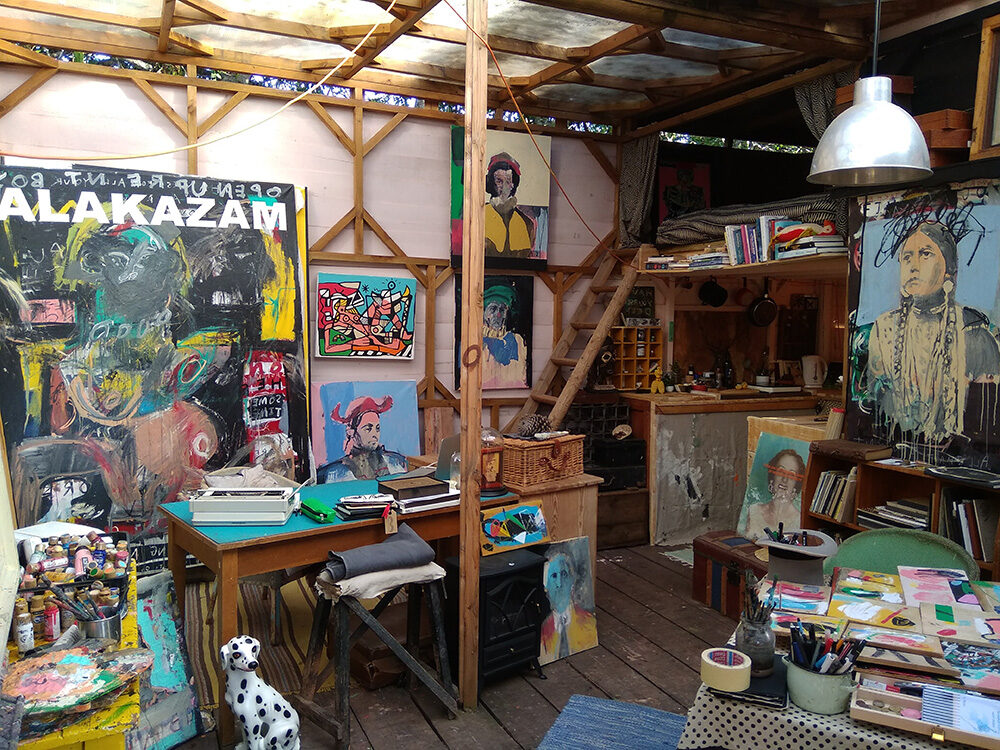 A bursary in 2004 from Red Cow Studio enabled him to produce a serious body of work and he was invited to participate in numerous group shows and had a series of solo exhibitions working with a highly respected young gallery, who has helped to build his global reputation on the international art fair circuit, with his work recently shown at Frieze New York.

Tom relocated to the Algarve about six years ago, and in 2014 he co-founded the Beekeepers, an Arts Cultural Association located on the Spanish border, and is currently in the process of creating artist studio spaces called Espaço Yucca, outside of Tavira. Essential Algarve met with the artist there as he prepares his forthcoming solo exhibition at Fresco Gallery in Almancil, entitled On the Spectrum.

At times, Tom Leamon’s work is raw and unfettered as he explores portraiture with a vibrant palette and expressive mark-making. At others, he creates amorphous coloured patterned abstractions reminiscent of certain Picasso or Miró pieces. His portraits appear to be reclaimed images from magazines or historical figures represented as a bust. This is very much in keeping with Tom’s DIY aesthetic — for him the found object has an inherent worth, whereby abandoned doors and discarded frames are collected and incorporated into the work. 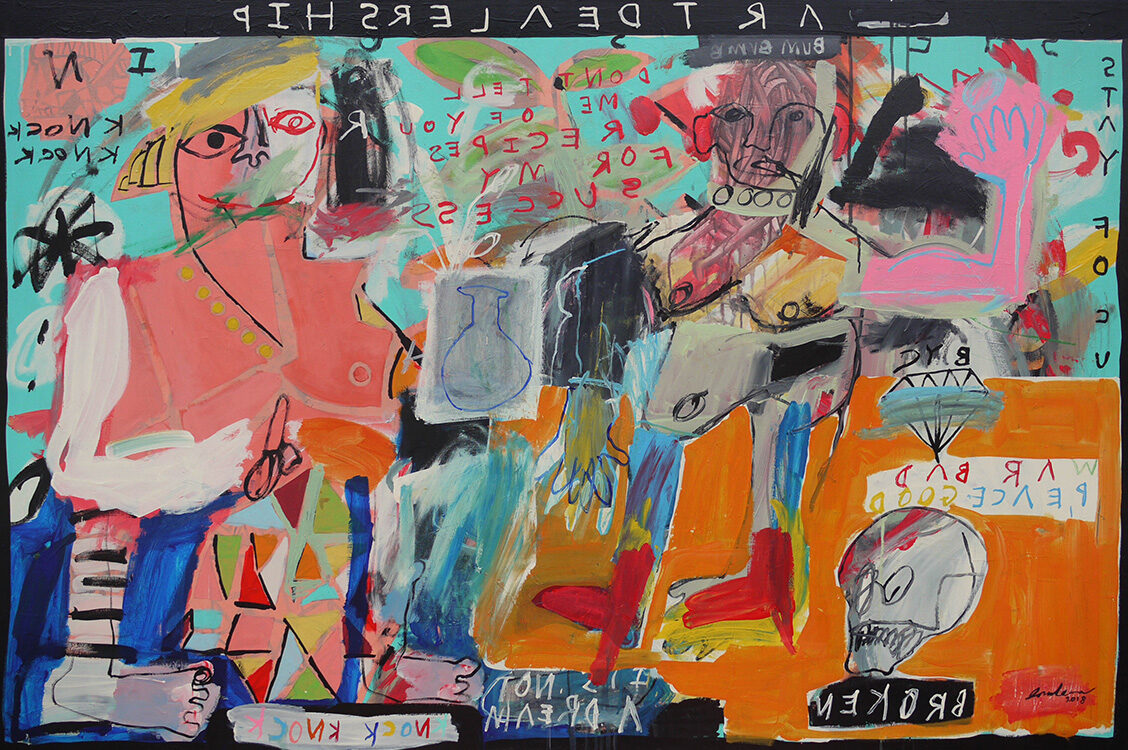 “In the Algarve, people throw out so many beautiful things and I trawl the beach and find something new and interesting,” he states. “I find value in that stuff; I love to be able to reinvent things.” This lends the work physicality, as with the late great colourist Howard Hodgkin, whose brushstrokes included the frame. Basquiat often painted directly onto found wood and street objects. More recently Vhils, the famed Portuguese urban artist, has a whole series of work in which he carves back into painted and distressed wood doors and panels.

Leamon works up his surface with broad gestures, bold colours and written text, sometimes scrawled backwards. There is a nod to abstract expressionist artist De Kooning, seen in the distortions and, of course, to Basquiat with the symbols and lettering. We have a sense of deep psychological enquiry as his figures can be viewed as comic, combined with existential angst. They are stuck in time and space. They are limited to their historical or fictional roles, depicted as static busts trapped within the picture plane. The contemporary portraits likewise capture this ridiculous absurdity. 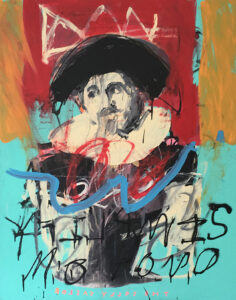 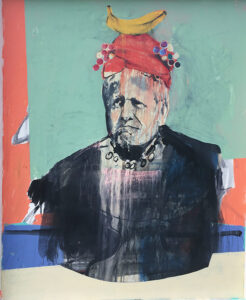 Take for example Carmen Miranda, which depicts a morose and glum-looking Boris Johnson as the iconic Portuguese/Brazilian singer and actress, complete with a banana on his head. This comedy coupled with an underlying seriousness gives the concept of his On the Spectrum exhibition real power and resonance.

In clinical parlance, “on the spectrum” refers to Autism Spectrum Disorder, a developmental disability that can cause significant social, communication and behavioural challenges. Colour theory is also a central aspect to the show. These principles come from the Renaissance and are still prevalent in the modern era, especially in commercial advertising and design. We know that certain colours affect our mood and perception, with warm and cold colours provoking different emotional reactions. Colours are embedded into our language and expressions; they are signifiers and codes. Think of red and what immediately comes to mind? We naturally associate the colour with danger, warning and passion. We have an innate response to colour like children do when reaching for wax crayons.

For the exhibition at Fresco Gallery, Tom will paint seven separate rooms the colours of the visible spectrum as part of the artwork installation. “There is a lot of science behind colour and how it is used. I’m fascinated to see how that will feel like from room to room. Also, it will be different for every person, I feel that it will create a dialogue,” he says. “The curation of this show is very important, I sense that it will all happen in the last moment, when those selected paintings work against the coloured wall. There will be an instant when it all makes sense.” 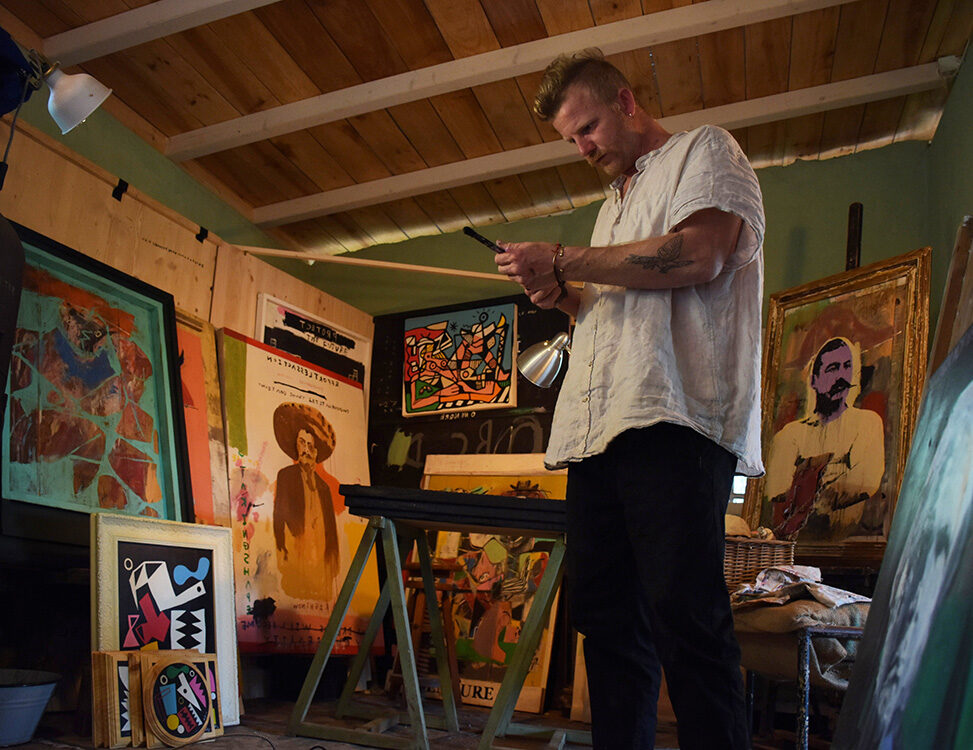 On the Spectrum will be interactive, a chance for the viewer to engage with the artwork in a real space that you move through. It will provoke a highly personal response and mixed reactions. As an artist, Tom Leamon delights in playful exploration and discovery, his practice is at times amusing yet profoundly serious. The exhibition tackles psychological and behavioural issues, but it is also life-affirming, especially in light of the recent collective confinement. “I see darkness and I see death, but I see life as a celebration, and I want this show to be a joyous experience. And you can find joy in anything.”

On the Spectrum will be on display at Fresco Gallery, Almancil, from May 13 until mid-summer.