A Degree of Diversity: Exploring Portimão’s ...

Historic Allure: A visit to An.. 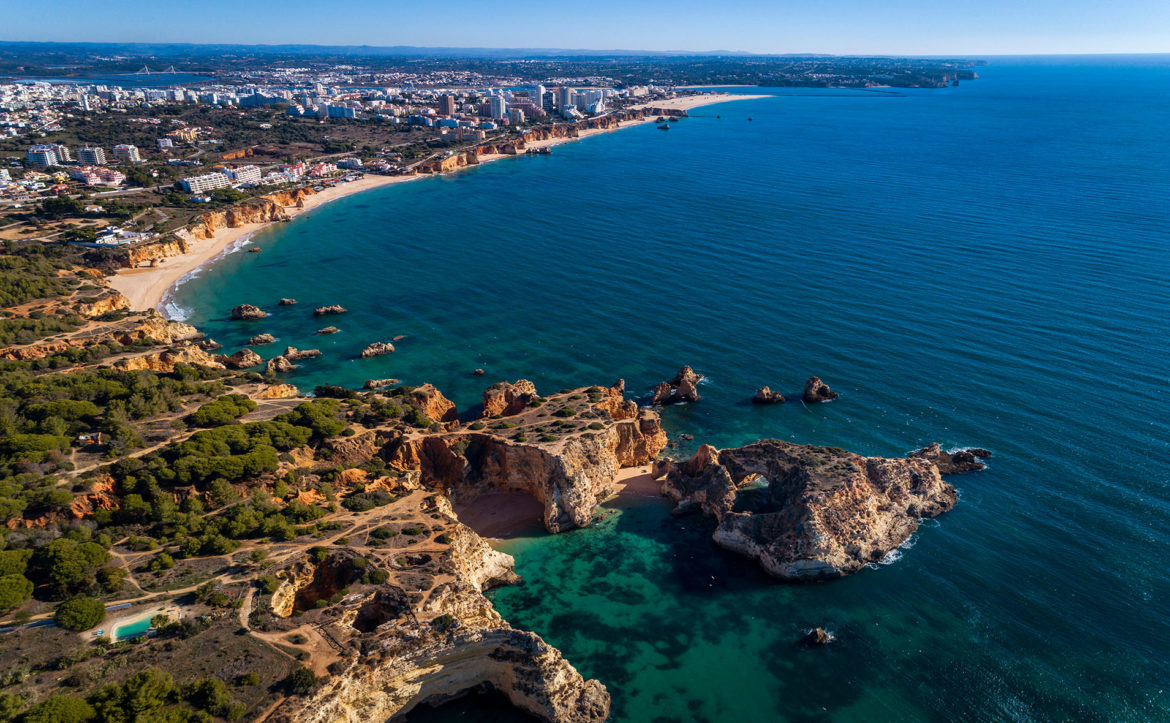 As the second-largest city in the Algarve, Portimão offers unique opportunities for property buyers

Located along the banks of the Arade River, Portimão is pleasantly picturesque with the charm of a traditional Portuguese working town. Once a hub for shipbuilding and sardine fishing, the Portimão of today is so much more than just a port city. “One word that I think describes it very well is diversity,” says real estate agent Gonçalo Miguel of Engel & Völkers Portimão.

The historic town centre spotlights a riverside walkway with open-air eateries, bars and cafes. Along with the wide variety of what Portimão has to offer, diversity is also increasingly present in the local community. Beyond just the busy season, the town still sees a surplus of “life and activity all year round”, according to Gonçalo. This is exactly why the agency’s managing director, Wilfrid Hoos, and his wife, Milka, chose this location for the agency after the pair moved to the Algarve from Germany. “One of the reasons why [my wife and I] bought a license for Engel & Völkers in Portimão is because you don’t only have second homes where people come during the summer and overpopulate the place,” Wilfrid says. “Here, there is life all throughout the year.” While other Algarvean resort towns fall victim to a dramatically fluctuating occupancy that revolves around the peak summer season, both Wilfrid and Gonçalo say that Portimão operates quite contrarily. The two mention how people residing elsewhere in Portugal along with places in northern Europe will often opt to skip the Algarve’s hottest months and instead plan a visit during winter, where the region’s southern climate is still far warmer than that of their hometowns. Additionally, according to data from the Instituto Nacional de Estatística (Statistics Portugal) comparing property transactions from 2018 to 2017, Wilfrid says there was “an increase of almost 25% from the previous year for the total number of property transactions in Portimão”. Backing up this statistic, Gonçalo says the company knows of at least 25 new developments happening in the area this year.

Portimão’s Sardine Festival alone shows that the town is continuously growing in popularity, with a record 100,000 people attending the 25th annual event last August — double that of the previous year’s number of attendees, according to an article in the Algarve Resident newspaper. Locally known as the sardine capital of the Algarve, it is no wonder how Portimão became home to the region’s “most famous sardine festival”.

When it comes to new properties, Wilfrid says there has been an increase for Portimão as a whole, referring to 2019’s market data from Confidencial Imobiliário, Portugal’s sole data bank with statistical facts about transaction prices and residential lease agreements. “In the past, there was almost nothing new, and whatever needed to be bought or sold was old,” he points out. “But as of the third quarter of 2019, 40% of properties on the market in Portimão are new homes, which is amazing.”

Outside of the city centre, Portimão boasts other lively areas, such as Praia da Rocha and Alvor. Praia da Rocha is just 3km south of the town centre, which Gonçalo describes as “one of the more active beaches in the Algarve”. This lively 1.5km stretch of sand is stocked with seaside restaurants, round-the-clock bars, water sports and everything a bustling beach town could have to offer.

Alvor’s appeal stems from the town’s rich history as an old fishermen’s village. Cobbled streets and fishing boats welcome a fresh outlook on traditional charm, while the Alvor estuary and boardwalk act as a haven for waterfowl — a must for avid birdwatchers. Alvor is also known for its wide range of world-renowned golf courses, such as the Penina Hotel & Golf Resort — with its three golf courses, including the Algarve’s first 18-hole Championship course designed by the legendary Sir Henry Cotton.

Hugo Silva of Hugo Silva Team – Real Estate Specialists believes Portimão’s property market is becoming “more mature”, with buyers primarily interested in investment potential — something Portimão certainly has. “You can really only look at real estate in two ways: you’re either getting money from it, or you’re losing money from it,” he says. Such is the focus for The Links, a new project at Penina consisting of a luxury condominium development currently under construction on the estate. Hugo is the project manager and sales team leader for The Links, and he and his team are managing and overseeing the entire 24- to 30-month construction process as well as the promotion and sales of all 64 units.

Spread across a 26,000sqm plot, The Links will feature four apartment buildings comprised of two-, three- and four-bedroom units (priced from €429,000 to €1,265,000), spacious gardens, three pool areas, covered parking and more. Hugo says that with the condominium’s ability to make a generous “5-6% net annual return”, he anticipates Alvor’s market will increase over the coming years. Parallel to the Penina Hotel & Golf Resort, Hugo says The Links project aims to revive the once-glamorous area, which was well-known in the 1970s as one of Europe’s premiere resort destinations. “Our goal is to have big, luxurious units, because there’s a market for that,” he states. “And it’s the market we want to be in.”

Speaking of luxury, both Wilfrid and Gonçalo agree that it is an aspect of high demand in Portimão — though new developments are not the only attention-grabbers. As a latest trend in the area, Wilfrid says people (especially foreigners) are increasingly purchasing old apartments to make complete refurbishments, such as with Engel & Völkers’ recent addition of a penthouse in Praia da Rocha. Though the building is over 30 years old, the three apartments located on the top floor were totally transformed into a deluxe penthouse, complete with four bedrooms and large terraces on two levels (bringing the overall space to around 700sqm). Currently on the market for €1,750,000, the penthouse sits steps away from the beach, and the private rooftop patio even accommodates a sauna, Jacuzzi and 360-degree view of the mountains, city and coast.

Outside of tradition, history, luxury and investment potential, Portimão also proudly protects its diverse ecological landscape. As one of the few spots along the Algarve’s Atlantic border that are not overflowing with as many coastal developments compared to others, Wilfrid says the town’s natural allure definitely stands out. “We see a lot of foreigners visit who are able to spot the difference immediately — especially when comparing us to the Spanish ‘costas’, where the landscape has been heavily damaged due to construction,” he explains. “Portuguese authorities have learned from both the neighbouring country’s mistakes as well as our own and have taken a more conservative approach to new coastal developments.”

At the beginning of 2019, Gonçalo says Portimão’s town hall rejected a project for several hotel plots inside the João de Arens coastal area in order to keep the landscape intact. While that is still an on-going battle, this is not the first time the council has sided with preservation. A few years ago in Quinta da Rocha’s nature reserve, Gonçalo says another touristic construction plan was rejected. Such instances have an added bonus of benefitting the real estate market, as conservation is becoming increasingly important to potential property purchasers. “Nowadays, we see much more informed buyers who are more concerned with sustainability,” Gonçalo says.

Mimicking this message, Hugo says sustainability is “constantly in mind” and at the forefront of Portimão’s property market — with The Links a prime example. One of the main highlights, he says, will be the condominium’s spacious, 1.9ha of native gardens in order to “bring nature” to the residents. “We had a lot of eucalyptus trees here, and we calculated how many were taken down in order to replace them with better-quality Portuguese trees,” Hugo says.

With Portimão continuously stressing the importance of everything that makes the city uniquely what it is, both Hugo Silva’s team and those at Engel & Völkers foresee the local real estate market continuing to rise. “Not to mention the oppressed demand after the housing crisis, when many construction companies went bankrupt and left half-finished works — many of which are now being resumed,” Wilfrid says. “People have gained more confidence, and the demand is there.”

Whether it be the beauty of Portimão’s lasting heritage, relaxed ambiance, eclectic beaches, preserved landscape or all of the above, the vibrant town is a treasure trove of tradition amid the Algarve. “Portimão truly has something for everyone,” Gonçalo says.