Born in Portugal in 1964, Gustavo Fernandes spent 13 years living in Canada, where North American culture had a profound impact on his artistic development. The art movement term for his style and technique is photorealism or hyperrealism, which first appeared in the United States in the late 1960s and early 1970s.

The genre evolved from Pop Art and gave the camera a defining role in the creative process. The overabundance of photographic images at the time led to an artistic reaction. Pop artists looked to re-invented celebrity and commercial images, (think Warhol’s Marilyn or his Campbell’s Soup Cans); photorealist artists, in turn, strove to reclaim the photographic image, in exact detail, often with a focus on the everyday scene. Early practitioners included Robert Bechtle, Charles Bell, Chuck Close, Robert Cottingham and Richard Estes. 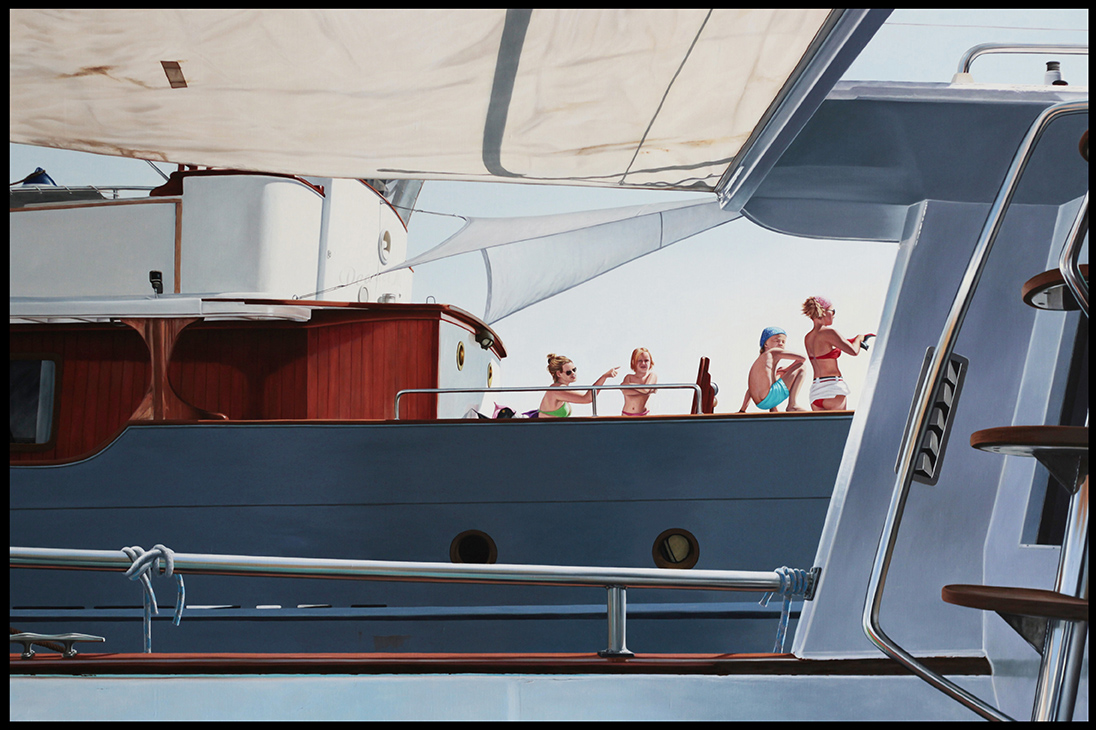 What interests Fernandes is the imagined moment that does not exist, that is not real but is created and captured in painstaking minutiae. In this Instagram era, with filtered sunsets and selfies, what we have here is a heightened reality. The fact that we are looking at a painting is never called into question. The image is crisp, the palette saturated and the composition carefully controlled.

It is unsurprising that there should be a renewed interest in photorealism these days, as it is instantly accessible. It reflects technical skill and plays upon our perceptions of representational truth. For Gustavo this is an almost obsessional practice: “When I start a work, I live for it and only rest when I reach perfection, as much realism as possible. I like to create works that involve people’s lives, their routine and the essential aspects to their lives.” 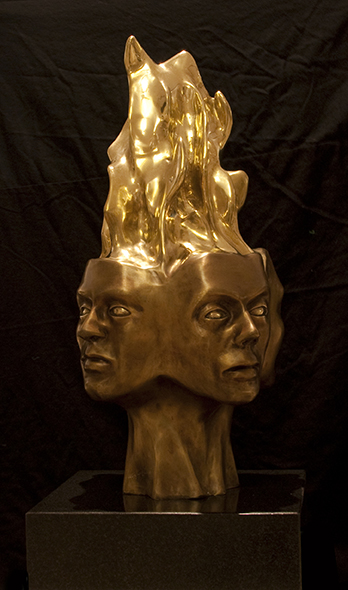 The painting process involves the artist choosing the subject, usually a friend, but sometimes a model. After a comprehensive shoot, he selects about 10 photographs and creates the work as a composite from the images. Therefore adding to the overall impression of fabrication and artifice.

At ArtCatto gallery, in Loulé, there are some excellent examples of Gustavo Fernandes’ fine work: A Moment in Time is perfectly constructed with a female figure’s back occupying the central part of the picture. The light, an essential feature of his work, shines brilliantly on the straw hat and dances on the surface of the exquisitely coloured turquoise sea. In the foreground is a collection of pebbles, rendered to perfection. The stones compliment the tones of the water, with a subtle colour variation of dark greens, blues and browns. The delicate highlights lend them solidity and mass. This close examination of the natural world is seen to a much greater extent in Gustavo’s remarkable landscape series. 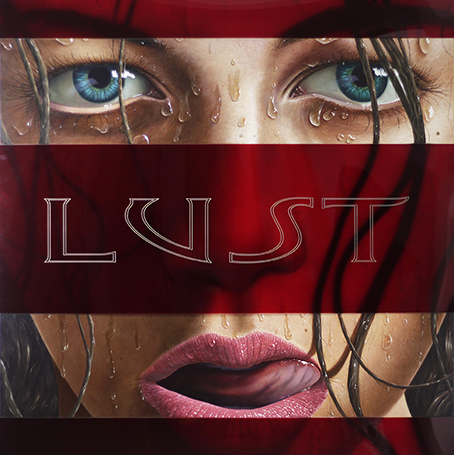 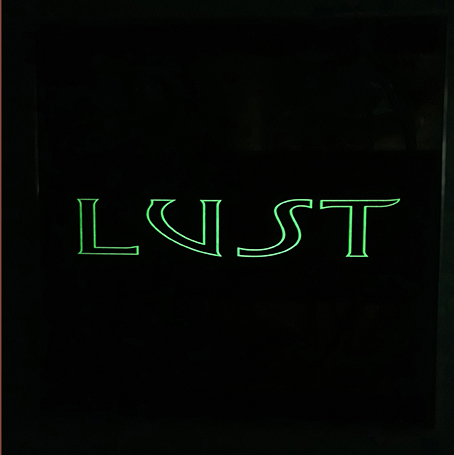 The scenes in his works go ‘beyond realism’, they are, as you might say, picture-perfect. It could be an image from a travel brochure for the Maldives, a glossy magazine shoot or a post from an influencer. In fact, there is a knowing seduction taking place as Fernandes plays upon the sexy allure of his subjects and the attraction of the locale. The women are coquettish with a come-hither look. This effect is heightened when the artist incorporates phosphorescence paint into the text over the work, making the nocturnal viewing of a painting like Lust strangely transformative.

The landscape series are perhaps more intriguing, as here we see the artist really looking and the results are mesmerizing. Take the piece Rising Sea, a sharp-focus micro-study of the foam from an incoming wave, frozen in time. 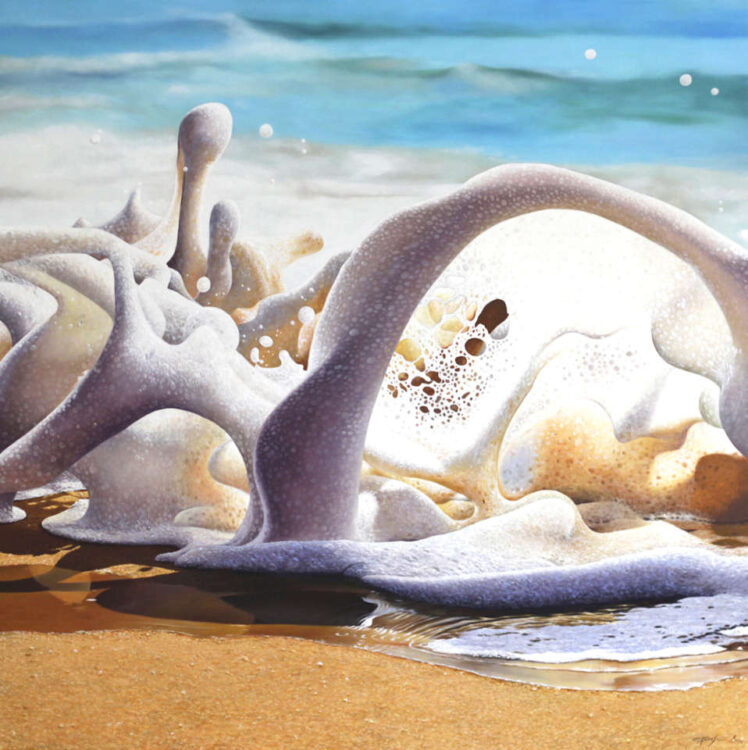 When asked about his artistic ambition, Gustavo says that he seeks out “stillness and serenity”. He certainly achieves that goal and clearly delights in the accurate depiction of these amorphous natural forms. His palette is saturated with vivid colour, the tonal contrasts striking with the effects of pure sunlight. The background sea convincingly blurs into a soft-focus of white and blues.

Gustavo Fernandes is an accomplished artist.He is clearly technically skilled and has mastered the delicate application of oil paint. He captures moments, be it an image of a woman relaxing in the water or an examination of the textures and contours of found driftwood on a beach. “I was introduced to Gustavo Fernandes’ sensational work and was immediately taken by it as I have always been a champion of hyperrealism,” says Gillian Catto, founder of ArtCatto. “Gustavo refines his work to such a high degree that it’s impossible not to be drawn into the imagery. His work is the ultimate statement piece.”

Gustavo Fernandes’ work can be found in numerous private and public collections around Portugal and internationally.