Labels of the Future: How the ..

A modern take on the classic ‘Grand Tour’ of Italy

It is not often one comes across an artist in the broadest sense of the word, but Andrew Kinsman is just that. He is a man for all seasons, someone who might have been described in years gone by as a Renaissance man. In today’s parlance, he is a multi- talented ‘slasher’ — a world-class visual artist, musician and filmmaker. 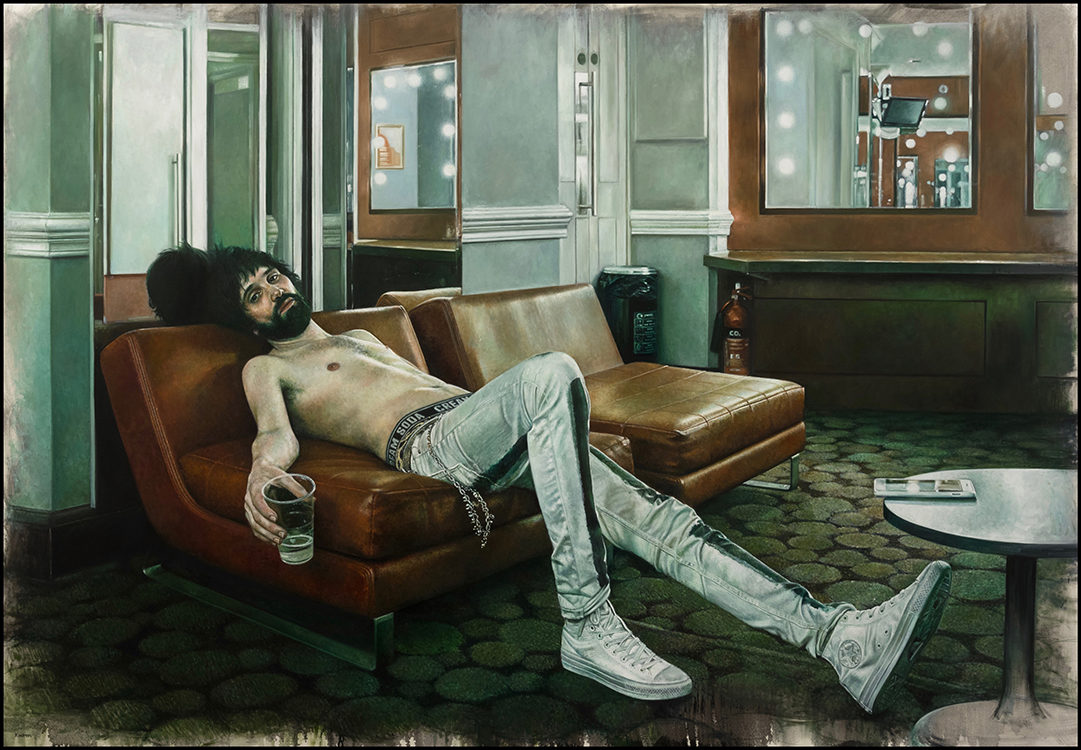 Andrew is a creative perfectionist, some- one who has to master a discipline, overcome the challenge ahead of him and achieve that goal. Very much like a mountaineer setting off from Mount Everest’s base camp, he is not afraid of the hard work and toil to reach the very top. “My goal is to make living art,” he says.

He was a precocious talent, selling his first portrait at the age of 12 and securing his first solo exhibition The Victoria Art Gallery in Bath at the age of 21. As the accolades flooded in for his artwork, Andrew took on another form of artistic expression as he took a break from figurative painting to pursue a career as a saxophonist. True to his nature and in spite of being a late learner, he be- came a very accomplished and in-demand musician. He toured with some of biggest names in the British music industry, including Kasabian, Noel Gallagher, Super Furry Animals and The Specials. 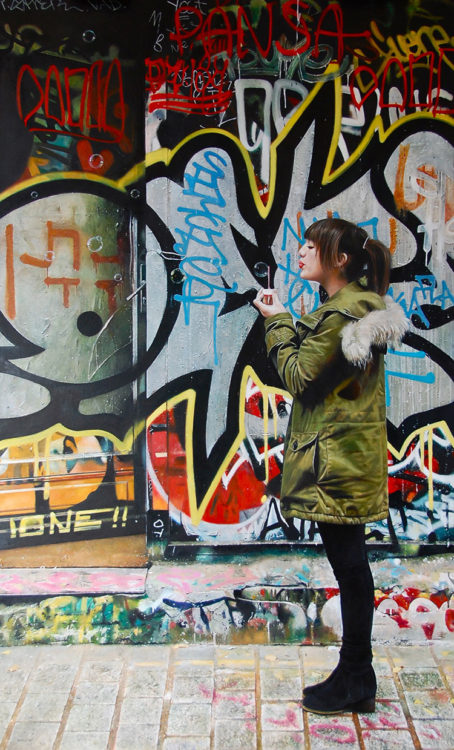 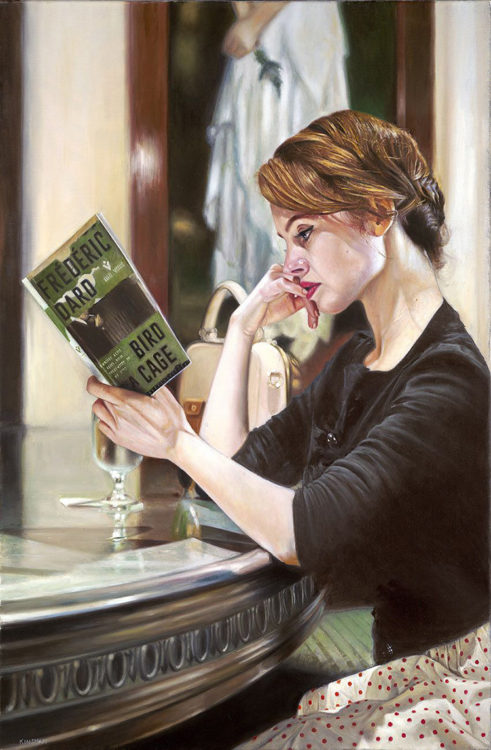 His experience on tour gave Andrew the perfect ‘backstage’ pass. It allowed him to create incredible portraits of lead singers, such as the one of Sergio Pizzorno, Kasabian’s front man, painted post-gig sprawled out on a sofa, spent after giving it his all. This startling behind-the-scenes painting was actually selected for the second round of judging at the BP National Portrait Award, the most prestigious portrait painting competition in the world.

But it was only a matter of time before Andrew returned full time to his primary passion. Through numerous commissions, he started building up a formidable reputation as a fine Realist artist. Portraits ensued of His High Highness Sheikh Mohammed, ruler of the Emirate of Dubai, Sultan Al Thani of Qatar, the American actor Rolf Saxon and celebrity chef Eric Lanlard to name but a few. 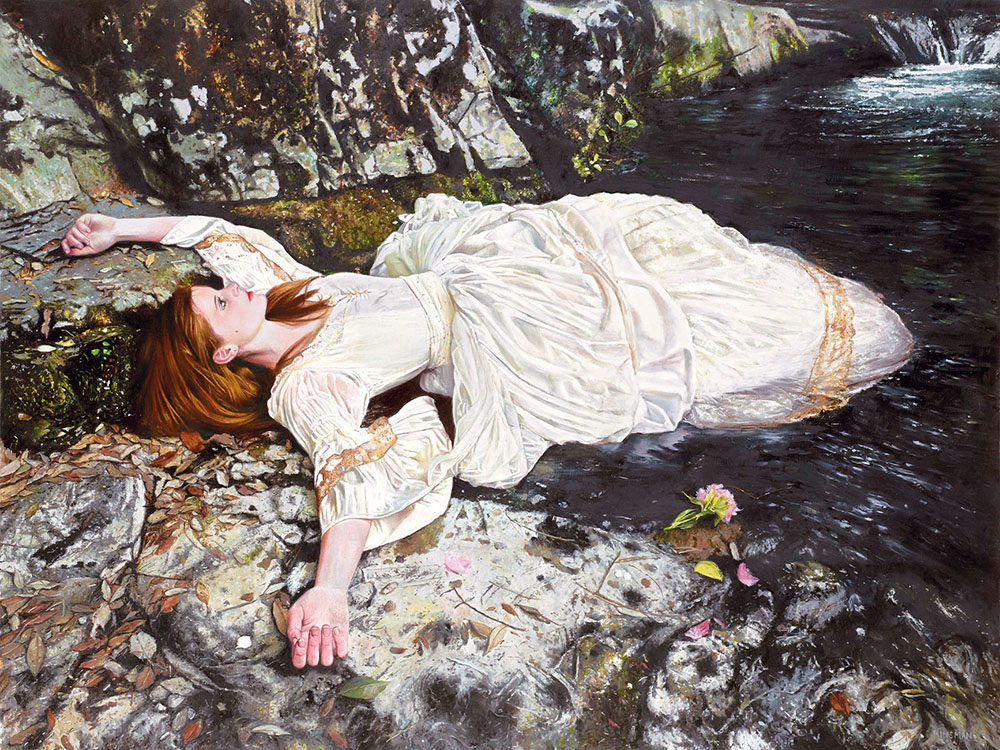 Halcyon, a powerhouse gallery in London, took notice and through the gallery there followed more prestigious commissions, including a portrait of wealthy and powerful Lebanese Hariri family and the Saudi Juffali family. Working with Castle Galleries, the UK’s leading limited-edition print and original art retailer, Andrew produced a series of prints, which were in turn snapped up. In 2011, Andrew was selected for the BBC TV programme Show me the Monet and then in turn exhibited at the Royal Academy of Art. Later, he was given the honour by Royal Mail to paint Football Heros, a series of 11 stamps to commemorate 150 years of league football. Among the legends featured were Sir Bobby Moore, George Best and Dennis Law. He also briefly returned to the musical stage, playing festivals and international concerts.

For Andrew Kinsman, representation is everything, from fine detail to delicate brushstroke of the painted surface, and he is no stranger to the canons of art history: the portrait of Sergio Pizzorno is a nod to Caravaggio’s Bacchus with the outstretched arm, holding a drink. He cites other great Masters of the Renaissance such as Titian as an influence on his work as well as the Dutch and Flemish School. 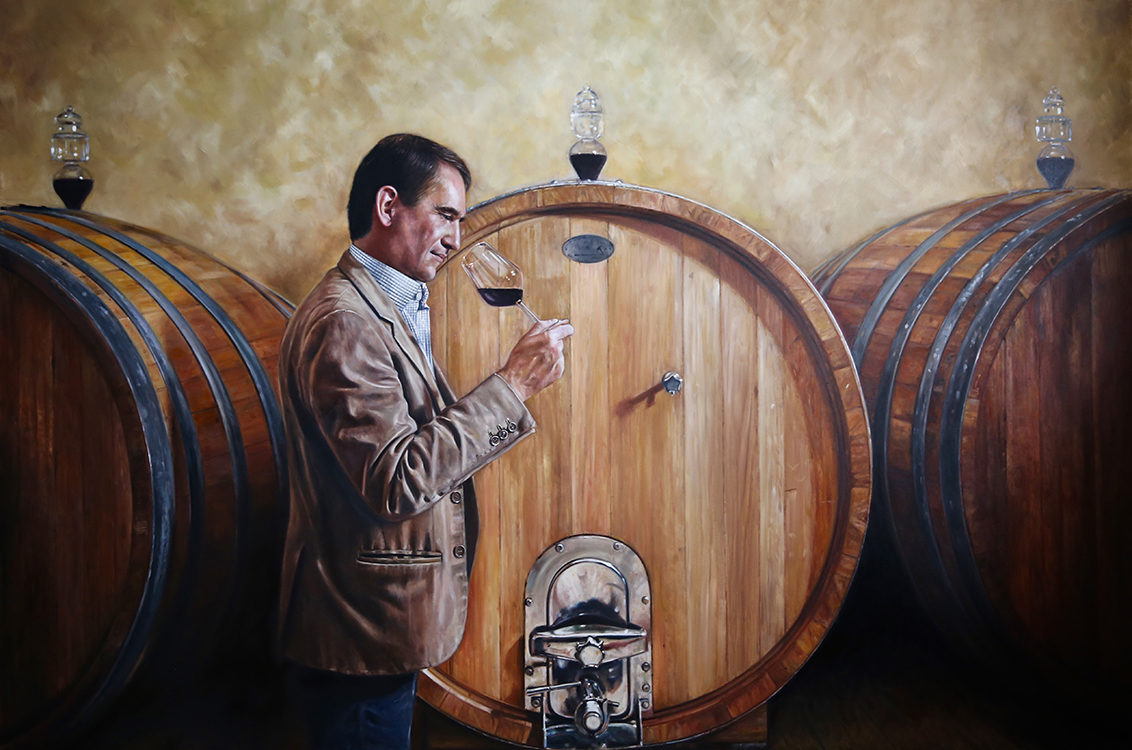 When done well, visual art creates a powerful narrative. What also interests Andrew is how filmmaking can also add another dimension to the drama. Hence, for his current series, Painted Lives, he relocated to Pisa, Italy, to develop a modern take on the ‘Grand Tour’. This idea dates back to the 17th century, whereby high society would travel around parts of Europe, especially Italy, and shop. The reason so many Canalettos are in the Queen’s collection is a direct result of this acquisition of culture. The title of the series refers to great artist and historian Giorgio Vasari, whose Lives of the Most Excellent Painters, Sculptors and Architects is considered the cornerstone of art-historical writing. 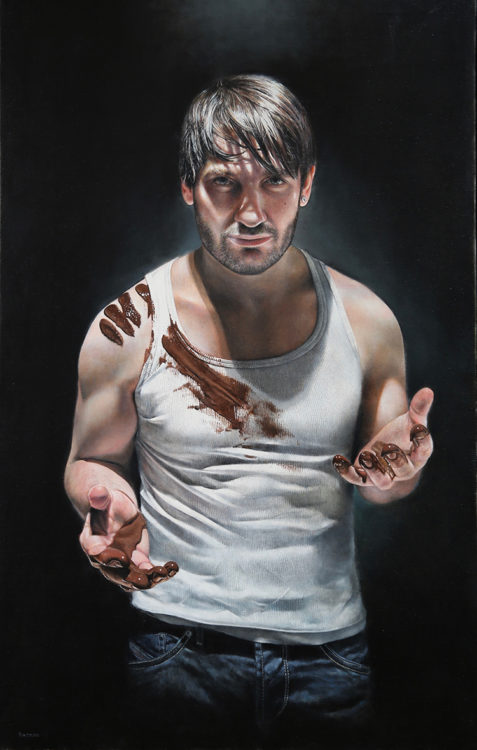 In his short films, a little vignette accompanies each of the portraits produced. This is cross section of Italian society. “Italy is the land of human nature, and human nature is full of contradictions,” Andrew explains. For example one portrait is of Filippo Gaslini Alberti, a nobleman famed throughout Italy, and another is of a champion boxer. These beautifully crafted films have the subjects talking about their lives in their own words, an intimate portrayal of their inner world. Andrew wants to place the ‘Grand Tour’ into a contemporary context. In part, this is a travel documentary but more than that, these portraits and accompanying films are beautifully constructed insights into an interior world. 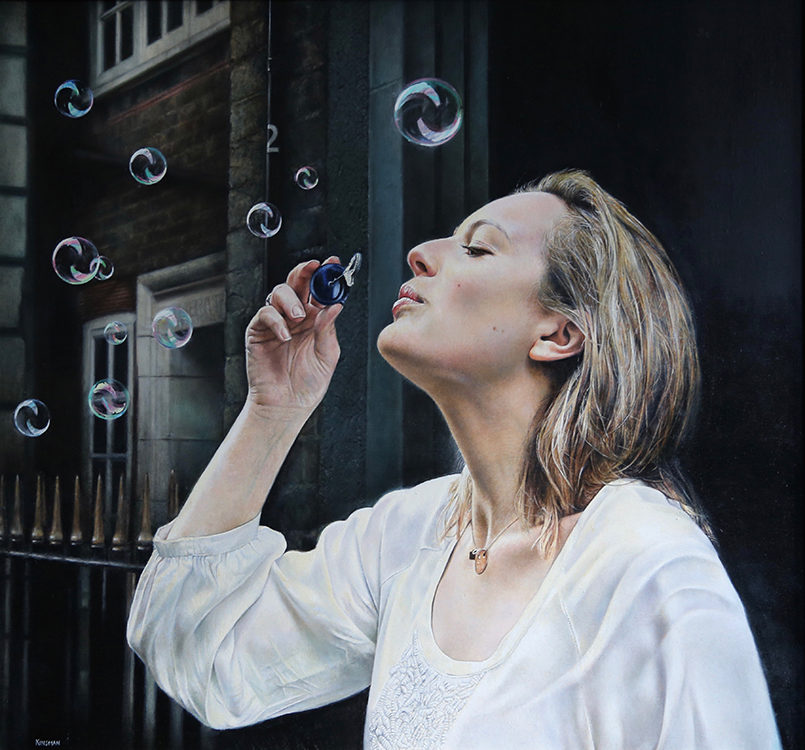 In many ways, social media has changed the way we view art and to some degree how art is made. Andrew is acutely aware of the power of digital communication and the way that it can reveal the process. The addition of a short film clip is tailor-made to enhance the experience of online viewing. “I want to combine pictorial and cinematographic art so that one flows into the other, in a process that puts the soul and psychology of the subjects portrayed at the centre of my investigation and examination,” he states.

As a craftsman artist, the vital component for Andrew is the labour-intensive making and fabrication of his pieces. Here we have a painter who is as confident with a brush as he is with a saxophone — both instruments and tools in the hands of an artist who strives for perfection and harmony.

Andrew Kinsman will be exhibiting his Painted Lives series at Conrad Algarve between July and August. 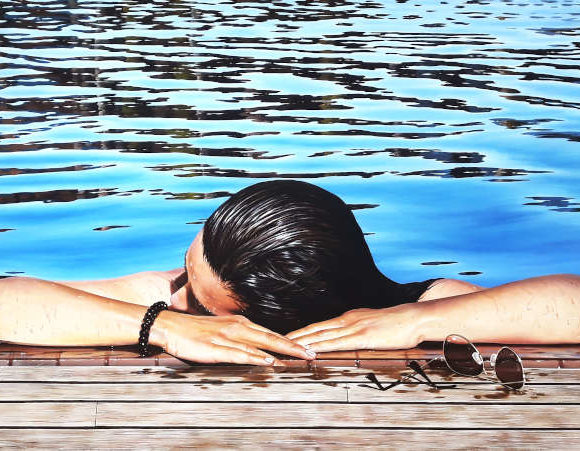 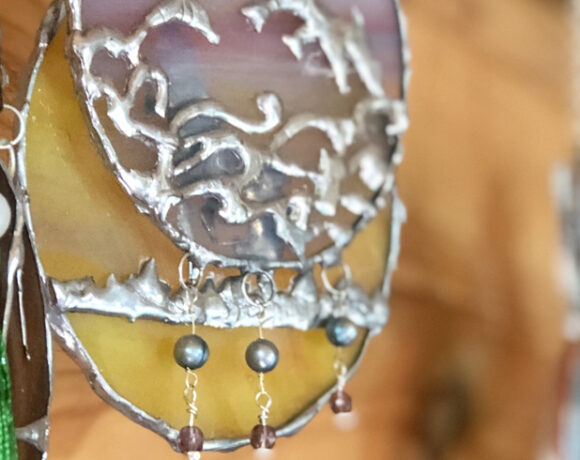 Through the Looking Glass: Behind-the-scenes of stained glass art 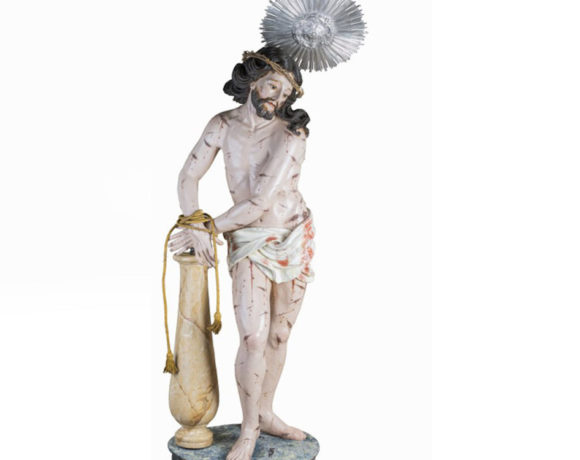