Through the Looking Glass: Behind-the-scenes of st...

Through the Looking Glass: Behind-the-scenes of stained glass art

Exploring the process of stained glass art with Liza Walker

Tucked away in the tiny village of Almádena, in Lagos, on a lush plot of land, there lives three dogs, two cats, two pigs, a cockerel, a pair of canaries, and the eccentrically colourful work of stained glass artist Liza Walker. 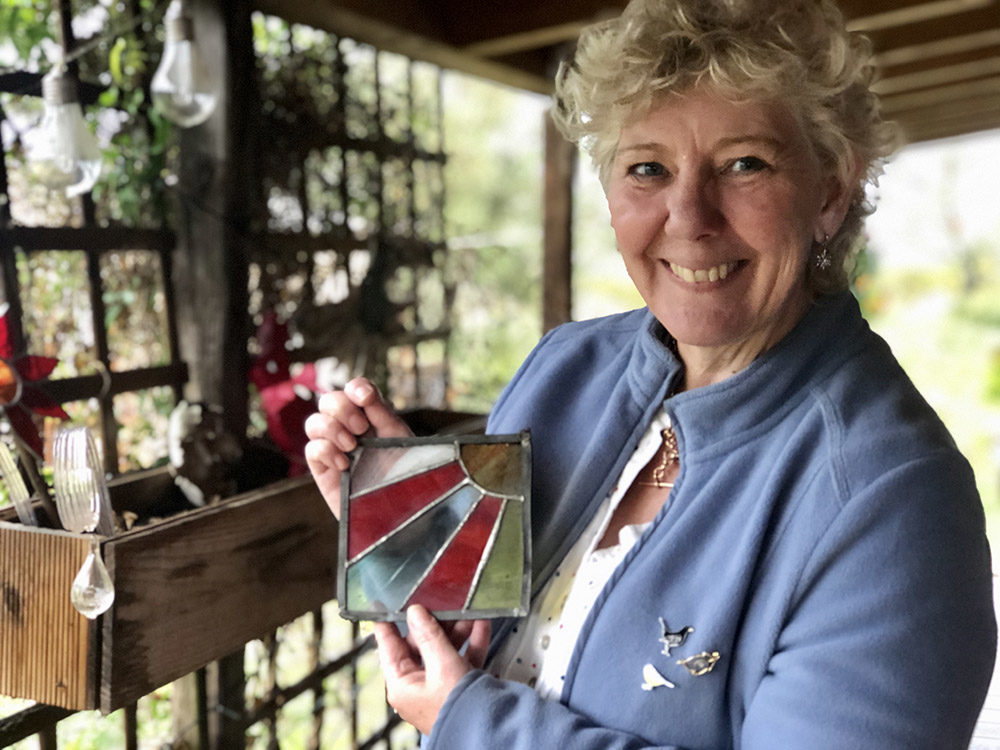 Originally from Surrey, UK, she has been living in the Algarve for the past 22 years. Though she keeps busy working full-time during the summer, around five years ago, Liza says she realised she was left with a lot of free time in the winter, meaning it was time for her to adopt a new hobby — or rather, a new craft. A creative at heart, she signed up for stained glass art classes in 2016, which were taught by a woman named Roë Holcome at a studio called Glass Act Studio in Burgau.

Liza says she instantly fell in love, telling Roë that she would be back again the next year to continue. But before she got the chance, Roë and her husband sold their house in the Algarve and moved back to England, leaving Liza with both newfound knowledge of and growing desire to learn more about stained glass art. “Once you get consumed by something, you have to do it,” she says. “So I thought ‘Well, I’m just going to have to do it myself’.” 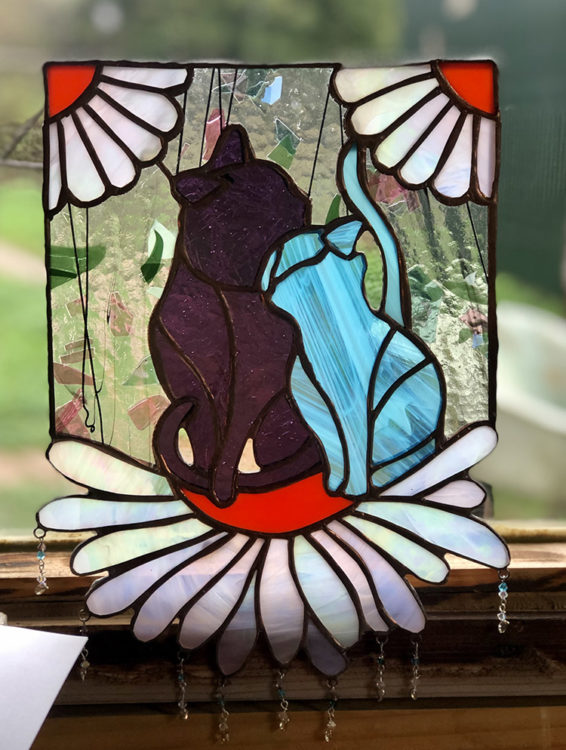 Around that time, Liza’s husband, Rick, gifted her a stained glass starter kit for her birthday. She first set up shop in her kitchen, where the breakfast bar doubled as her “studio” for months. “Until one day, Rick mentioned I was getting on quite well with this and that it might be time I had a shed,” Liza recalls. “And I thought it was a brilliant idea… though I think Rick was just slightly worried about getting glass in his dinner.”

After Rick built Liza her workshop, she wasted no time decorating the place (inside and out) with gleaming examples of her work. Hanging on the outside is a little sign that sums it all up for her: “To you it may only be a shed but to me it’s a sanctuary.” 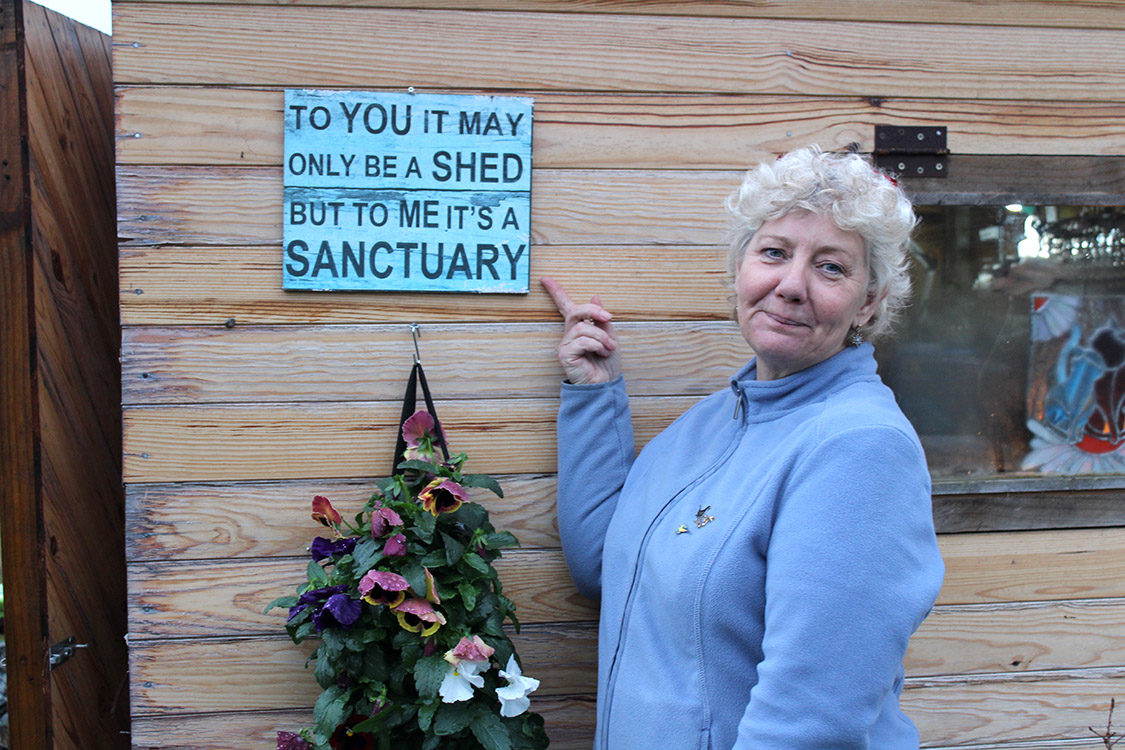 At roughly 3×3 metres, the “studio” is stocked with shelves overflowing with colourful sheets, shards and slivers of glass (ranging in all sorts of shapes, sizes and even textures). Liza says she purchases glass from shops in the UK about three times a year (spending around £550/€650 annually). When it comes to picking out the particular pieces, she says she chooses glass based simply off what she likes and lets the ideas come later. “I rarely order knowing what I am going to do with the specific glass pieces,” she says. “You keep the glass until it tells you what it wants to be.” 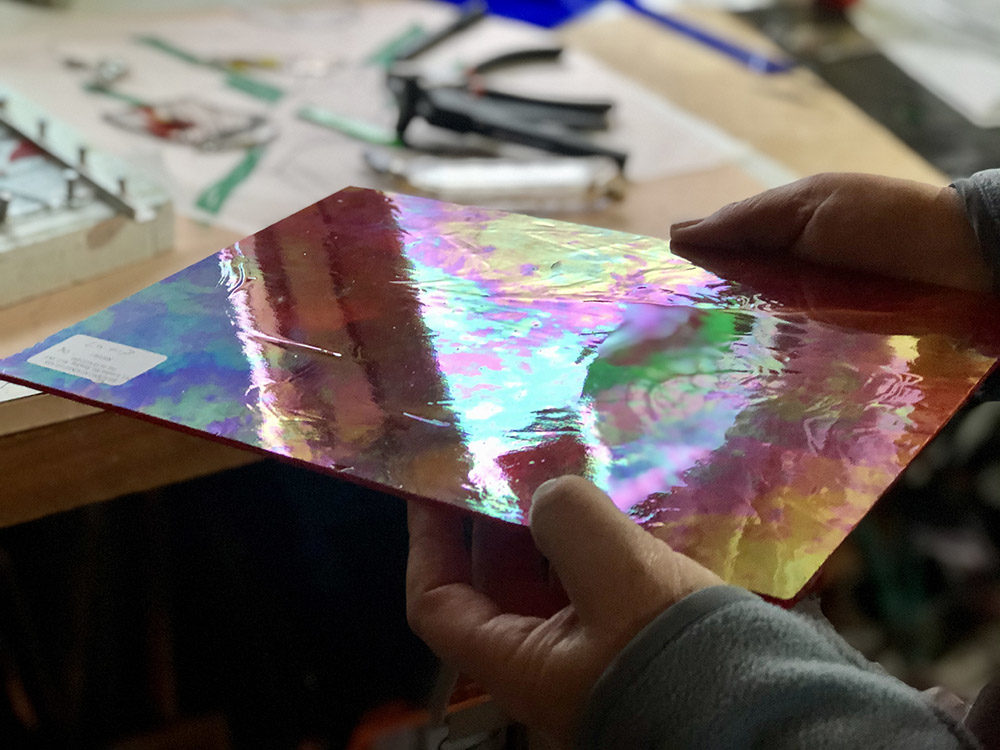 Over the past three years Liza has been crafting stained glass, she says she has created hundreds of pieces, which have either been sold or decorate her own home. As of last winter, the artist decided to take her pas- sion one step further and started teaching stained glass art herself — though she does so from beyond the limitations of her tiny sanctuary of a shed. Liza’s “classroom” sits just a few hundred metres away from her own home in a comfortable studio dubbed “The Glass House Algarve”. Since beginning her lessons, she says she has welcomed roughly 30 students to date (with her class sizes limited to four people as to ensure she can better provide individual guidance). Her classes are offered from October to April, with the eight-hour workshop spanning over two consecutive days.

In the traditional method of stained glass (think church windows), the individual pieces are put together using lead. Besides its toxicity, the major drawback of this method comes with the heavy weight of lead. This often causes stained glass pieces, like windows, to “buckle” if not properly cared for, Liza says. Instead, she opts for the copper- foil method developed by artist Louis Com- fort Tiffany. Louis is well known for his crafting of stained glass Tiffany lampshades, which Liza says was the inspiration for his creation of the copper-foil technique (as lead would not have worked with such delicate designs).

It all begins with a design on paper, then comes the official first step: breaking the glass. The basic tools for this step, Liza says, are glass cutters, running shears, breaker-grozier pliers, a pen, and — of course — glass. Showing how to make a cut, she uses a pistol-gripped, diamond-tipped glass cutter and carefully carves a line on the surface of her sheet of glass. Liza says the amount of pressure applied is crucial, as you want to make it hard enough to indent the glass but soft enough as to not gouge it. After making the surface cut, she aligns a pair of running shears over the traced cut and gently clamps down, resulting in a clean break. Any difficult shapes have to be specifically cut from the glass (such as curves), Liza says, which can be done using a circular saw. During her lessons, she spends the first hour familiarising students with this step by practicing cuts on plain pieces of window glass. 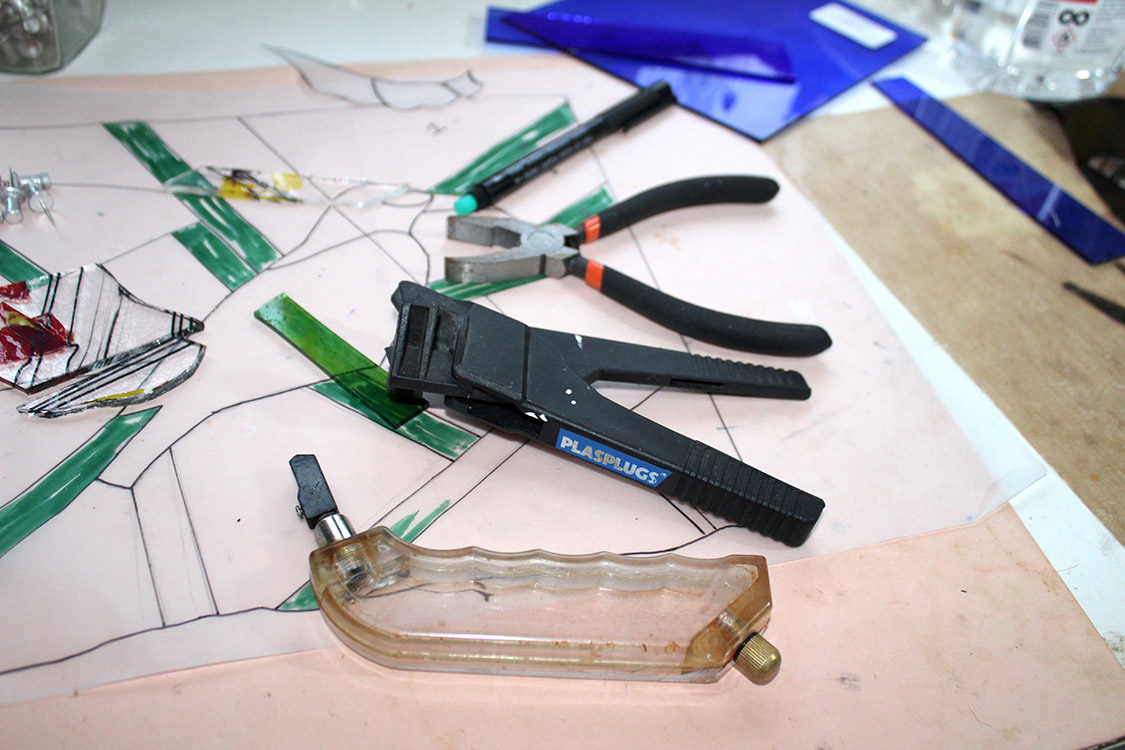 After cutting, she uses a grinder to smooth out the sharp edge(s) of the glass to remove its bluntness. She then takes a spool of cop- per foiling (with one side sticky like tape) and outlines the edges. She repeats this on all the sides for every piece of glass to be used in the project. Next, Liza says she coats the copper edges with an acid flux and then works with a soldering iron and solder to adhere each piece together, creating a permanent puzzle. While solder appears as a pencil-like grey colour, different shades can be made using a substance named “patina”. 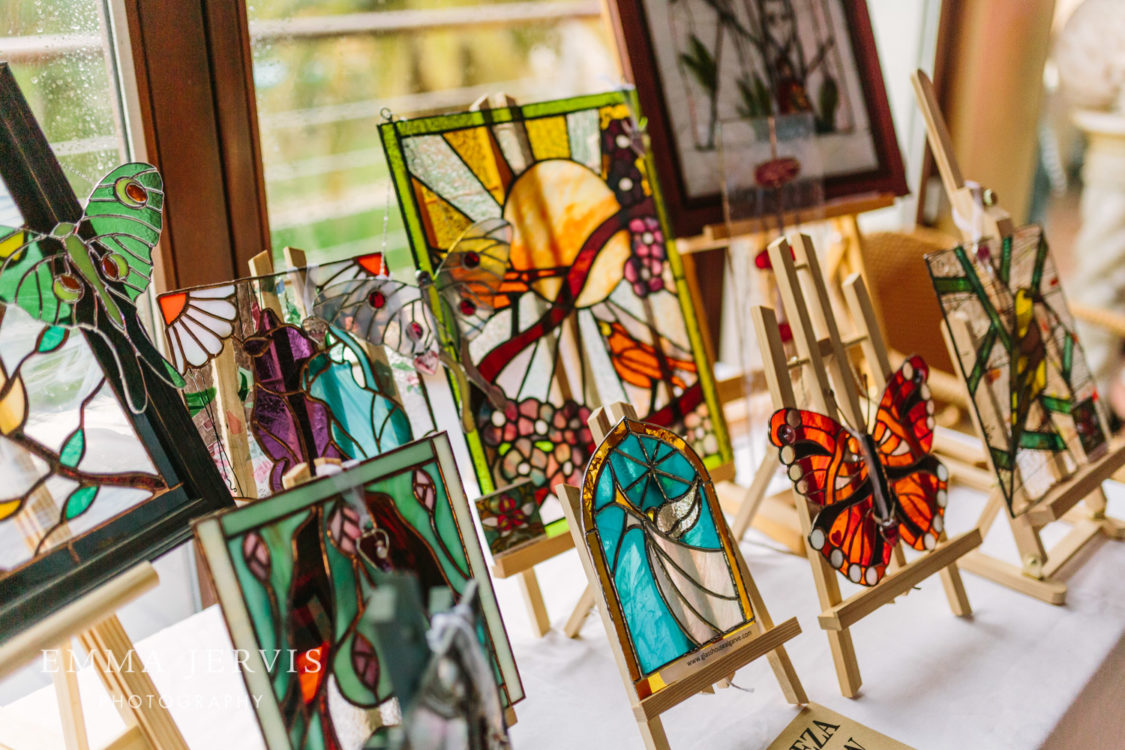 “And there you have it — the process of stained glass art,” she states. “A lot of the reactions are ‘Wow — I didn’t realize it was this complicated’, while other reactions are ‘I just love this! I want to come back and do it again.’” After the initial two-day starter course, the artist says she is happy to invite former students to come by for “drop-in” classes, allowing them to visit the studio and create pieces using her equipment and personal guidance.

“The more interest you have yourself in something, the more you will interest other people,” Liza states. “And with glass, I’m always fascinated.”