The Algarve-native is a textile artist for our times

As theoretical physicist, Richard P. Feynman once said, “Nature uses only the longest threads to weave her patterns, so that each small piece of her fabric reveals the organization of the entire tapestry”.

Vanessa Barragão was born in Albufeira, where she spent her early years exploring the abundant coastline of the Algarve, leading to a profound connection to the Ocean. As child she would comb the sands for many marvellous shells, twisted and weather-worn driftwood and sea-patterned pebbles. Her love for all living things is deeply woven into her textile art practice. We see Romanticism in her work, the notion of the sublime and awe of the all-powerful creative force that formed such natural wonders. 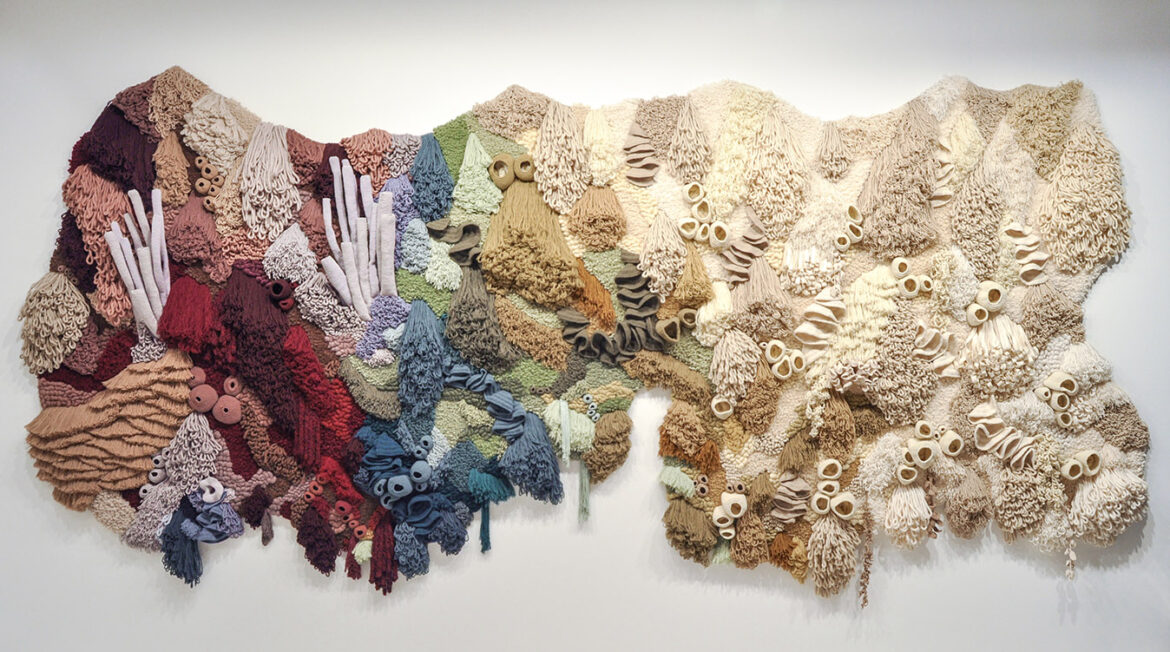 Vanessa achieved a master’s degree in fashion and textile design at Lisbon University, exploring the possibilities of yarn and tapestries with an interest in sustainability and ecology.

She had growing concerns with the fashion and textile industry as a whole, with certain manufacturers being a major source of global pollution with chemicals used in the treatment and dyeing process often ending up in our rivers and seas. In light of this appalling impact, Vanessa elected instead to work in an innovative way with recycled dead yarn stock and create ongoing awareness for our fragile environment and ecosystem.

In 2016, she relocated to Porto, the traditional home of the textile industry in Portugal, where she honed her artisanal skills working as a designer in a rug factory whilst developing her own projects and pieces. Vanessa’s labour-intensive and exquisitely crafted tapestries, rugs and wall hangings are fabricated using various textile techniques based on ancestral practices, such as latch hook, crochet, felt, weaving, embroidery and macramé. They evolve organically, with a rich array of textured, coloured yarn and undulating forms of fabric. As with a good abstract painting, we have clever and well-thought-out compositions of amorphous shapes and patterns. 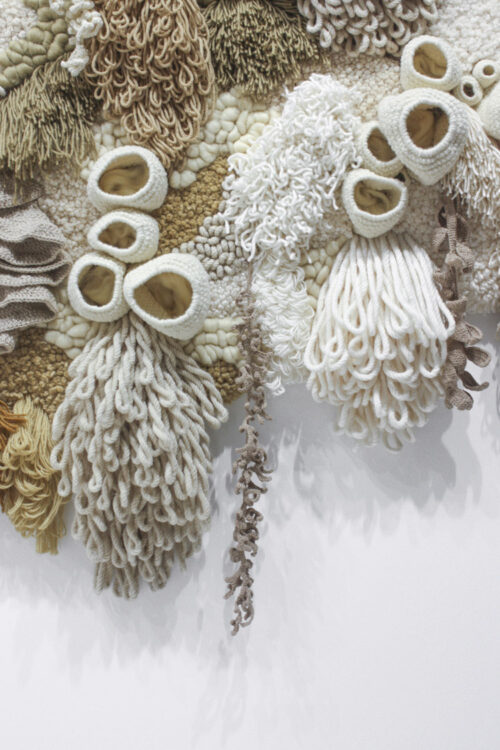 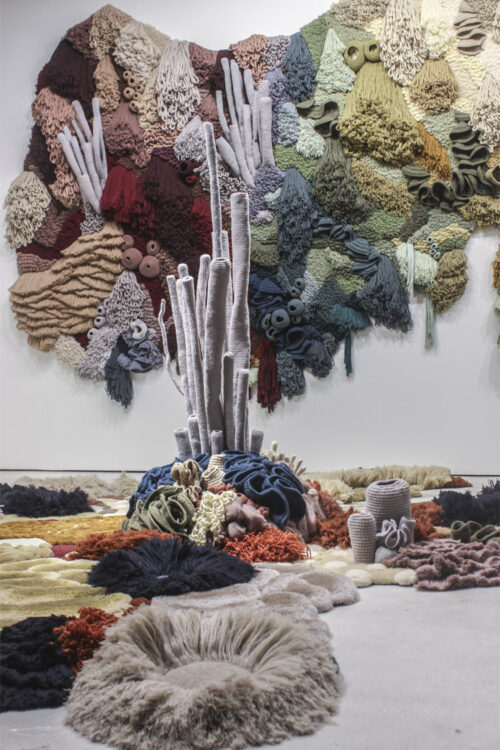 Coral Garden is one of her most visually striking pieces, as it depicts the direct effects of climate change on coral reefs. Over half a billion people depend on reefs for food, income and protection. On the left-hand side of the work, we have healthy, vibrant and saturated coral, which transitions slowly into faded and muted neutrals. This is called coral bleaching, which is caused by a rise in temperature that drives out the algae.

“In my childhood, I used to travel a lot with my parents to the Caribbean, where I got very excited at seeing for the first time coral reefs in Jamaica. This experience stays in my mind like a photograph,” Vanessa explains. “All the colours and life present there were the most impressive and beautiful thing I have ever seen. Year after year we used to travel to this area of Caribbean Sea and the degradation of the coral reefs was more in evidence every time we visited. The corals losing their colours and the loss of biodiversity in the area troubled me greatly.” Coral Garden was exhibited at Vanessa’s solo exhibition at the 2019 Domotex, a leading trade fair for floor coverings. 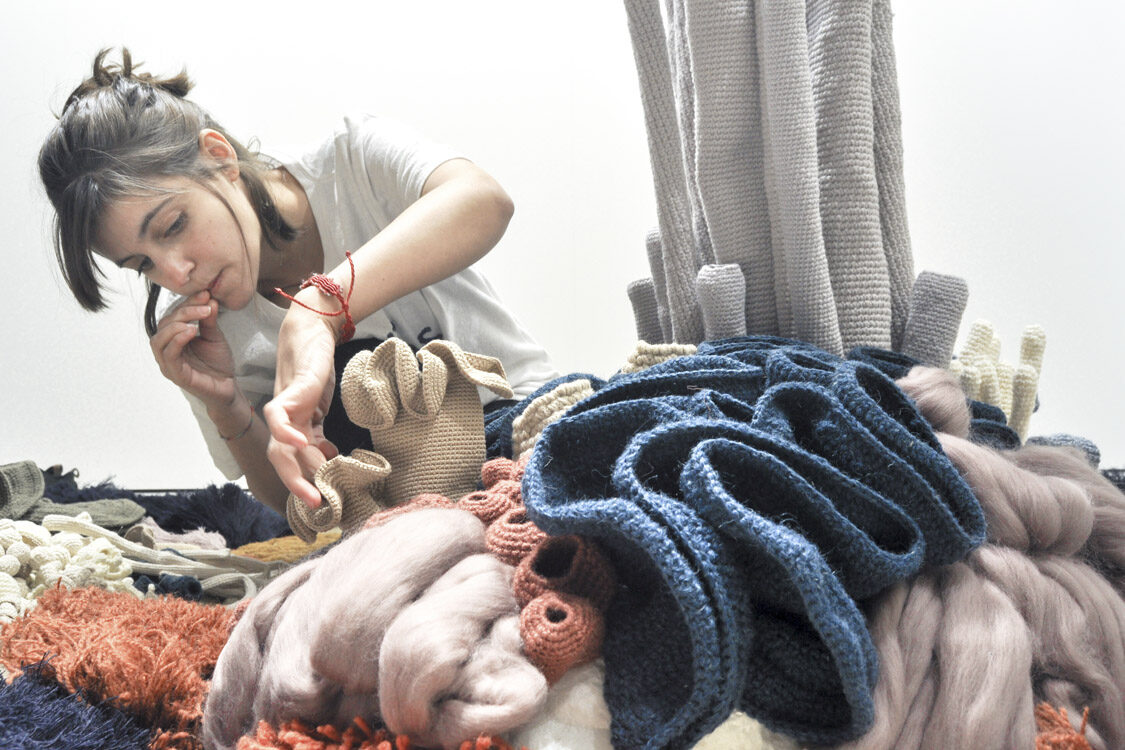 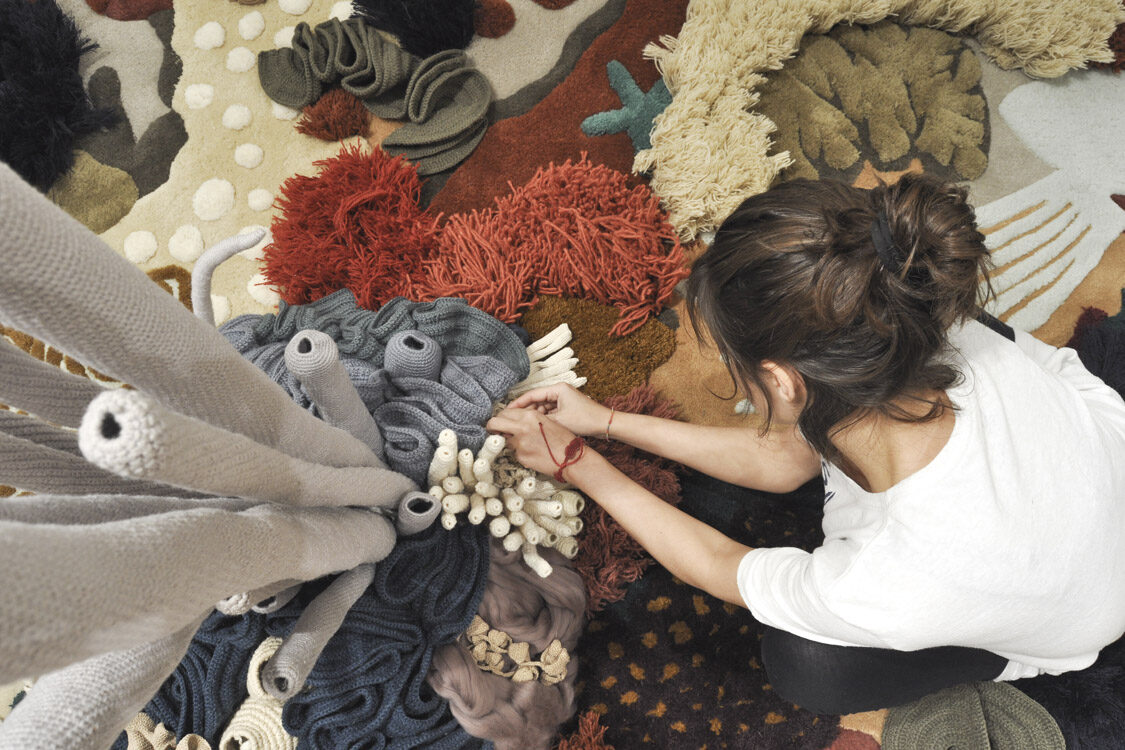 Another strong piece is Botanical Tapestry, which was commissioned by Heathrow Airport and Kew Royal Botanical Gardens in 2019. This is a brilliantly coloured map of the world; a timely reminder of how interdependent the whole planet is. Here we have the white ice sheets of the South Pole at the bottom, the lush green Amazon rain forests of Brazil and the arid sandy deserts of Africa and the Middle East. Each region connected by the weather and the changing seasons.

In another piece, Vanessa veers towards abstraction, as seen in Living Coral, which is currently being exhibited at the Palácio de S. Bento — the official home of the Portuguese Prime Minister — having been previously exhibited at Onefifteen, in Taipei. This is a gorgeous piece, a riot of colour with a tactile surface that in parts have loose threads hanging down, much like the drips of paint that one might see on a canvas. 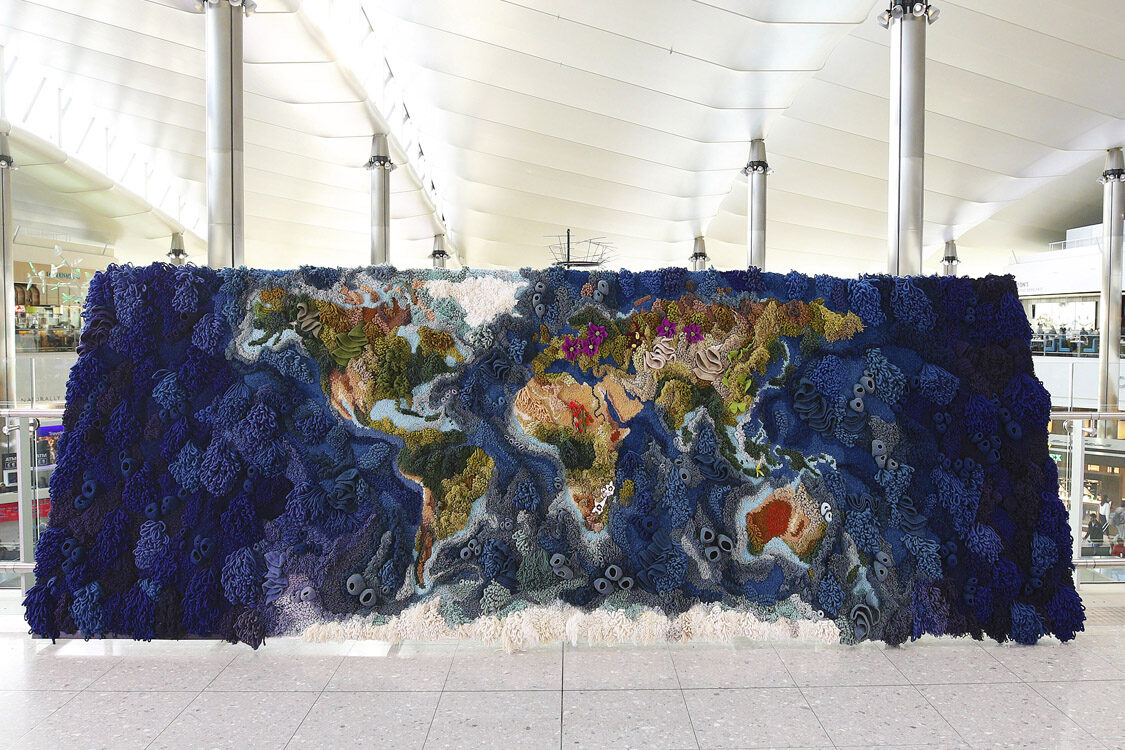 The distinction between designer and fine artist is becoming increasingly blurred. Textile art has been gaining prominence of late in the contemporary art world with artists like Sarah Zapata, Liz Collins and Nick Cave forcing museums, critics and curators to evaluate the medium, which was primarily looked at as “women’s work”. In fact, there is a strong 20thcentury tradition of textile artists who, like Anni Albers and Sheila Hicks, laid the foundation for the next generation to come.

Perhaps in this digital age, with its constant stream of instant images, we have developed a healthy admiration for artisanal craft and for work that directly deals with social and environmental issues. Artwork that is painstakingly produced using techniques that have been handed down through the generations. Vanessa acknowledges this debt of gratitude: “Craftsmanship has been in my family forever and I had the pleasure and good fortune to learn from them and use it to express my feelings and vision. Otherwise, maybe my reality would be completely different, and odds are that I, perhaps, wouldn’t have become the textile artist that I am today.”

Today in her immaculately designed studio in Albufeira, Vanessa has a small but dedicated team and is surrounded by plants and natural elements with inspirational music playing in the background. “My studio is my home, it’s where I feel happy, well and safe; where I can be myself and express my feelings and ideas. It’s a place that represents inner self and is basically a mirror to my nature. So, it is almost ‘natural’ to have a place full of greenery, natural light and beautiful music. It’s a flow of my essence through time and space,” she states.

Over the summer, Vanessa will be creating an installation at Fresco Gallery in Almancil. Her global popularity and appreciation for her fine work can be seen by the growing numbers of followers she has on Instagram, at just under 200,000, and she can be found at vanessabarragao_work.