Living Armona: Sustainability with a view

Living Armona: Sustainability with a view

A communion between nature, peace, tranquillity, good food, security and friendly people, which hardly exists anywhere else — this is how Sílvia Carvalho, architect at Lux Projects, responsible for the project of the first Living Armona holiday lodge, describes the atmosphere experienced in the most recent house overlooking the Ria Formosa, a stone’s throw away from the beach, inserted in one of the barrier islands, in the municipality of Olhão. 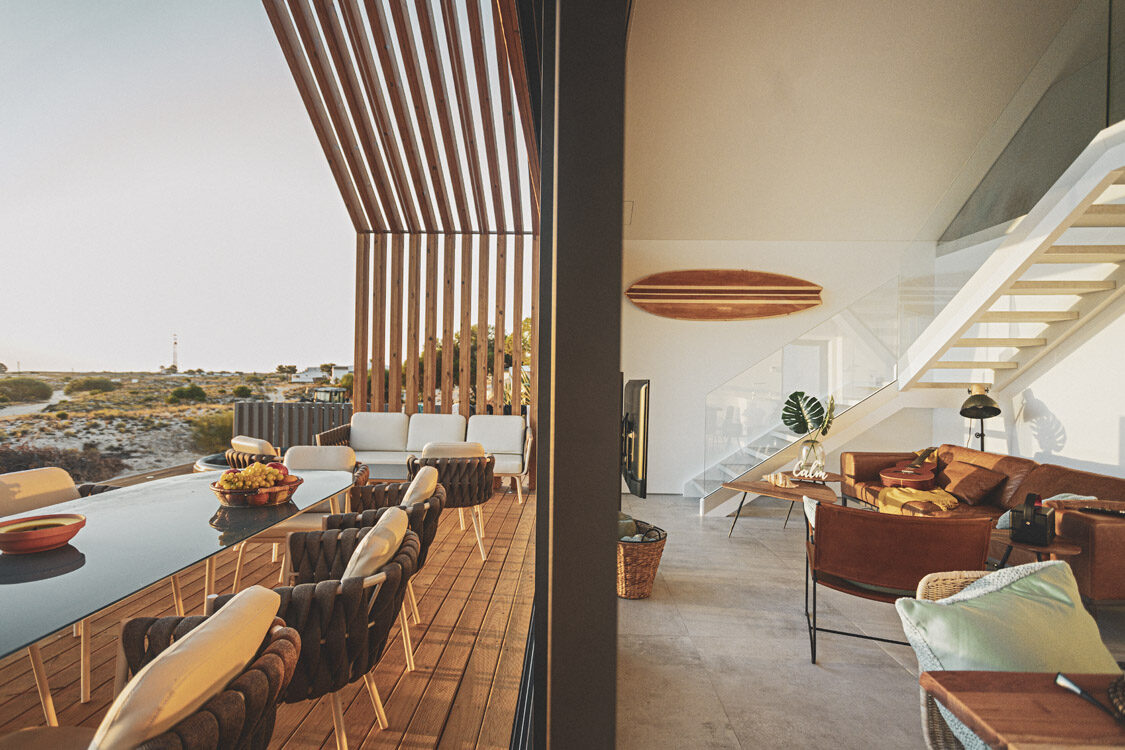 With 123 square metres of usable floor space across two levels, there is a mezzanine, three bedrooms, including one en-suite, kitchen and living room. Outside, guests will find a terraced area, with a built-in Jacuzzi, outdoor shower with hot and cold water and even a fireplace. All these features give the lodge all the amenities for holidays at any time of the year. There is also a barbecue area and a Japanese-style garden, with beach sand and vegetation.

The house is fully equipped, and even has a climate-controlled wine cellar, reveals Sílvia Carvalho. According to the architect, the inspiration followed a very simple trend: “Bringing the outdoors inside.” Natural elements and fibres such as thatch, sisal and cotton are paired with wood, the material that makes up the entire structure, in homage to nature that is so typical of that island. 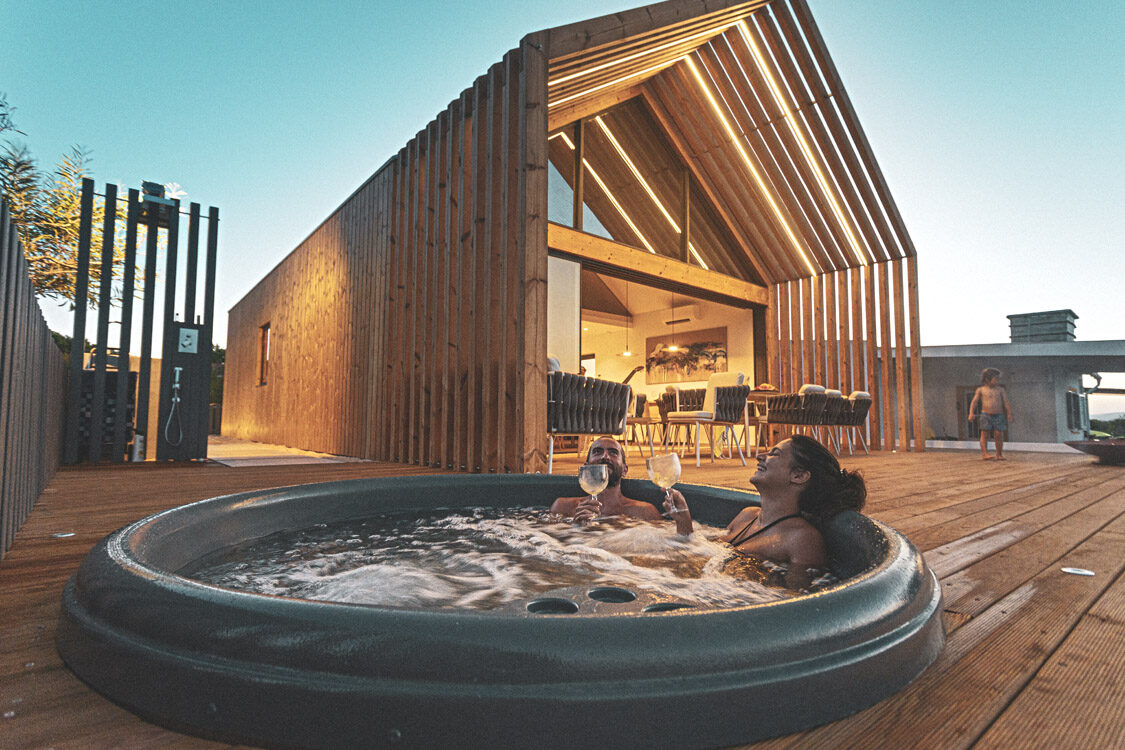 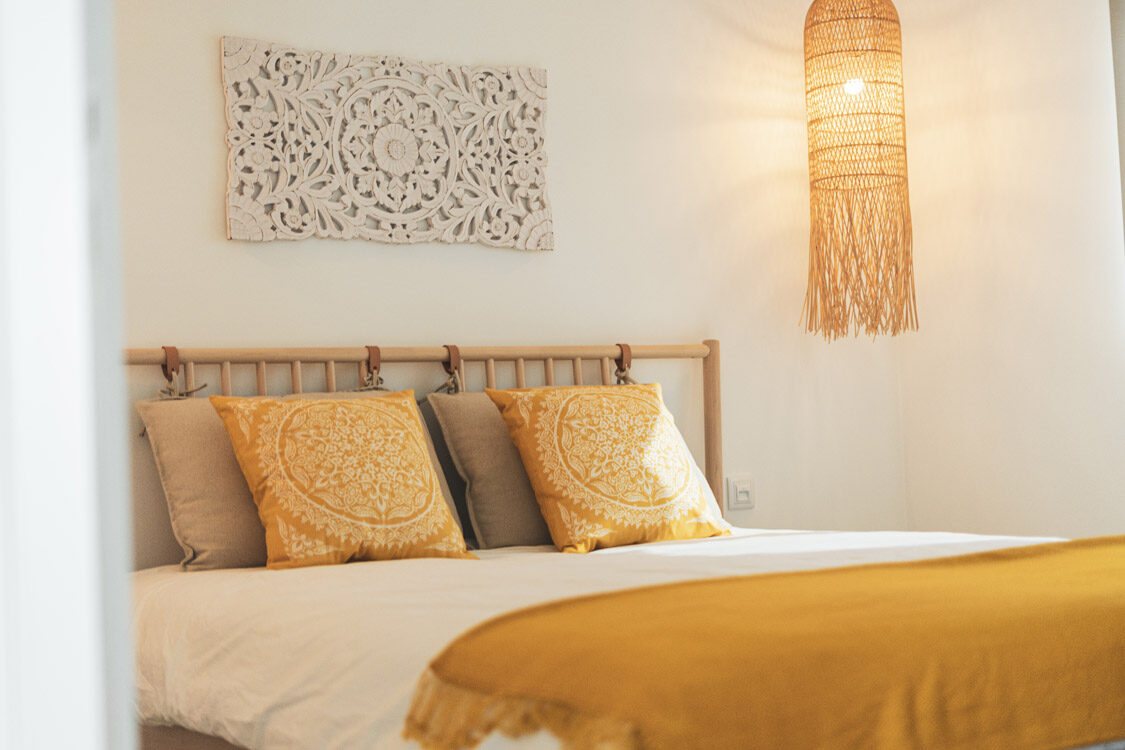 But respect for the environment does not stop there. Firstly, choosing modified wood, without the addition of chemicals, for all the construction of the infrastructure, allows for greater durability, stability, zero maintenance and a thermal behaviour that helps insulation, even in winter. This factor has also determined that the investment in the whole project has been reduced to around €500,000.

In addition to the class A energy certificate, the countertop and kitchen tops, for example, are made of compact minerals with resin. “Environmental concern is already part of the company. One of our mottos is to use recyclable materials whenever possible. We don’t use anything based on oil or plastic because we want it to be as natural as possible,” explains Sílvia Carvalho.

To complete the experience, even though the house is fully equipped, there are still additional services that can be rented apart, such as meal delivery, prepared by local restaurants, and laundry service. As the owner of the house owns a boat, Living Armona also facilitates transport from the quay of Olhão to the island and vice-versa. They can also arrange for trips for dolphin or bird watching and, for the sports aficionados, there are packs for diving, jet-skiing or wakeboarding. It should also be noted that the house itself has two electric scooters available, at no extra cost. 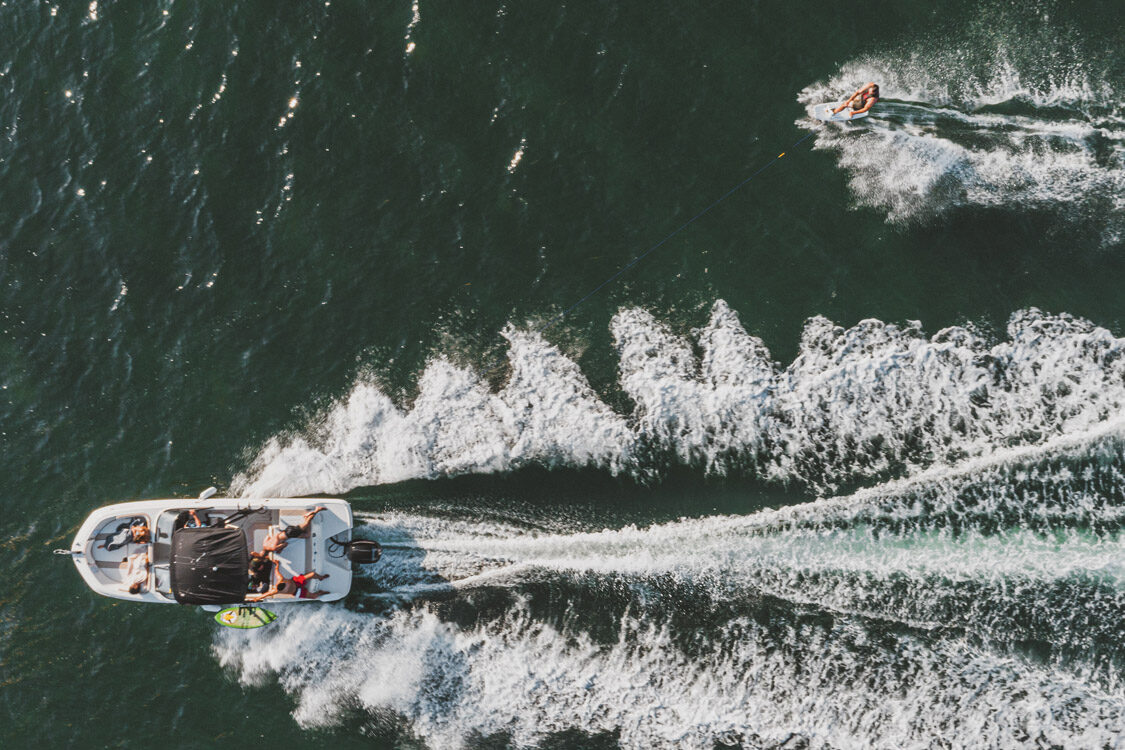 But how was it possible to create an infrastructure from scratch on an island in the middle of the Ria Formosa Natural Park, with so many conditions pertaining to construction and legalisation? “New constructions are forbidden. What we did was to acquire a pre-existent house, which did not meet the quality criteria required by the new owner.

The wooden infrastructure was built, meeting the licensing criteria. That pre-existing construction was demolished and we rebuilt the new structure from zero,” says Sílvia Carvalho. “We have no masonry; nothing there is in concrete, all interior and exterior walls are made of wood and plasterboard with ceramic coatings. Everything was in order.”

The real issues, in fact, occurred at the time of construction. “We were conditioned by the weather, the tides, the wind or the lack thereof. For example, all the flowers were transported in the ferryboats, but all the structures, coatings and crockery were transported in a cargo boat that we rented with a small crane on board, which brought everything to shore. Then everything was done by hand. It was a matter of time, tide and personnel management”, recalls Sílvia Carvalho.

It was also at that moment that the team became aware of the mutual help with the community of island residents. “They helped us whenever necessary in the transportation of materials from the beach to the house and from the house to the beach. There was always a very good and positive interaction; they accepted us and really welcomed us,” she adds.

The residence began operating on September 15 of last year and the response from the first clients was “very positive”, according to the architect. “We had about 150 emails a day. A lot of people were interested in seeing it and requesting information — Portuguese, foreigners and even Algarveans with some economic power.” Prices start at €500 per night, and guests can also book the lodge for long periods, for art residences, for example.

Living Armona is now preparing to create three more houses on that island. According to Sílvia Carvalho, the licenses have been with Olhão City Hall since the beginning of 2019. “We are talking about three first-line lots, with fabulous locations. Two are contiguous, where two houses will be built, but the third plot, which remains to be built, will be a different house. The space and the areas are bigger and just the patio has 500 square meters.” 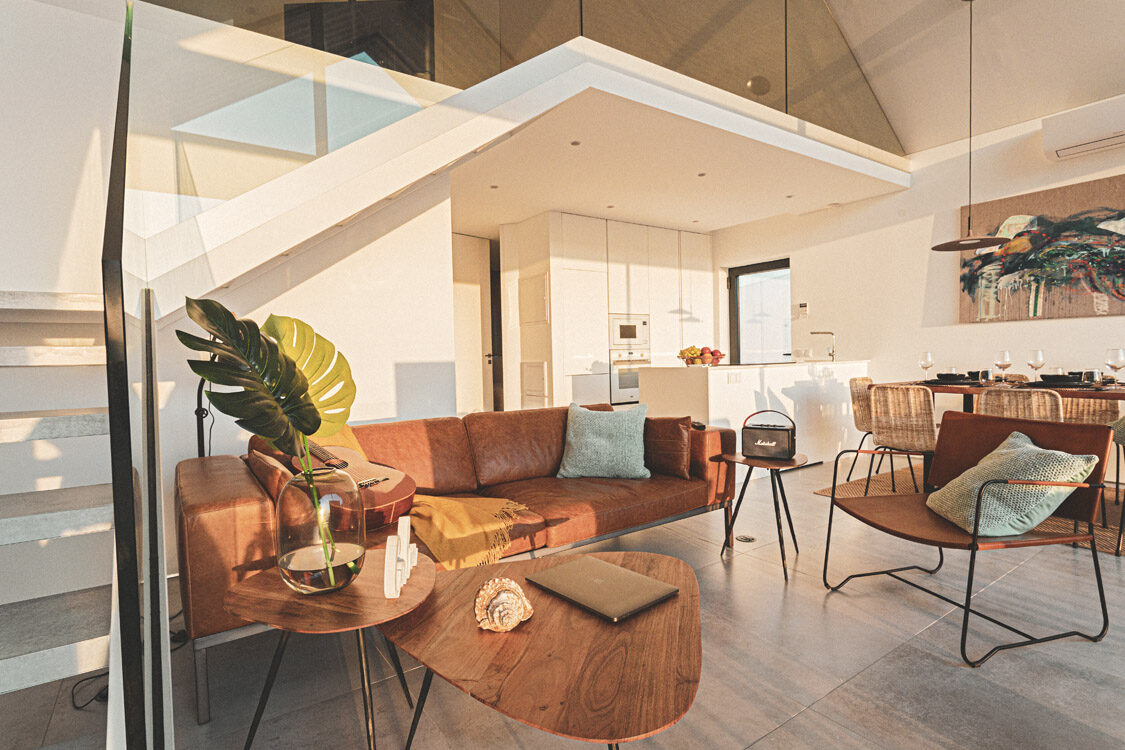 For those unfamiliar with Armona, Sílvia Carvalho throws down the challenge: “Come and be fascinated. It’s an amazing island, with fantastic cuisine, a wonderful sunset When I visited for the first time, I had a secret desire to have a home there as well. People fly for miles, travel to the other side of the world, when they don’t know these places are right on our doorstep. We have these islands so close with just as much if not more quality than other countries.”