Change Ahead: The wine industr..

Love is All You Need: Painter .. 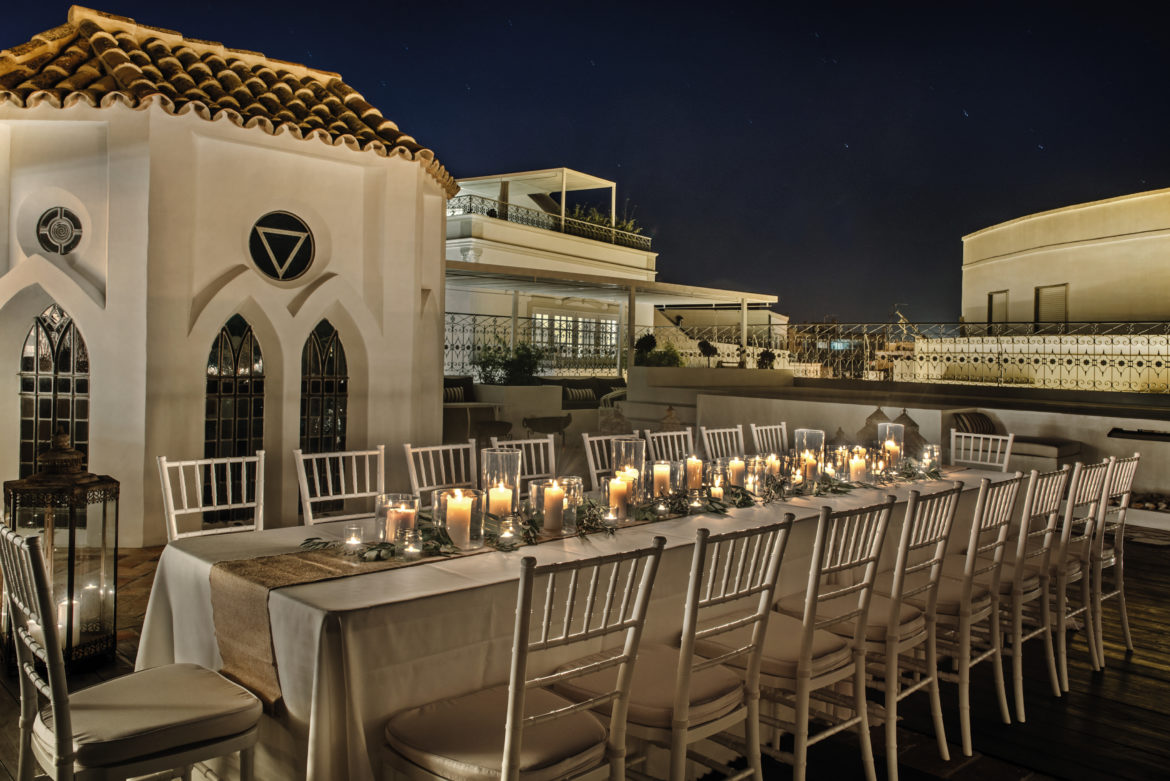 Casa Fuzetta, a historic house in the heart of Olhão, was restored by a lawyer couple from London. Open for two years, it is already one of the finest retreats in Europe

At the beginning of the 20th century, the winds of a new-born Republic were blowing strongly in Portugal, and the Freemasonry ideals characteristic of the time greatly influenced Carlos Fuzeta, a lawyer, diplomat and philanthropist born in Olhão in 1872, who garnered great national prestige in the defence of fishing and maritime activity. He was a local hero, whose house was a magnificent bourgeois building, just north of Bairro da Barreta. At the top he had built a Gothic-style tower with stained-glass windows and oculi — a symbol of the owner’s sombre and noble image.

You may wonder why we are telling you this story. Well, it was precisely this singular feature that enticed Tara and Jonathan Donovan, a couple from London, to buy the property and turn it into an exclusive accommodation unit. Up until around 2012, 51-year-old Tara was a lawyer in the entertainment industry.

“I worked for a client named Jamie Oliver for almost 15 years. I was responsible for all the media activity,” she recalls. “A friend of ours, who was a food journalist, wrote for Jamie’s magazine a few times and he used to come to Olhão a lot.”

The couple heard so much about the town that they decided to visit, although they were not planning on buying anything. It just so happened that, following the death of Carlos Fuzeta, in 1942, the house was divided into two separate buildings. One of them, whose masonry walls date back to the 16th century, “was a disgrace” and, as chance would have it, Tara and Jonathan went in for a look.

“It wasn’t anything special,” says Tara. However, when they looked through the gaps and went up the roof, they saw a massive patio on the house next door. Jonathan was wholly fascinated with the Gothic tower, which now stands over the main meditation room. “The truth is the house called to us. We felt its energy,” she explains. “This was in September 2012 and, by the end of December, we owned both houses.”

One belonged to the bank, so its acquisition was easy. The other however, belonged to a private owner. The building was then carefully restored over the course of three years, between 2014 and 2016. Tara, who is also a manager, designer and a businesswoman, did not reveal how much she invested between buying the property and restoring it. She says only that everything was planned with sustainability in mind.

“One of the first architects who came here, still young and perhaps a bit inexperienced, kept shaking his head. He did not believe it was possible.” Their goal was to create a balance between the legacy of the original architecture and a contemporary design. “Fortunately, we found someone with more experience and the team became quite involved.”

The result is a thoroughly planned unit, which even features a rooftop pool with views towards the Ria Formosa lagoon. But that is not all. On a typical day, guests can witness everyday life just as it still is in Olhão. For example, as the neighbours hang their clothes to dry in the sun, they let out a joyful, Algarvean “bom dia” (good morning).

It has been this way since May 7, 2017, when the house became a local accommodation (Alojamento Local) unit designed for large families, friends or groups seeking a more intimate, private and relaxed place to spend time together, for special occasions or retreats. Prices for 2019 start at €1,350 per night, and later increase to €2,750 a night during high season (July to August), with a minimum of five nights booked. Tara Donovan explains that these prices are four groups only and that it is possible to comfortably accommodate up to 24 people in the house’s 12 rooms.

“Most come for wellness, meditation, personal development and yoga retreats or for nutrition and food photography retreats in the Olhão markets. We always favour the spiritual side of the visit, but we can also organise retreats and corporate events,” she says. “We enjoy a community experience. There’s a magic that happens in a group dynamic,” Tara explains.

In January, they held an initiative titled “Heal the Healers”, which brought together professionals such as psychotherapists and pampered them a bit. “It was very successful,” says Tara. And, of course, the Ria Formosa and Culatra and Armona islands are also great attractions for the guests.

At the time of press in June, the couple already had 140 nights reserved for 2019 and only seven of those were booked through third parties. “Everything is direct. People follow our Instagram, but they come to us by word of mouth. We have been lucky with the press, but I think that only provides assurance to those who look for us. Americans in particular seem to enjoy travelling in groups,” she explains.

Life in the Algarve has its challenges, and Tara has a critical view.

“Enough thinking the high season is from June to September. For me, the summer months are the hardest to sell. I have been fully booked since the beginning of March until the second week of July and from September 4 to November 20. The Portuguese don’t understand how truly horrible the weather is in Northern Europe. And Faro is only two hours away. In December, while it snows, rains and temperatures are below zero, you can come to the Algarve and find blue skies and 20oC. That’s our best summer day,” she jokes. “So I don’t understand why hotels or the Portuguese tourism authorities still haven’t realised that the Algarve is an year-round destination. And there is another issue — I have a commitment; I employ people. It breaks my heart that people are let go in the winter because there is no more work. How can you build a loyal staff if they are treated as a commodity? It’s not right. There is so much to offer here,” she states.

For more information about the location, visit www.casafuzetta.com