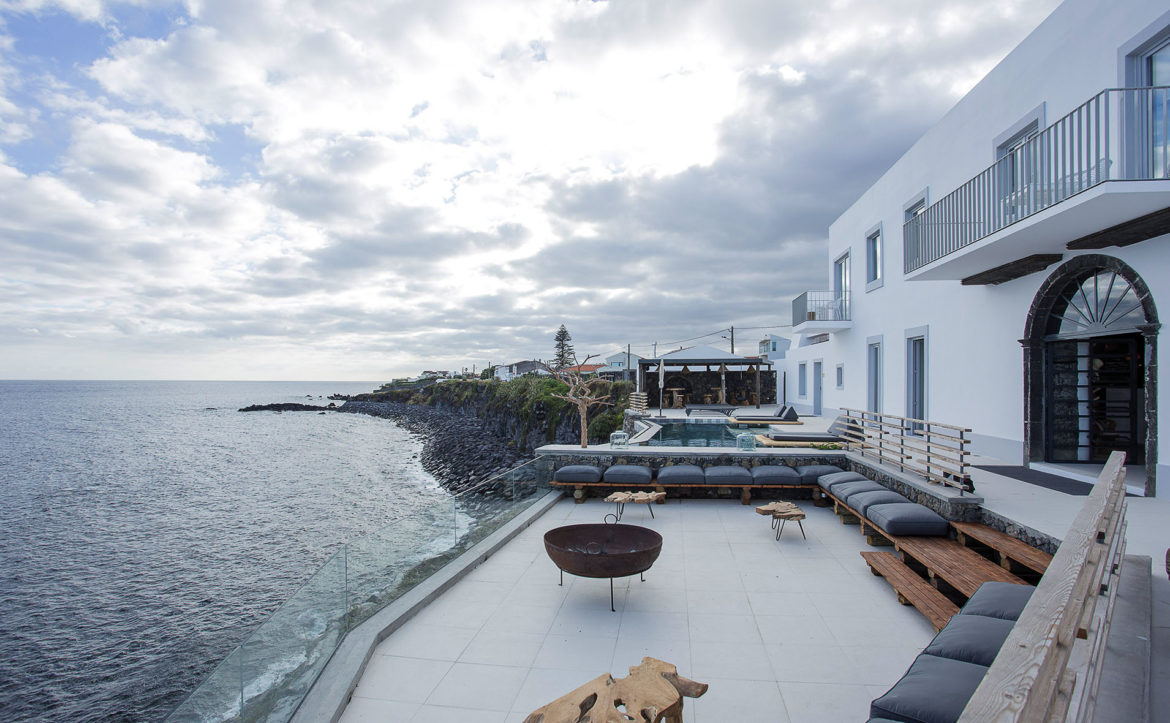 Perched on volcanic rocks in the middle of the Atlantic Ocean, White Exclusive Suites & Villas is the new jewel of the Azores

Black volcanic rocks plunging into a deep blue sea contrast with dazzling whitewashed walls. A ship cruises along the distant horizon and all one can hear is the sound of the waves crashing below and coastal birds squawking as the sun sets. Far from the madding summer crowds of southern Europe, we found the perfect spot for a discreet and luxurious escapade, right in the middle of the Atlantic Ocean.

To be honest, one could think we were in Greece. The bare rocks, the simplicity and brightness of the décor and the tranquil atmosphere of White Exclusive Suites & Villas are reminiscing of quaint fishing villages on Cycladic hills, with little white houses overlooking an azure sea.

Sitting in a bay of volcanic rocks, less than a stone’s throw from the sea, this small luxury hotel, with just nine rooms and a private villa, is the creation of João and Catarina Reis, a young couple who discovered an old house on the south coast of their beloved island of São Miguel and decided to transform it. Passionate travellers with a taste for luxurious getaways, they were inspired by their holidays in the beautiful island of Santorini, in the Sea of Crete, where the lifestyle is simple yet refined.

Easily accessible – just a 10-minute drive from Ponta Delgada Airport – White is a little coastal haven. The pure and soothing aura of the building has an immediate impact as we arrive: as soon as we walk through the main door, we feel a sense of peace and tranquillity. The view onto the ocean alone could be sufficient, but it is the charming atmosphere which instantly transforms us: natural light, plants cascading on the entrance walls, minimalistic décor and the rustic charm of a wooden ceiling fan and a few straw hats hanging on a wooden coat rack, which combine perfectly with long benches covered in extra-large grey cushions. It is the perfect setting to disconnect and relax.

Once the check-in is complete, Catarina invites us to cool off with a pineapple cocktail on the covered terrace. White, wooden shutters stand ajar, revealing the vast blue ocean. As the clouds subside and the terrace heats up, you are tempted to dive into the turquoise blue infinity pool, guarded by a bare tree trunk, a couple of large candles and small piles of white pebbles. The scene is set, Santorini-style.

Every detail has clearly been carefully thought out to recreate the warmth of a Mediterranean holiday: wooden sun beds with large, grey cushions ‘hover’ over the pool, reclaimed wooden armchairs from Bali invite you to sit on the terrace, and a large fire pit, surrounded by large sofas, is lit every night just in time to sip a glass of Vulcânico rosé before dinner.

Inside, each room is different. The decoration remains sober and the colours neutral. White walls offset the dark volcanic stone of the original house, while a mirror made of reclaimed wood and a piece of macramé hanging from the ceiling contrast with the large flat-screen TV. The polished cement bathrooms feature large walk-in showers, fluffy towels and deliciously fragrant Susanne Kaufmann products. For those looking for absolute peace and tranquillity, the hotel also offers a small, individual villa with its own seaside Jacuzzi.

The hotel’s restaurant Cardume (school of fish, in Portuguese) was named after a school of metal fish that João brought back from one of his many trips to Asia. The decoration follows the hotel’s main simplistic theme, the materials are all natural and basic: wooden tables, metal and leather chairs and lampshades made out of Asian fishing baskets. The menu features several fusion dishes made with ingredients from the Azorean archipelago, with an emphasis on fish. However, Catarina and João have another great gourmet option, located on the north coast of the island (just 15 minutes away): the restaurant of their other hotel, the Santa Bárbara Eco-Beach Resort, which boasts a fabulous beachside restaurant serving sushi and sashimi made with local fish, a deliciously fresh seared tuna and a melt-in-mouth beef loin.

You will feel tempted to spend the whole weekend sipping rosé by the pool, but it would be a shame to leave the island without seeing a few of its natural wonders. So, after a hearty breakfast, which included the traditional bolo lêvedo (Azorean flat bread) with São Jorge island cheese, head out for a day of adventures with the hotel’s guest relations manager, João Almeida. Born and bred on the island, he knows São Miguel and its volcanoes like the back of his hand. First, head west, to visit the Sete Cidades lagoon, the largest freshwater reservoir of the archipelago. Then you get to taste passion fruit liqueur and homemade chocolate in Ribeira Grande and stop for a cup of tea at Gorreana tea plantation on the north coast.

Have lunch at the Furnas and a swim in the ferruginous water pools at the Terra Nostra park (don’t forget to bring an old bathing costume, as the rusty waters tend to stain fabrics) and, to finish the day on a sweet note, visit one of the famous local pineapple plantations.

Satisfied with your tour of this lush green island, you can now head back to the hotel and fall asleep by the pool, lulled by the soothing sound of the waves of the Atlantic Ocean. 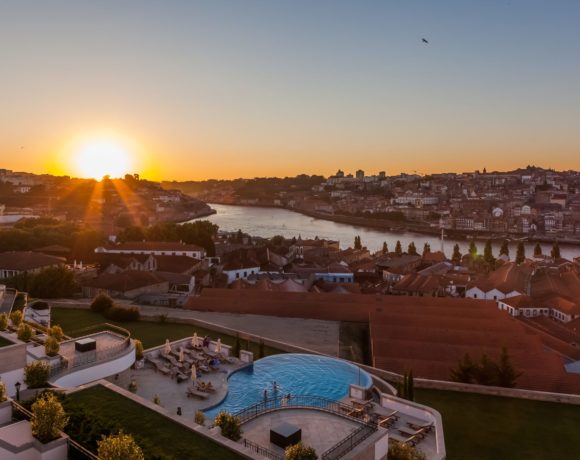