Up, Up and Away: Exploring the.. 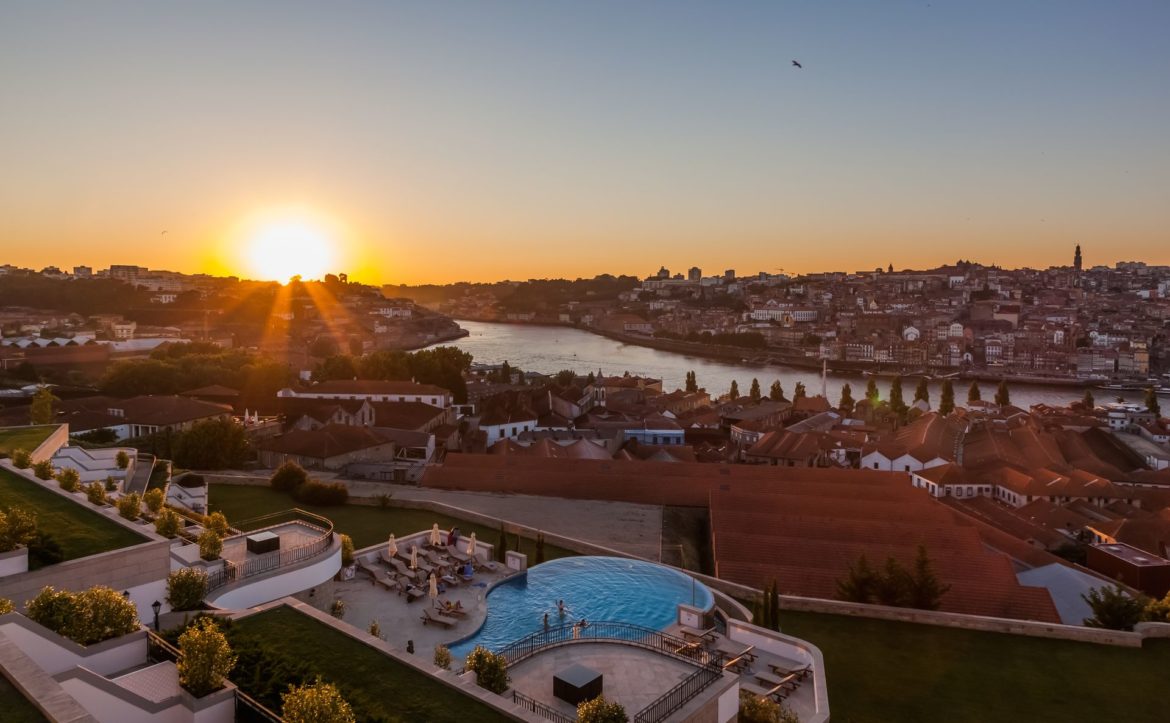 The city of Porto, at the mouth of the Douro River, is one of the most romantic European cities imaginable. Twice distinguished as Best European Destination, Porto has several attraction points listed as UNESCO World Heritage Sites and is served by an excellent international airport, Francisco Sá Carneiro, with an increasing number of direct flights to the United States. The city is not only home to the king of fortified wines, Port, but equally the gateway to the spectacular Douro wine region, now recognised as one of the world’s greatest.

The splendid jewel in Porto’s five-star crown, The Yeatman, cascades in a series of terraces down the hillside in Vila Nova de Gaia, the district where the great Port wine lodges are located. Opened in 2008 and named after a prominent British Port merchant family, the hotel is one of Europe’s leading wine hotels and commands a gaspinducing view across the Douro River to Porto. With its 25,000-bottle wine cellar, The Yeatman can claim the world’s most extensive collection of Portuguese table wines and Ports, curated by wine director Beatriz Machado, who trained at the University of California, Davis, where she worked alongside the eminent Roger Boulton, a respected American writer and professor.

Each of The Yeatman’s spacious rooms is partnered with a Portuguese wine estate, offering a distinctive taste. In one suite, guests can retire to bed in a giant Port wine vat. Visitors should not miss the opportunity to first dine at the restaurant with two Michelin stars, where chef Ricardo Costa and his team delight the palate with traditional Portuguese flavours based on local produce and interpreted with contemporary creativity.

After dinner, guests can sample one of the many vintage Ports in the well-stocked Dick’s Bar, while they gaze out at the lights of Porto and, if by chance it is a Thursday, listen to heart-wrenching strains of fado. The Yeatman also organises Wine Dinners every Thursday (reservations only), and in the summer holds sunset wine parties on the terrace that have become such a part of the city’s legend that they are booked out several weeks ahead. The next morning, guests in need of a little pampering before catching the Douro River Taxi across to the city can take a dip in the infinity pool and head to The Yeatman’s Caudalie vinotherapy spa to sample one of a selection of dreamy massages.

Named after Prince Henry the Navigator, who launched the Portuguese Age of Exploration, the Infante Sagres is a distinguished Porto institution, frequented since 1951 by many of the city’s most discerning visitors. The hotel has now been entirely restored to its original glory by new owners, The Fladgate Partnership. Marketing director, Richard Bow den, described how teams of master craftsmen stripped off layers of dark paint, revealing and restoring the hotel’s elaborate original ironwork, carved wood and stained glass, preserving the Infante Sagres’ flamboyance, while adding contemporary luxury.

Vogue Café is a recent, innovative addition, reflecting Porto today in the international limelight. The bar opens onto the city, providing a touch of understated sophistication that would undoubtedly have been appreciated by the hotel’s original clientele. The Infante Sagres is just around the corner from everything there is to visit in Porto, from baroque churches to traditional barbershops.

The city’s great 20th-century commercial centrepiece is called Avenida dos Aliados, an elegant square faced by offices, hotels and cafés, which mounts the hill to culminate at City Hall. One of these splendid buildings is the recently re-opened Le Monumental Palace, an Art Deco treasure that dates from 1923. The rooms have a 1930s-inspired décor and lovely bathrooms.

Michelin-star chef Julien Montbabut presides over the Monumental Café, an elegant Parisian-style brasserie with an international wine list. On a recent lunchtime visit, Essential enjoyed a croaker cooked to perfection and ray, paired with a wonderful fruity Covela Escolha 2015, a blend of Chardonnay and the Portuguese grape variety Avesso. The desserts are some of the best in town, including a to-die-for meringue lemon tart.

On the eastern side of the Avenida dos Aliados, in Porto’s theatre district, the Pestana Group has renovated another architectural landmark, now re-baptised Pestana Porto — A Brasileira. This renovation incorporates the hotel’s original early 20th-century features as well as paying attention to important contemporary details such as soundproofing. The hotel rises above the celebrated A Brasileira Café, renowned for the slogan “the best coffee comes from A Brasileira”, and for decades the meeting place of the debonair.

The hotel boasts a French patio with a vertical garden to relax or plan the next day in the city, and rooms with spice themes, such as cinnamon, chocolate or pink pepper, associated with the Portuguese maritime explorations of the 15th and 16th centuries — a delightful idea that turns any stay into an olfactory experience.