Minerality: Fact or fiction in.. 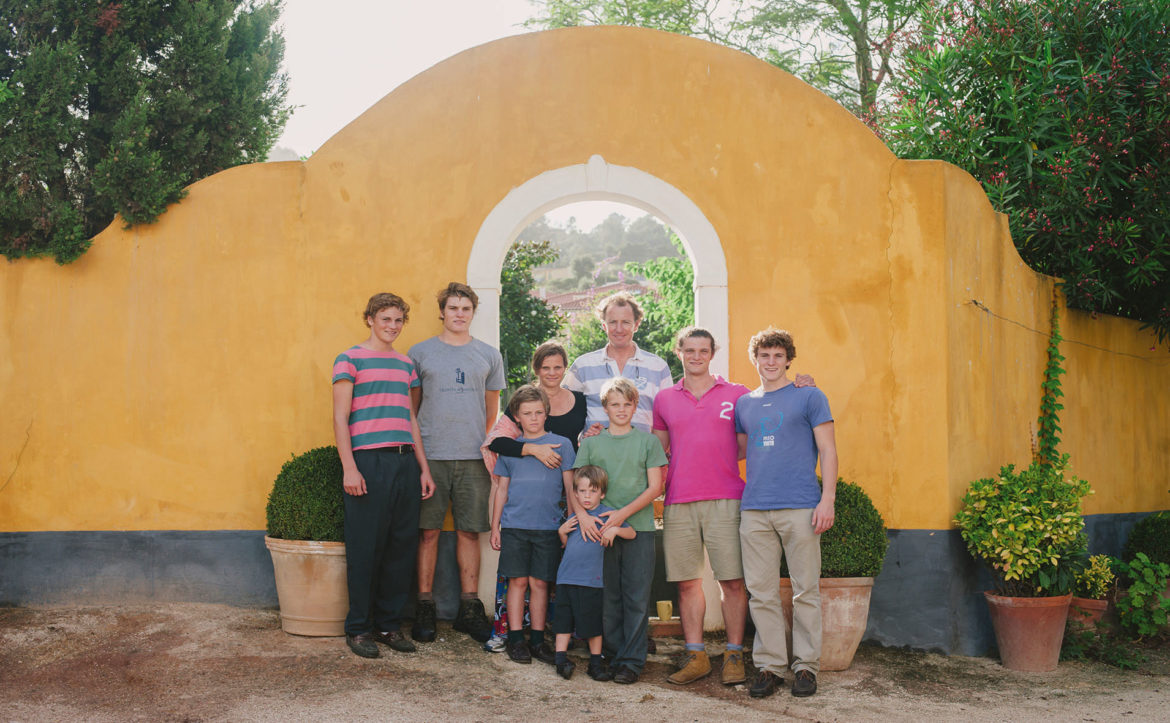 At Quinta de Sant’Ana, James Frost won’t rest until “the vineyard is looked after, his guests are happy and the children are tucked up in bed!”

Imagine walking onto the set of The Sound of Music, only in Portugal. Beautiful countryside, hills alive with vines, a family home with seven handsome young boys and a hospitality business second to none. This is Quinta de Sant’Ana.

I’d heard about this enchanting place through several friends who had been to its harvest fair, held every year on the last Sunday of October. I was told about the family’s superb hospitality, the idyllic location and their reputation for throwing a good party. I had to see it for myself. Just half an hour north of Lisbon, close to Mafra, the 40-hectare property is set on the slopes of a green valley.

Last January, as I made my way down a narrow winding road, I could see from afar a bright yellow chapel tower and a tall palm-tree, emblems of the Quinta. This is where James Frost and his German wife, Ann von Fürstenberg, built their business, a family home shared with those who love nature, wine and great hospitality.

James, an Englishman originally from Dorset, showed me around on a cold, sunny winter’s afternoon as he told me how his parents-in-law had bought the property in 1969 and lived here until 1974, when they moved back to Germany because of the Portuguese revolution. He met Ann in Germany, when he was in the army, and she soon convinced him to move to Portugal in 1992 and take over her family’s estate. At first they concentrated on tourism and events, the winery would come later. They converted several cottages to host guests and ran a B&B in the main house until the family grew too large. The old mill and farm shop were converted into a banqueting hall, which now hosts weddings and parties for up to 200 guests.

But what really interested me was the winery. The property already produced wine when James and Ann first arrived but the quality was very poor. Being a countryman by nature, James rolled up his sleeves, replanted vines and invested in new technology to make “proper” wine. The big change happened in 2004, when he started working with young winemaker António Maçanita, who he was introduced to by his late friend and viticulturist David Booth. They kept planting vines and today have a total of 11.5 hectares, and will plant more.

They now produce 50,000 bottles per year, distributed nationally through the Fladgate Partnership and internationally through independent wine merchants. Their aim is quality, not quantity, as well as having interesting varieties. “We have a mixture of Portuguese and foreign varietals. The whites are Riesling, in the deepest soils of the Quinta, Sauvignon Blanc at the base of the vineyard and whites on the other side of the hill, Fernão Pires, Verdelho, Alvarinho and Arinto. The whites are planted on the really deep soils, where they have a lot of freshness, and the reds on the upper slopes, where they have shallower soils, more sun and more stress, it all helps with the ripening of the grapes,” explains James.

Being so close to the Atlantic coast, just 12km away, the location is perfect for wine making. “We’re actually in a quite cool area of Portugal, close to the sea, up in the hills, we have cool nights in the summer and the mornings are quite misty. Then we have sun and heat in the afternoon. It’s ideal.” James makes the most of this location to give each grape variety the best conditions to grow and show their full potential, while producing organic wine. “There are no herbicides, no pesticides, and it works. We’ve almost finished the conversion period. At the end of the harvest this year we’ll have organic grapes.”

They currently produce six white wines, all mono-varietals: Fernão Pires, Alvarinho, aged in oak barrels for 10 months, Riesling, Verdelho, Sauvignon Blanc and an Arinto, which will soon be launched as a Reserva. The rosé is a blend of Touriga Nacional, Aragonez, Merlot and Pinot Noir. As for the reds, they make a concentrated yet light Pinot Noir and a “Tinto”, a blend of Touriga Nacional, Aragonez and Merlot.

Although the Pinot Noir has proved to be very popular, they will aim to work with more Portuguese grapes in the future. For instance, instead of Pinot Noir, they will use Ramisco, a grape variety from the Colares area close to Sintra, which they are already experimenting with and will soon be bottling. They occasionally produce Touriga Nacional and Merlot mono-varietals and have two very special blends – Homenagem Baron von Fürstenberg, a “noble, elegant and complex” wine, a tribute to James’s father in law, and the red Reserva, a ruby coloured wine with red fruit aromas, a touch of menthol and spice.

Although the Frost’s seven sons aren’t yet involved in the family business (most of them still being too young), James hopes that one day they will be enticed by winemaking. The thought of the Frost legacy and their way of life lasting for many generations to come is music to my ears.