A Great Value Find from Bairra..

The Surprising Wines of Cyprus

The Surprising Wines of Cyprus 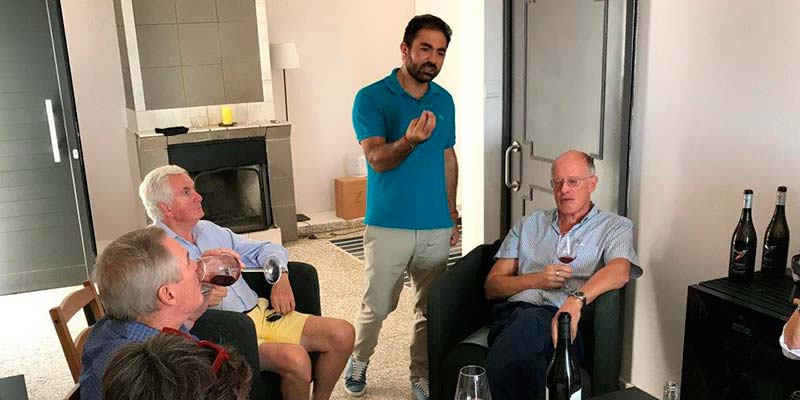 What is your idea of wine from Cyprus? Emva Cream sherry, maybe? Recently, a group of 14 Algarve Wine Society members decided to put aside their preconceptions and explore the current Cyprus wine scene.

Organiser Nick Sykes has had a 20-year plus association with this beautiful island and is enthusiastic about recent developments which have seen the production and quality of Cyprus wines improve beyond belief.

For centuries, many Greek Cypriot families have made wine for themselves and their friends, but now the latest generation are travelling abroad to expand their winemaking education and returning with their newly-gained knowledge to revitalise the industry.

The five-day trip started in the scenic village of Lysos, located in the hills behind Paphos. Accommodation was at the family-run Paradisos Hills hotel, a romantic spot overlooking the distant sea. From here the group visited three wineries of the Paphos district, all family-run and part of the “new wave” of boutique producers who have been working to banish those bad memories of an earlier era when bulk wine was made in Cyprus by co-operatives using grapes in poor condition.

After two nights in Lysos, the group moved up into the Troodos mountains and the village of Kakopetria, staying three nights in the Mill Hotel, famous for its tasty trout dishes. From this base, the group made forays to two or three wineries each day, passing through some stunning mountain scenery and taking in some local culture in the form of the beautiful fresco-adorned church of Agios Nikolaos tis Stegis, a UNESCO World Heritage site.

In total, 12 wineries were visited, from tiny Ekfraseis where Christos Vassiliades operates from his village house, to the most opulent Oenou Yi, owned by a Nicosian lawyer and more reminiscent of a splendid five-star hotel than a winery.

A visit to Cyprus would be incomplete without tasting the oldest named wine in the world, in the form of Commandaria, reputedly served at the wedding of Richard the Lionheart to Berengaria, which took place in Limassol in the 12th century.

A sweet wine reminiscent of a Portuguese Moscatel, Commandaria is produced late in the season from sun-dried grapes and is sometimes fortified. Rather more of an acquired taste is Zivania, the local fire-water, but some members of the group appreciated its finer points!

So, if you find yourself drinking wine from a Cyprus boutique winery and enjoying it, don’t be surprised!