Located in the Algarve, Portugal’s largest natural reef is surrounded by insurmountable beauty and is constantly subject of national and international scientific investigations

Near Armação de Pêra, four miles off the coast, with depths between 12 and 22 meters, you will find the largest natural reef in Portugal. The consolidated structure stretches from northwest to southeast over seven nautical miles from the Alfanzina Light­house, near Carvoeiro to the edge of Galé, in Albufeira. Around 30,000 years ago, when the sea level rose about 20 metres, it covered areas of coastline that had been uncovered until then. According to the most likely theory, an ancient coastline eventually fossilised, creating the natural reef. Today, due to its geographic location, it is suitable for scuba diving all year round and is recognised as one of the top diving locations in the region, leading to scientific studies with worldwide impact. 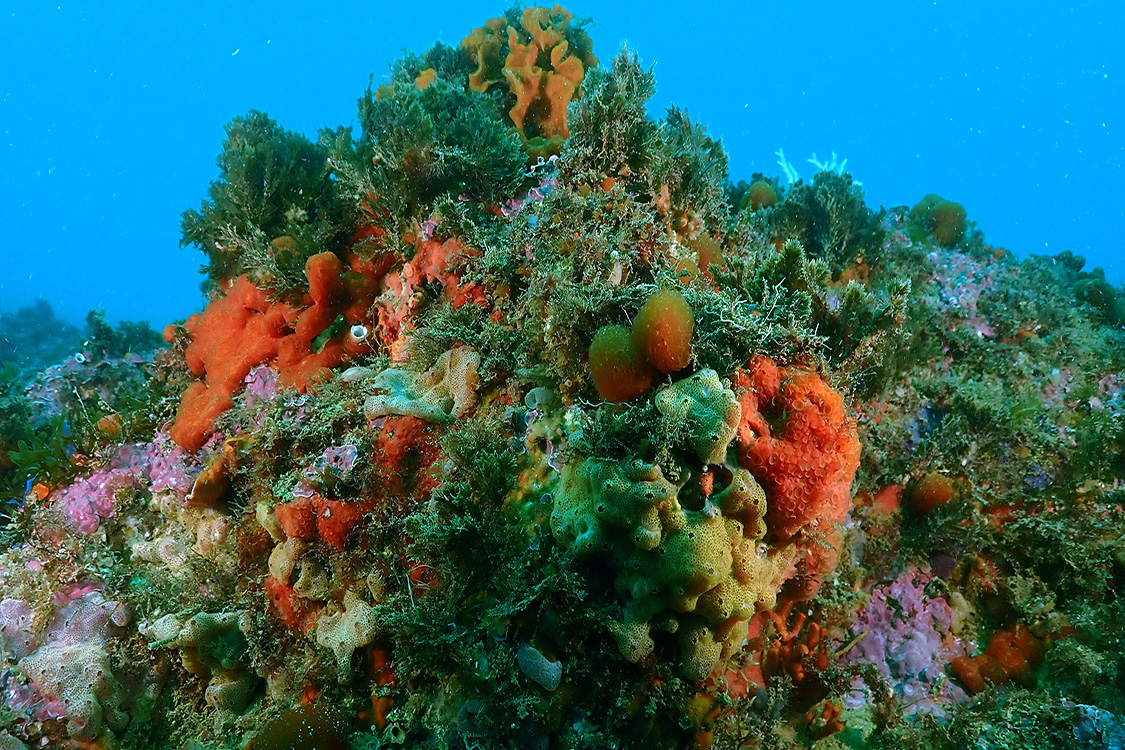 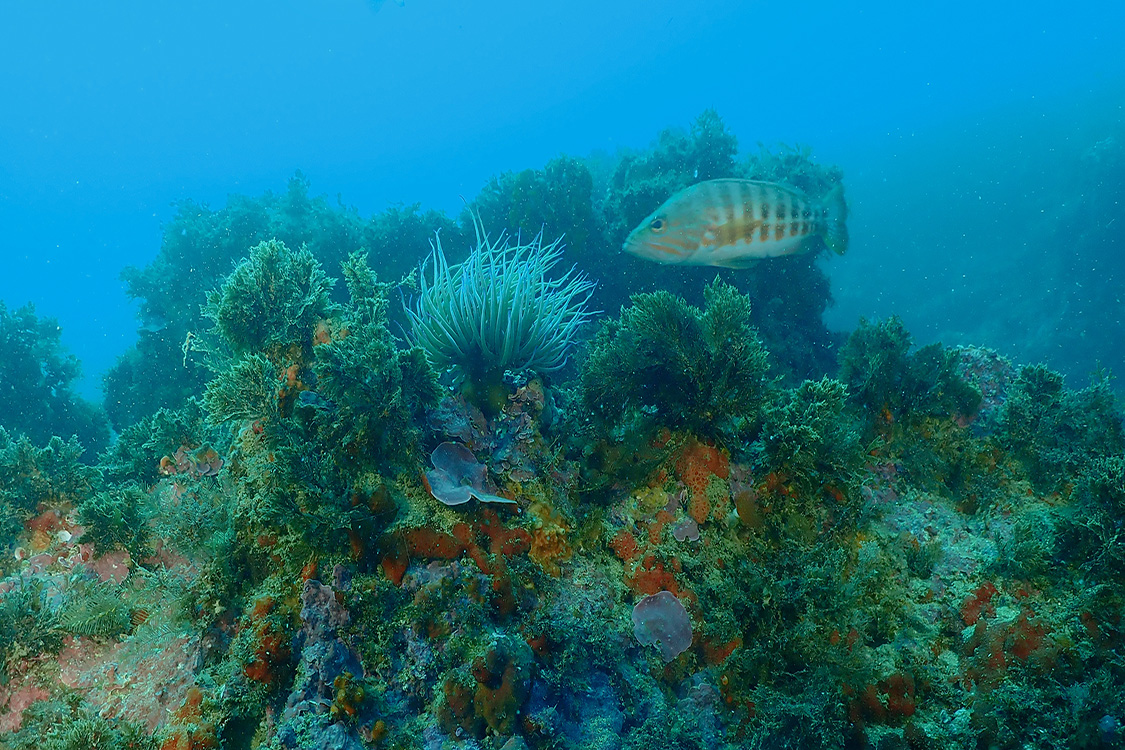 Since 1997, Divespot has helped national and international divers to discover the fauna and flora of that area. Miguel Rodrigues, the company director and a diver with more than 2,500 hours under the sea, has been all over the world but this is still, unsurprisingly, his favourite playground, right in his backyard: “This area has the greatest biodiversity in the Algarve, with an extraordinary life competition. There isn’t an inch of stone that hasn’t been completely colonised by algae, soft corals, sponges and a wealth of life. The three existing types of habitat there; reefs, maërl fields and sandbanks, together with the whole landscape, make the bay of Armação de Pêra a world of wonder. It has the perfect oceanographic and biological conditions. It’s the Bay of Dreams,” he states. 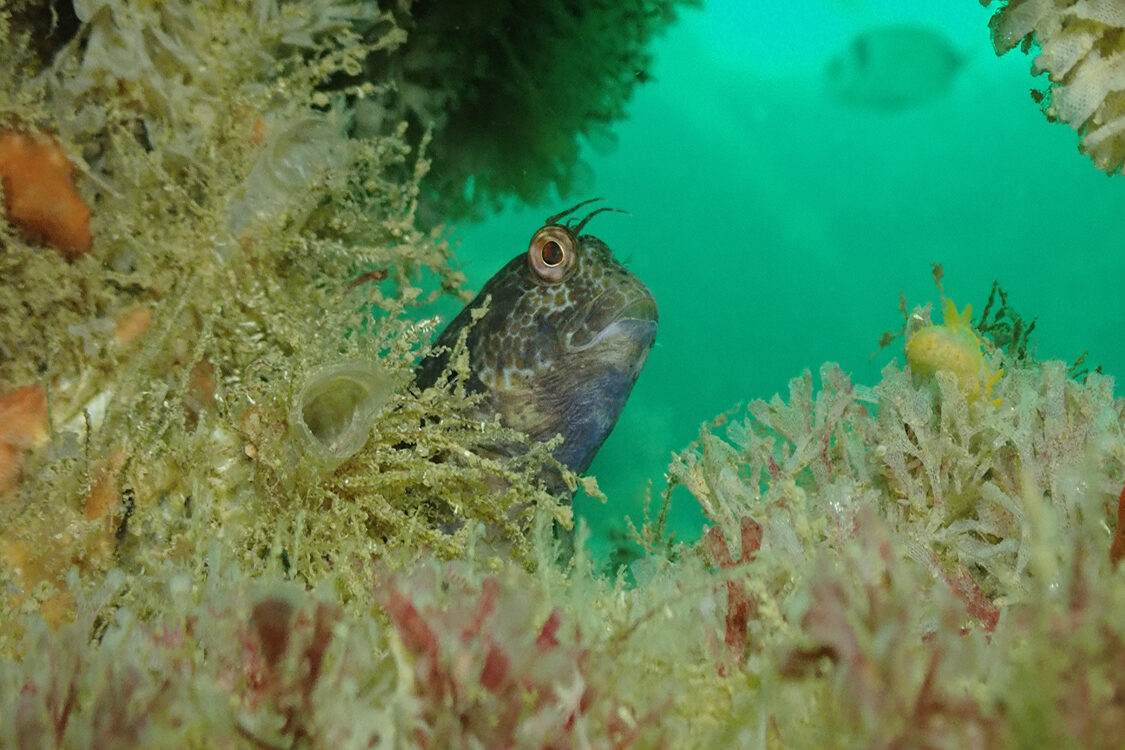 Over the last 15 years, all these peculiarities have brought to the Algarve several national and international scientists, who, in partnership with Divespot, have managed to identify 15 sites with unique characteristics. Across numerous studies, they have identified over 800 different species, among 116 fish, 649 invertebrates and 50 algae, 11 of which are completely new to Portugal, the Iberian Peninsula and even to science. One such example was the clustering of maërl, a limestone seaweed abundant in Armação de Pêra, which lives loose at the bottom of the sea and serves as habitat for several fish, crustaceans and molluscs. “This was the latest seaweed we discovered thanks to a joint operation with a research group from CCMAR – Centre of Marine Sciences of the University of the Algarve and the University of A Coruña. It was named Phymatolithon lusitanicum,” Miguel explains. 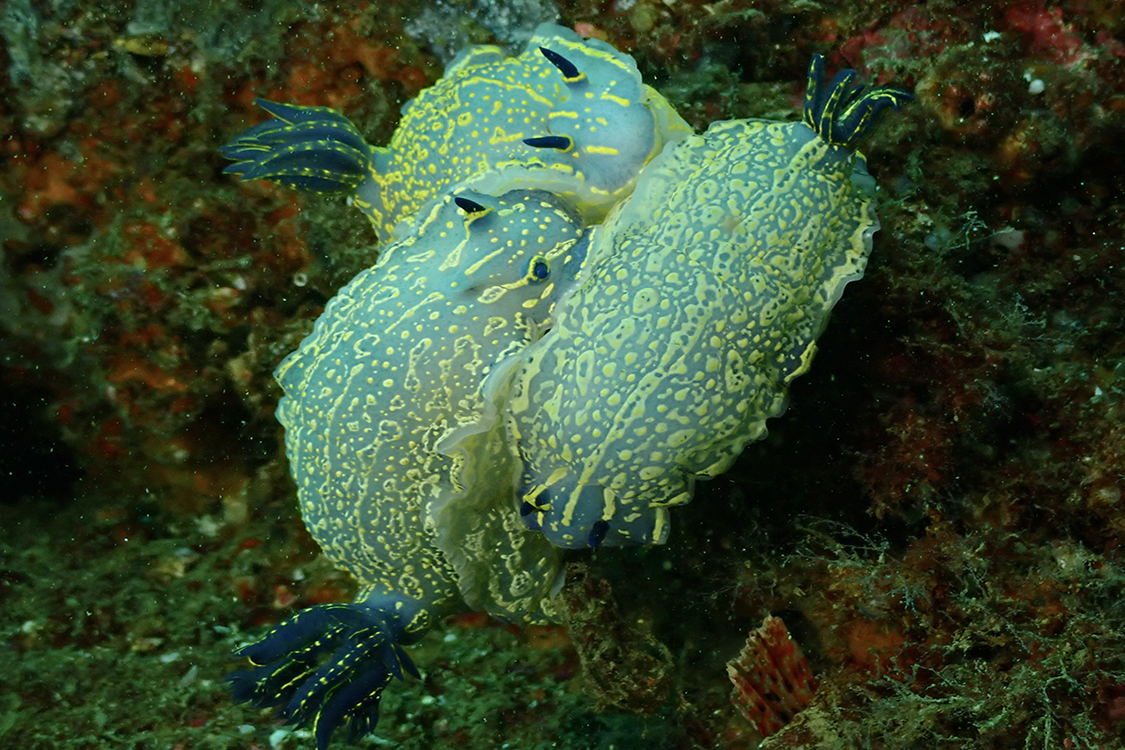 The site has such scientific value that “there are species that, so far, are only known to live here. They may even exist elsewhere, but they are not yet identified”, adds the diver. Besides, the area surrounding the reef is stunning on its own, with white sandy beaches, wild dunes, rocky coasts and sea caves. However, over the years there have been significant changes that cannot be ignored by those who know this zone well. “There are fewer fish, more rubbish and a greater number of invasive species. For example, we don’t see the Atlantic goliath grouper as often and we have been reintroducing it through stocking programmes,” he says.

With the emerging emphasis on protecting fauna and flora, Miguel Rodrigues reveals they have plans to do just that. “Currently, we have applied to create a Protected Marine Area of Community Interest, so that the area is better monitored and supervised. I believe it has to be protected and preserved so that we may enjoy it in full,” he states. “There are a lot of families depending on this bay and it’s important that we can preserve it for thousands of years to come. It just makes sense and it would be great to study the quality of the water, the fish, to analyse what is improving and what is worsening to ensure that the reef is in good condition for everyone to enjoy it.” 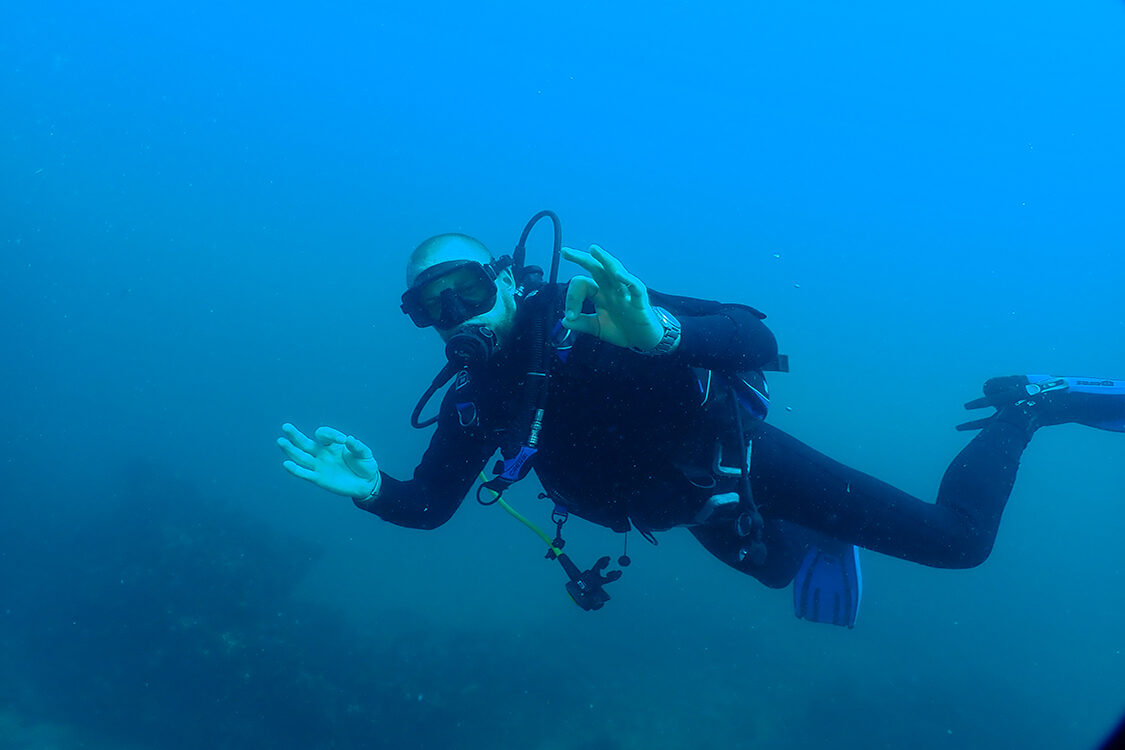 Divers looking to discover the reef can schedule a visit with Divespot. Departure is at 9am and there are two dives, each one taking between 45 minutes to one hour. The locations are chosen according to the diver’s experience and what they want to visit. They provide all the equipment, dive guide, insurance, skipper and the boat trip, which finishes at around 1pm. The all-inclusive experience costs €100 or €60 euros for those who bring their own equipment. The company also provides a diving baptism, which consists of a theoretical lesson, a pool lesson and a lesson in the sea with a dive five to seven metres deep. Costing €120, the client is also registered in a worldwide database to certify they have done their first diving experience. 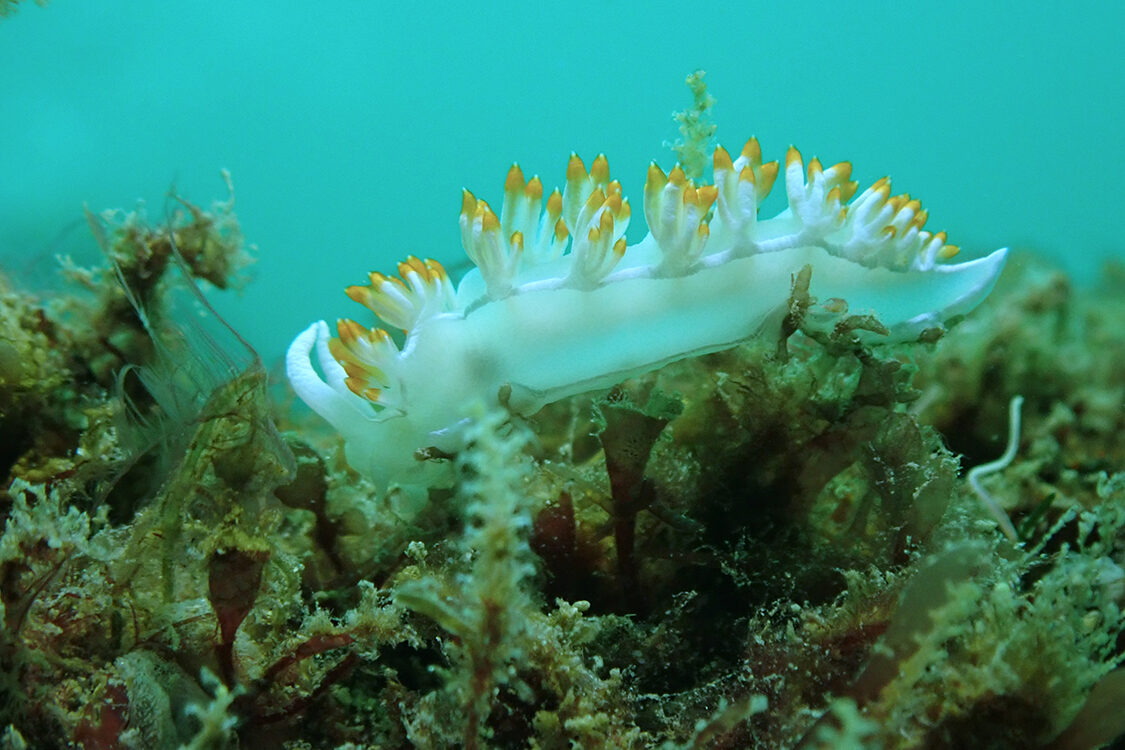 For those wishing to take the full course, prices start at €350 and include all the theory in a worldwide online platform with tests, pool class, six dives in the sea with different depths and a certification to dive anywhere in the world. It takes four days. Finally, if you want to take a specialty course, such as night diving or deep diving, prices vary between €200 and €400.

To pique your curiosity, Miguel Rodrigues highlights his favourite species and an ex-libris in Armação de Pêra, the nudibranchs: “Photographers come from all over the world to see them. They are fascinating, small, with beautiful colours and they are a staple of this reef.”