Born in St Asaph, North Wales, Mark Evans grew up on a rural farm. Aged just 7, his grandfather gave him a small pocketknife, which he used to carve images into trees and wood bark. This simple gift would prove to be an artistic catalyst. A childhood obsession with carving developed years later into a distinctive and unique technique. 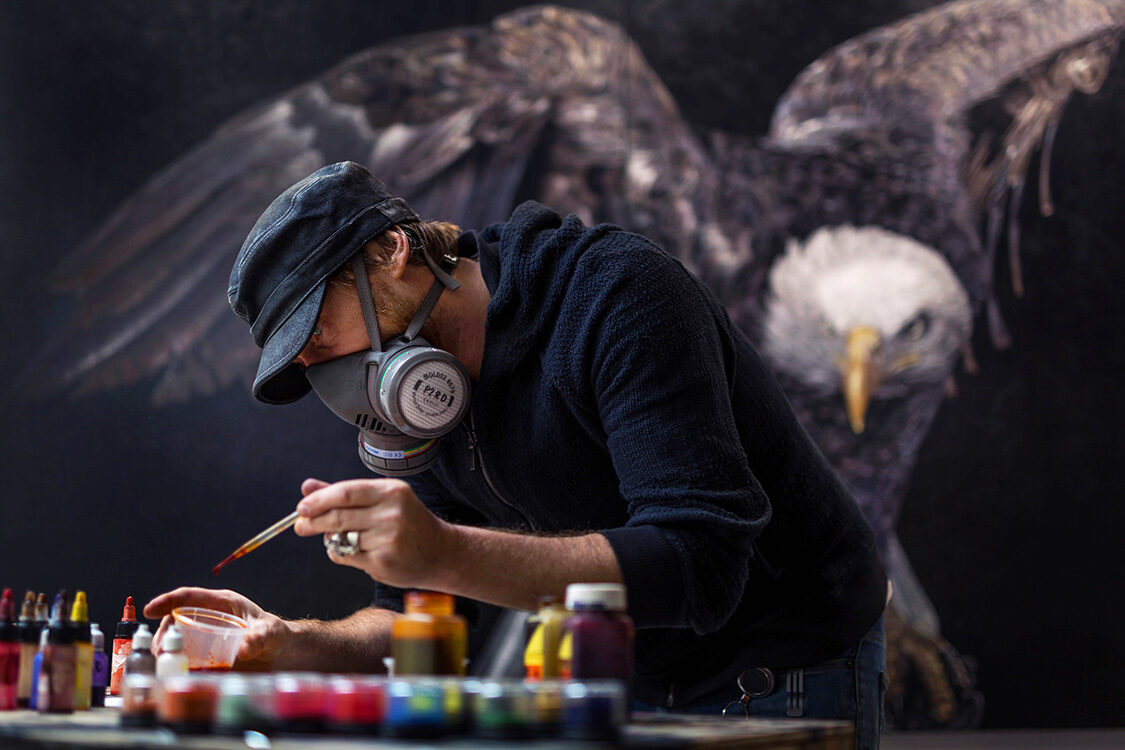 In 1995, Evans left the farm and moved to London to study Fine Art at Middlesex University and worked in traditional mediums, such as charcoal, oil, and acrylics, yet he felt something was missing. The strokes and the marks were all on the surface that could be changed and manipulated; there was no permanence to the process. In 2000, by chance, he was trying to clean a dry patch of blood off a new leather jacket, and he accidentally scratched the sleeve. The small incision revealed a soft-textured whiteness.

The effect was startling, the contrast between the dark, tanned hide and the cut pointed the way forward. “It was as if an explosion went off in my mind, I saw a world of possibilities,” Evans states. “I then spent the next few years focused on developing this technique at my studio. I was living as part-artist and part-alchemist trying to perfect the process which I’d accidentally discovered.” 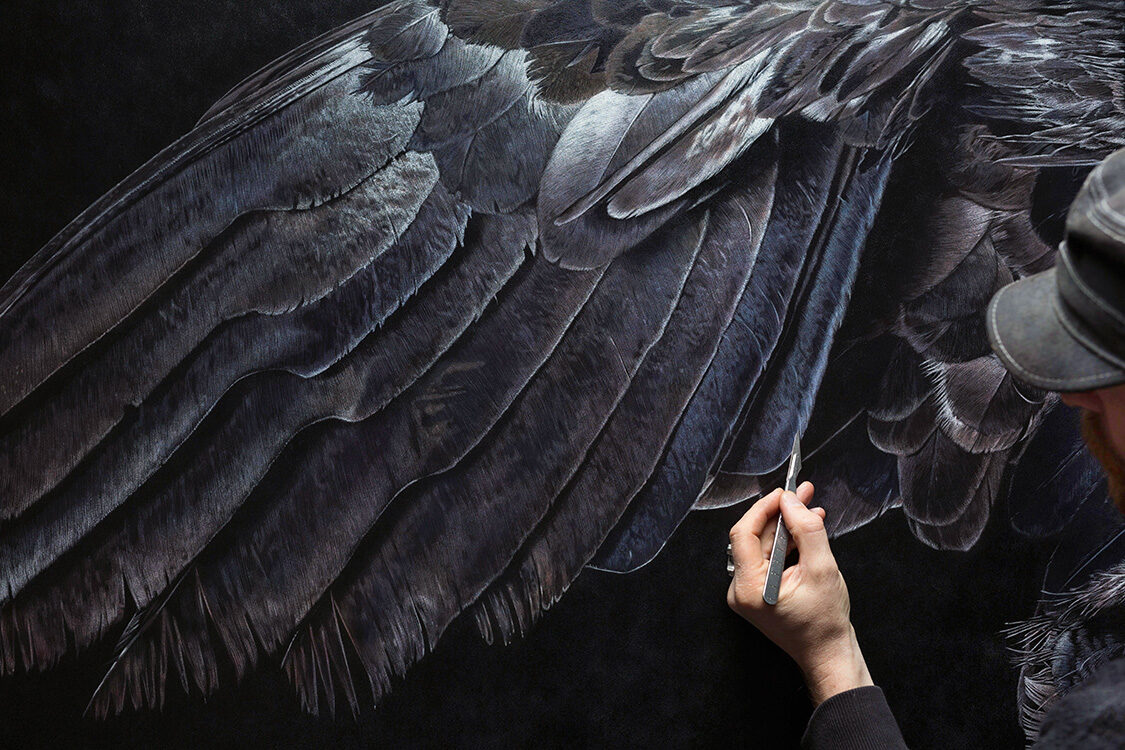 Of course, artisans have been decorating leather for centuries. Tanned leather was highly prized and crafted into books, boots, and saddles, which only the wealthy could afford. And Evans clearly delights in this legacy of historical craftsmanship, the precious nature of the material and the unforgiving nature of carving into it.

Honing his craft for over 20 years, he now works with hides sourced from all over the world and hand etches them with dozens of different knives and scalpels. He has also become an expert in leather tanning and dyes. Evans describes his work as “micro-sculpture”, he makes tiny precise grooves, methodically and with an almost zen-like patience. He works in the minutiae, in staggering detail building up small areas of the image, whilst referring to a digital photograph, mentally scaling up. A remarkable feat and an impressive display of technical virtuosity.

“I’m making slow art, it’s against the spirit of the age, [of this] microwave culture where everything has to be now. I’m slowing down, taking months on each piece,” Evans says. “A sculptor has a mallet and chisels, I have my tools, knives, and scalpels. The detail is paramount, the pressure of the blade is paramount. It’s about making every single mark count.” 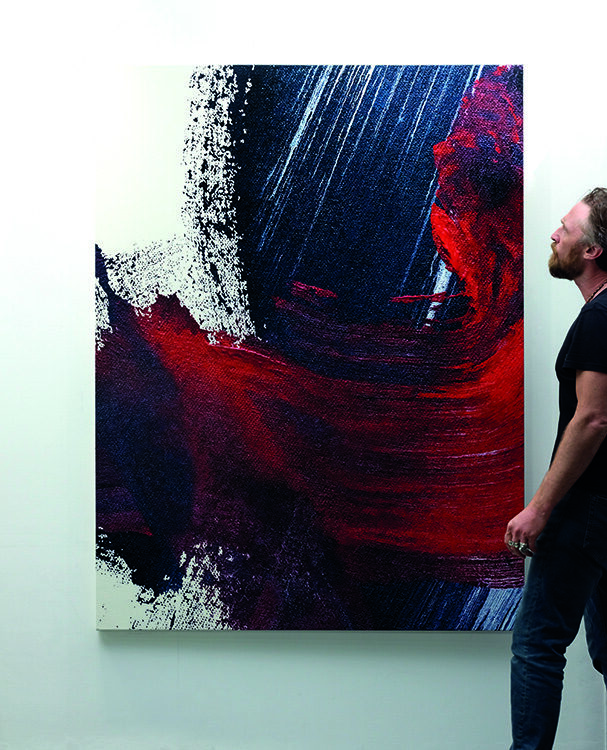 When one looks at the work and in particular his animal series, we are left dumbstruck at the sheer magnitude of the undertaking, the painstaking hours of etching away at the surface to produce mesmerising images of eagles, tigers, lions, and elephants. Each piece capturing not only the exact likeness but the actual essence of the animal. Everything is carefully considered, from the type of leather to the composition with the source image being a vital part of the process.

For his majestic Bald Eagle piece, Mark Evans worked with a specialist photographer using a Phase One camera, which can capture detail beyond the human eye. “You have to approach a bald eagle with a degree of reverence. It’s the iconic bird of North America,” he explains. “Once I have a rough sketch in my mind, the next stage is to decide which leather to use, what colour, what quality, how it marks and how soft it is. I have developed a style of photography, which is as close to my etching as possible. The aim is to capture motion and the spirit of the idea. With the bald eagle, it’s the nuances, the gestures and the unpredictability that catches you off guard.” The resulting artwork is truly breath-taking — the eagle, with its’ powerful wings outstretched, primed and ever watchful, ready for flight.

A similar innate power can be found in Evans’ Tiger picture. A sleek tiger on the prowl, licking his nose, his senses alive to possible prey. Here we see the artist’s skill in perfectly capturing the tonal colourations of the animal’s coat and markings. It is a masterclass in subtle shading through the delicate application of earthy hues. 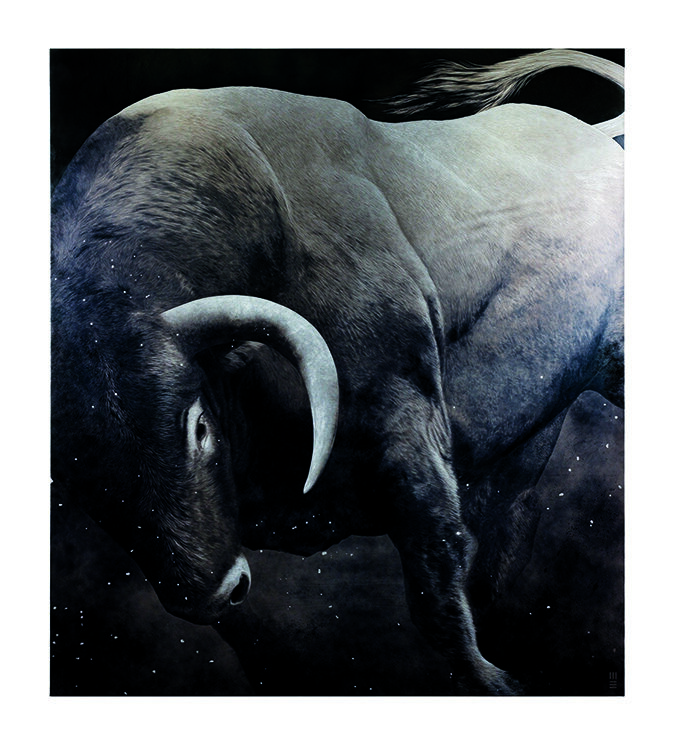 In July, Arcatto gallery will feature some abstract pieces by Mark Evans at the Conrad Algarve hotel. They are fascinating examples of trompe-l’oeil, with visual trickery at work.

Evans has created the illusion of large gestural brushstrokes, with swaths of red and black simulating a painting. In reality, they are constructed using his signature style of etching into and dyeing leather. His technique is clearly not bound to representation or figuration (Evans has over the years produced striking portraits of the good and great), but in the hands of a master, the possibilities are seemingly endless. He has created series of banknotes, which are intricate in design and often with a nod to Urban Art and Pop iconography. He also has a series devoted to guns, where he reproduces the patterns on classic revolvers and an equestrian series including an incredible diptych of a Polo player.

It should come as no surprise that Mark Evans’ work is in high demand and is seriously collected, most notably by royalty and Hollywood stars. Everyone who sees his work is left speechless and amazed. “In all my 40 years in the art business, I have never been quite so blown away by an artist’s work. The use of leather, the carving and colouring makes them remarkable works of art,” states Gillian Catto of Artcatto. “I have never seen anything quite so beautiful. Mark is the only artist in the world who can successfully create these statement leather artworks.”