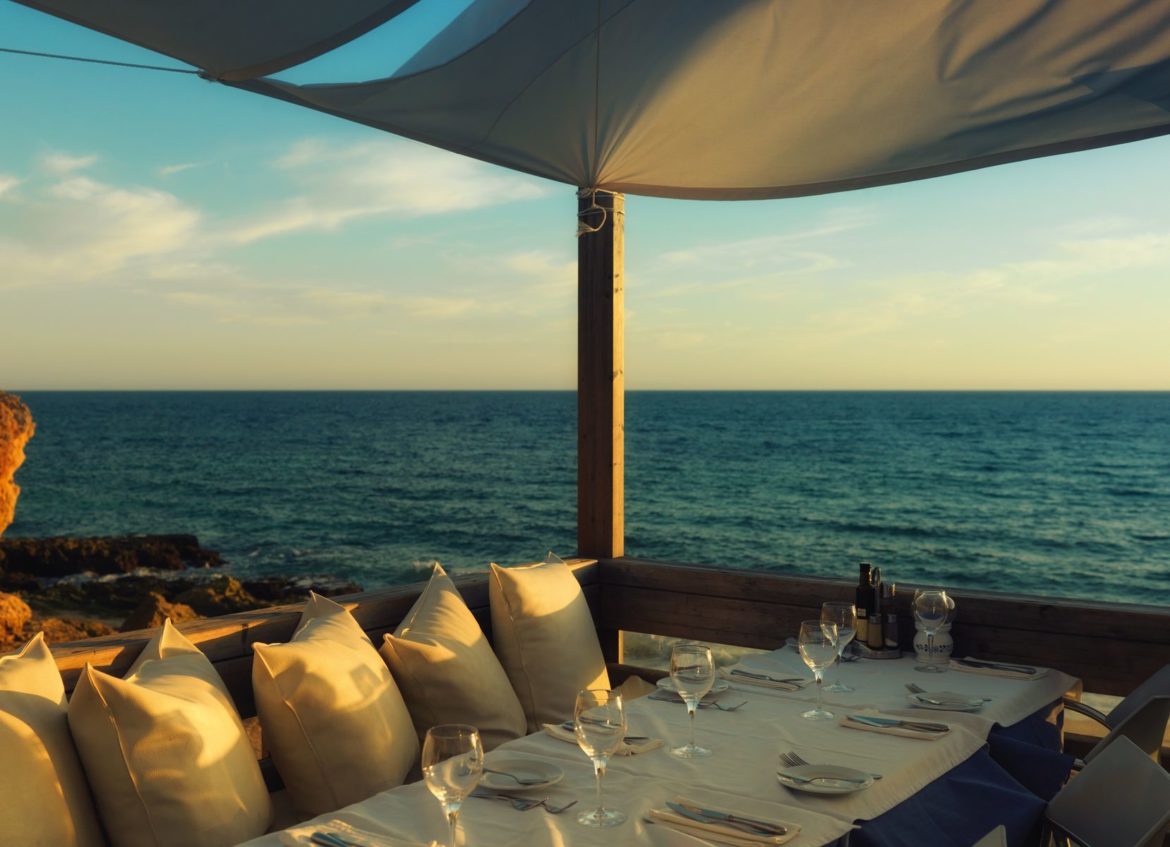 The Essential choice of the Algarve’s most chic beach restaurants

With summer in full swing, there’s no better time to enjoy a delicious meal overlooking the ocean. There are many excellent beach restaurants along the coast but here we have rounded those that we consider the best for great food down by the ocean.

Part of the exclusive Vila Joya resort, Vila Joya Sea is helmed by one of the best restaurants in Portugal, with two Michelin stars, at Galé, near Albufeira. For the 2019 season they have focused on Japanese flavours. Sushi master Amrit Lama, alongside renowned chef Dieter Koschina, have developed a menu with options of sushi, nigiri, sashimi, poke bowls and tiger prawn, as well as meat dishes such as pork ribs, Japanese beef and Japanese curry. The indoor area has a new décor inspired by traditional Portuguese fado houses but tailored to the beach concept, with chefs’ jackets and trousers along with kitchen towels hanging on ropes adorning the ceiling. Visitors also have the chance to try one of five new signature cocktails at the outside seating area.

Reservations are mandatory and space is limited to just 30 people. If the weather allows for it, Vila Joya Sea will be open until November. Closed on Monday.

This is the only restaurant on our list with an infinity pool and a Spanish view. Opened in July 2018, during its first year, it established itself in the western area and built a loyal client base. The Grand Beach Club belongs to the only five-star hotel in Vila Real de Santo António, Grand House Algarve, and is located on the old city walls at Ponta da Areia, on the Guadiana River estuary. Right next door, an extensive 16km stretch of sand begins, extending as far as Monte Gordo. The club has an esplanade, indoor and outdoor bar, and an area with thatched beach umbrellas and loungers. It stands out for the quiet atmosphere, far away from mass tourism, even in the summer months, and the attention to detail, along with the staff ’s easy smiles. The beach club has an open kitchen managed by German chef Jan Stechemesser, who has created a diverse menu with fish of the day, grilled treats, meat dishes, pizza, salads and massive burgers. The décor in shades of white and blue and the countless wicker lamps hanging from the oval ceiling give the space a fresh and exotic look. During summer there is live music, DJs and sunset parties.

The Grand Beach Club is open from 10am to 10.30pm and reservations are a must.

Located at Praia do Ancão, between Quinta do Lago and Vale do Lobo, right where the Ria Formosa protected area begins, the view here is stunning. The modern and impressive ‘floating’ wooden structure shaped like a boat can been easily spotted among the dunes covered in the yellow shades of hundreds of Italian strawflowers. Restaurant 2 Passos has been serving meals since 1982, but has kept up with modern times. Inside, the white and grey décor features countless marine motifs and the menu at this family restaurant focuses heavily on fish and seafood as well as a Mediterranean diet. Oftentimes the menu options vary depending on the catch of the day. The most popular order is definitely the tiger prawn Passos-style, and new this summer is the braised Fuseta tuna. The upper level also has a rooftop bar with panoramic view over the sea and the Ria Formosa, where clients can enjoy a cocktail before their meal. Across the restaurant there is a beach concession, a nautical centre and the 3 Moço beach bar.

The restaurant is open every day for lunch, and from Tuesday to Saturday for dinner in August. Reserve ahead.

Near Vilamoura Marina, Purobeach belongs to the Tivoli Hotel and consists of two areas: Poolside, by the hotel gardens, and Beach- front, on the beach. The latter stands out for the building’s avant-garde aesthetics and its immaculate white. The minimal white décor gives a clean look to the space, which becoming increasingly popular, particularly thanks to the Sunday brunch. The Purobeach menu was influenced by international cuisine, namely Asian and Mediterranean, with dishes created by the executive chef of the Tivoli group, André Basto. There are also local dishes, with a good selection of fish and seafood. On the beach concession, right in front of the restaurant, clients can soak up the rays on the Bali sun loungers or relax under the thatched beach umbrellas. When the sun sets at Purobeach Vilamoura Beachfront, the beach turns into a dance floor with DJs and a vast menu with signature cocktails.

Maré beach bar and restaurant, at Pine Cliffs Resort, was recently refurbished and has a new look, new menus and a new service: a Beach Butler, available on the restaurant’s sundeck. The big news for the summer was the addition of an upper level, just a few metres away from the beach but with plenty of privacy. The restaurant serves light meals and several cocktails and the top floor has Bali sun loungers and sunbeds. Clients are also offered a beach towel, water, fresh fruit, chef ’s delights and a bottle of wine, all courtesy of the Beach Butler, who leads the service on the sundeck of Maré. On the lower floor, chef João Alves has developed a new menu highlighting fish and seafood. Octopus or crab salads, Algarve gazpacho with crab, fresh spinach salad with berries and ceviche burgers are just some of the options available. Maré also lets guests enjoy every flavour on the menu in the comfort of their beach sunbed.

Maré at Pine Cliffs is open every day for lunch and dinner until October.

Praia Dourada belongs to Vila Vita Parc and stands out for a light, balanced and healthy menu, with options such as fish tacos, whitefish ceviche, vegetarian burgers, watermelon gazpacho and poke bowls. For clients who wish to enjoy a meal on the beach, the restaurant also serves snack and drinks directly on the thatched umbrellas area. Throughout the summer, the restaurant hosts several sunset parties and has a resident DJ to entertain guests. Every Sunday there is also a lunchtime Caribbean-inspired BBQ with live music. Praia Dourada is one of three restaurants that make up the Armação Beach Club, which the resort launched this summer. The new club stretches along 300m of sand, where a wooden walkway links Praia Dourada to SóVerão restaurant, which has a selection of snacks, grilled dishes and lots of local produce, and to Arte Náutica, whose elegant menu specialises in fresh fish and seafood dishes.

Praia Dourada is open every day between 10am and 10pm.

Located between Carvoeiro and Ferragudo, this wooden restaurant belongs to Caneiros Luxury House & Suites and seems to be hovering over the sand. The view from the dining room or the esplanade, on the upper level, is spectacular. The restaurant faces a giant, lone rock in the middle of the water, which is called Leixão das Gaivotas (a leixão is an insulated rock on the seacoast) since many seagulls chose this place to nest. The restaurant has received numerous awards and, in March, Condé Nast Traveller named it one of the best in the Algarve with an ocean view. Rei das Praias is famous for its fresh grilled fish, but one of the most popular dishes is the lobster rice. Their grilling skills are such that this is one of the few restaurants that can grill large fish whole rather than butterflied, which makes the meat incredibly flavourful. The sea bass, sole, sea bream and red mullet are highly recommended. They also have a great selection of wines and champagnes. The restaurant has a beach concession with Bali sun loungers and sunbeds with bar service.

Open every day for lunch and dinner.