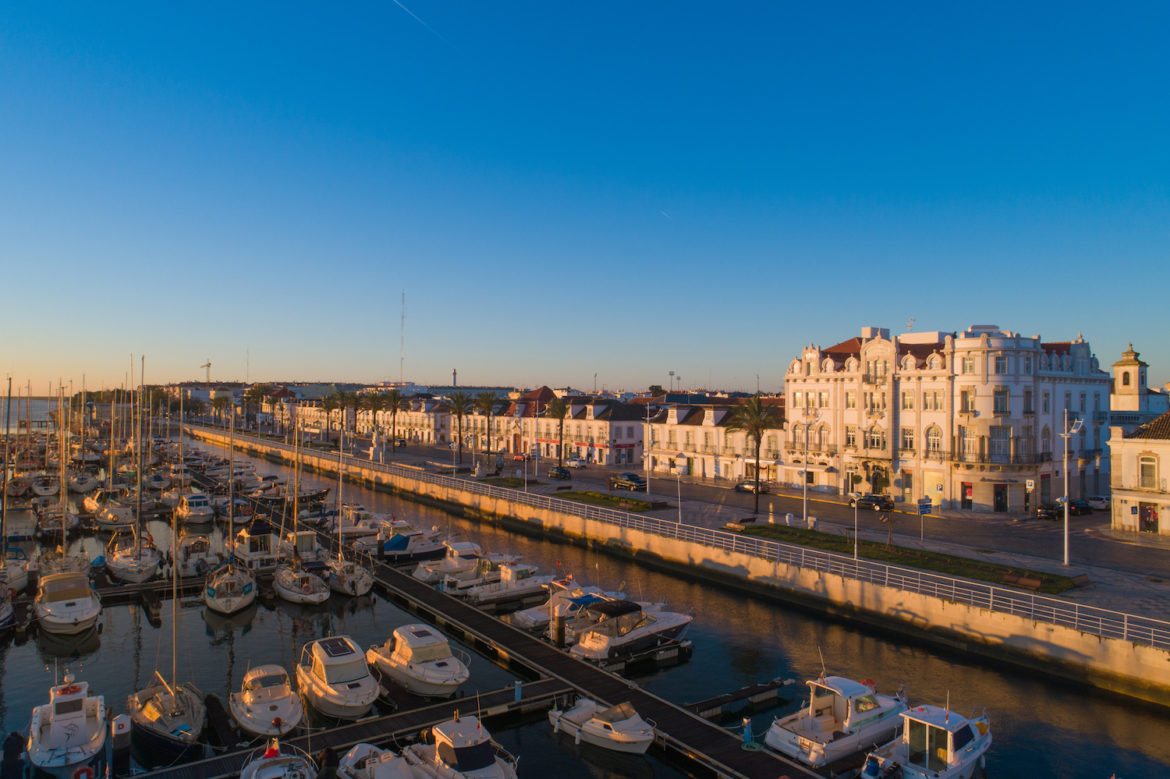 Last weekend, Grand House Algarve commemorated its first birthday in style with a culinary celebration. In honour of the Grand House’s inauguration on February 7, 2019, the boutique hotel (located in Vila Real de Santo António along the Guadiana River), hosted two “Grand Dinners” at its restaurant, the Grand Salon. The dinners were held on Friday (February 7) and Saturday (February 8), with the experience combining the culinary skills of two renowned chefs (Jan Stechemesser and Tiago Bonito) to make for two magical evenings. These Grand Dinners featured meals made up of six “moments” matched with wine pairings and aimed to take guests on a “sensorial trip through the north and south of Portugal”. 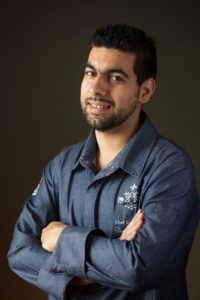 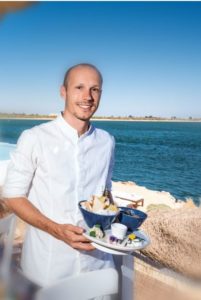 The evening began at the Grand Salon Bar, where guests were invited to mingle while enjoying a light-yet-fruity welcome cocktail (made with wine of Colinas do Douro Branco, 2016) before invited into the sophisticated setting of the Grand Salon. With the restaurant’s soft candlelit glow, tables warmly decorated and each seat adorned by personalised, hand-written menus, it certainly set the scene for the elegant evening that had only just begun.

The first moment of the Grand Dinner consisted of four melt-in-your-mouth tuna cubes with orange and algae garnishes and paired with a crisp white wine (Colinas do Douro Branco, 2016). Second came a succulent morsel of lobster, surrounded by caviar and citrus fruits — all swimming in a champagne sauce and complimented by a glass of white with fruity notes and a smooth finish (Quinta da Extrema Reserva Branco, 2017). 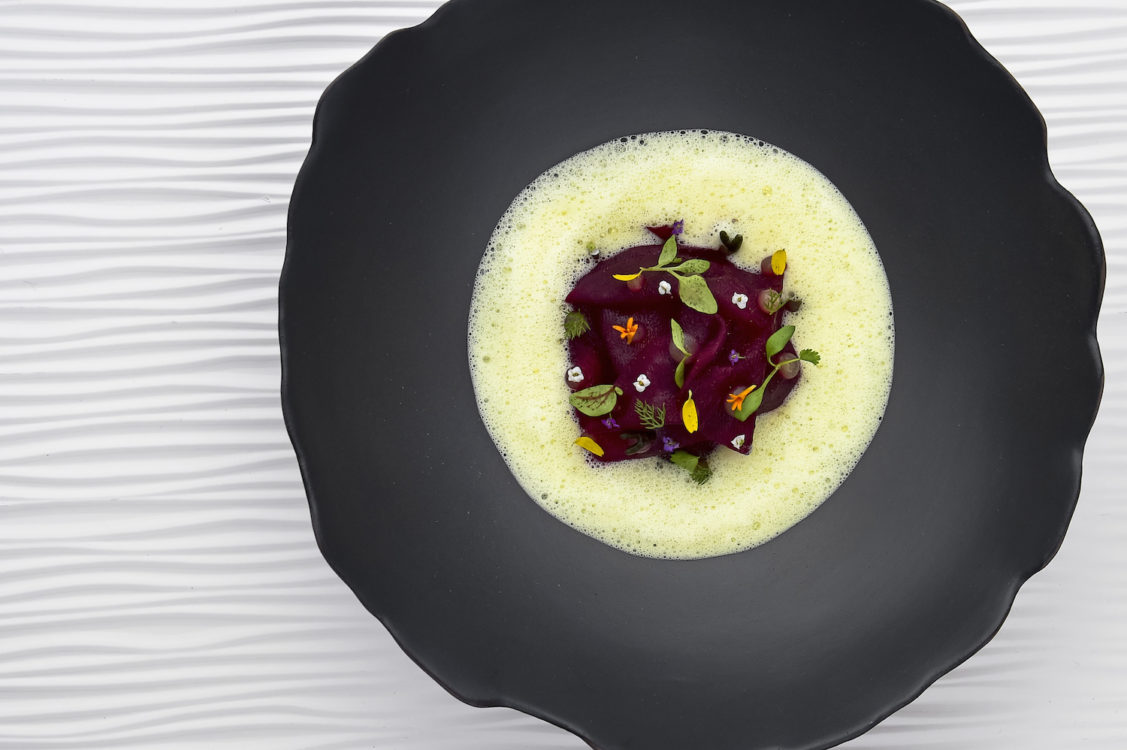 The middle moment featured red mullet with savoury scarlet prawns and ‘açorda’, joined by an oaky, aged white (Quinta da Extrema Branco Edition I, 2016). The fourth moment welcomed slices of Arouquesa beef — cooked to absolute perfection — flanked by artichokes, wild mushrooms and dots of decadent truffle, served with a full-bodied red (Quinta da Extrema Reserva Tinto, 2017). The fifth moment’s Amêndoa liqueur acted as a palate cleanser, offering the refreshing tastes of lavender, almonds and honey paired with a floral, velvety red (Quinta da Extrema Edition II, 2017). The last but certainly not least moment presented the dessert, with a “from the childhood” theme. This blast-from-the-past treat spotlighted a translucent egg-shaped sugar “shell” (which created a fizzling sensation on the tongue — like a classic pack of Pop Rocks!) that was filled with a creamy popcorn-flavoured mousse, nested on a bed of pink cotton candy with a dollop of caramel and finished off with a late-harvest white made from sweet Muscat grapes (Colinas do Douro Colheita Tardia, 2015). 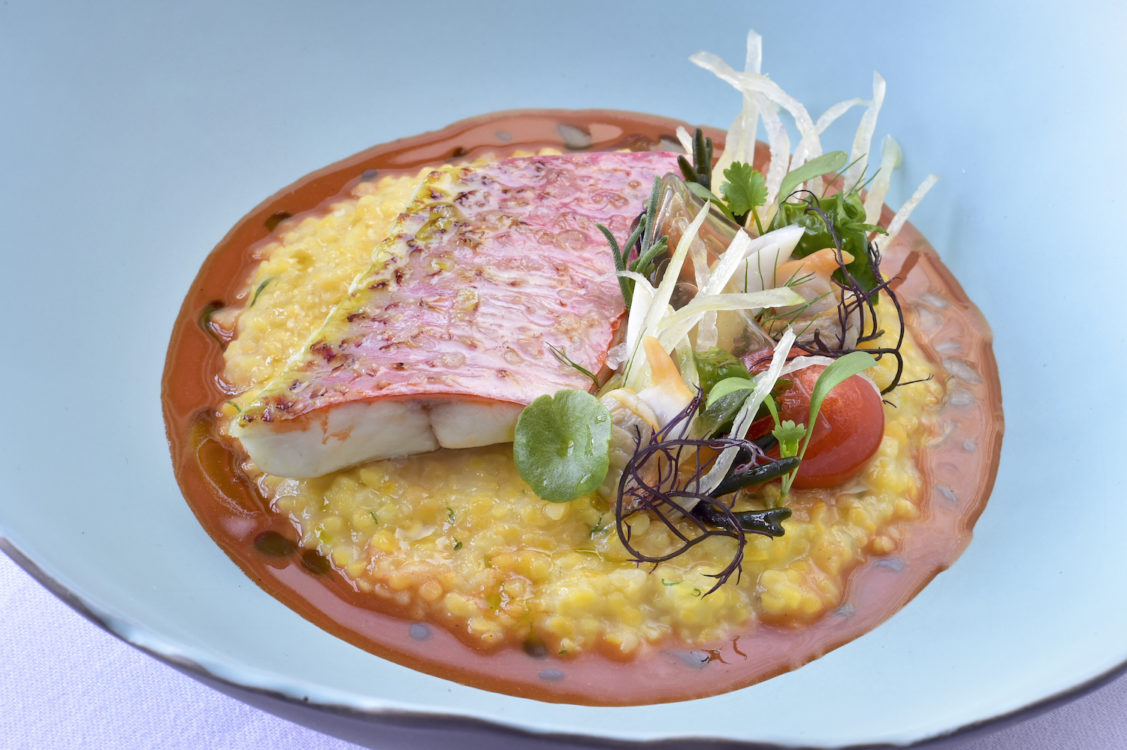 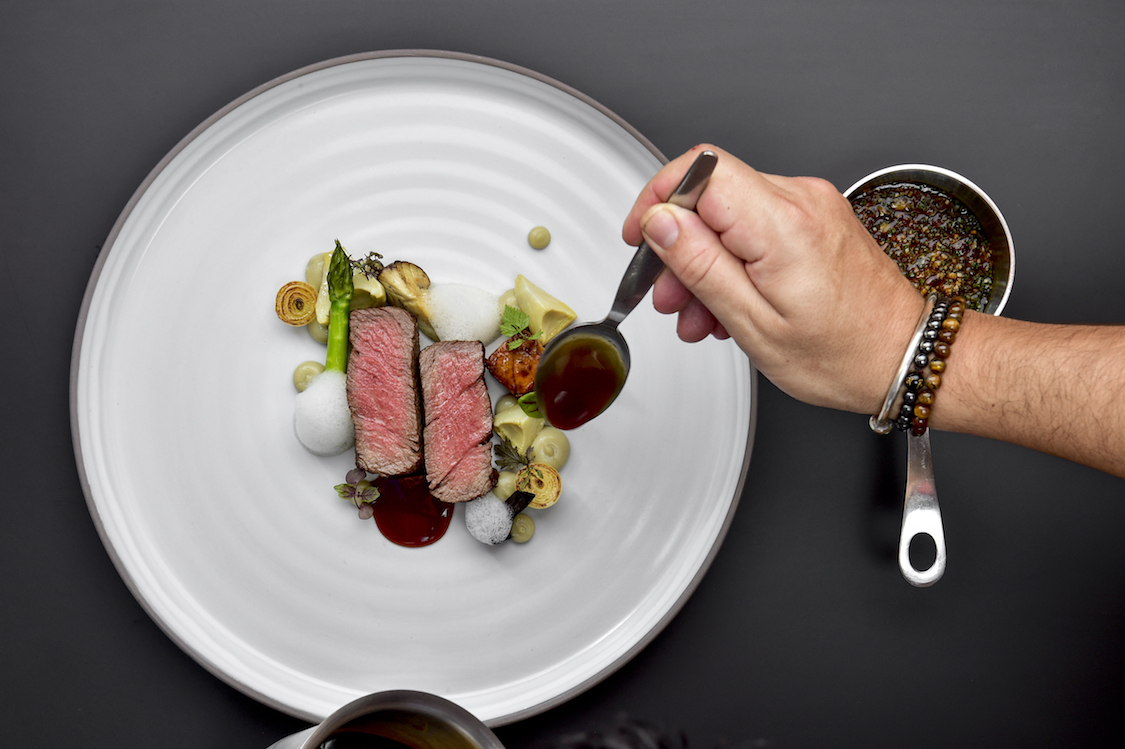 Every moment was immaculately executed, with just enough time between each serving to excitedly anticipate the next without waiting or feeling rushed. The products and ingredients clearly focused on “seasonal products and sustainability” while paying true homage to traditional Algarvean cuisine, with the fresh-from-the-Algarve tuna and red mullet and wines from the Douro region acting as prime examples. Reflecting on the hospitality, cuisine, wines and overall atmosphere of the Grand Salon, the only word to truly sum up the evening would have to be “grand”. 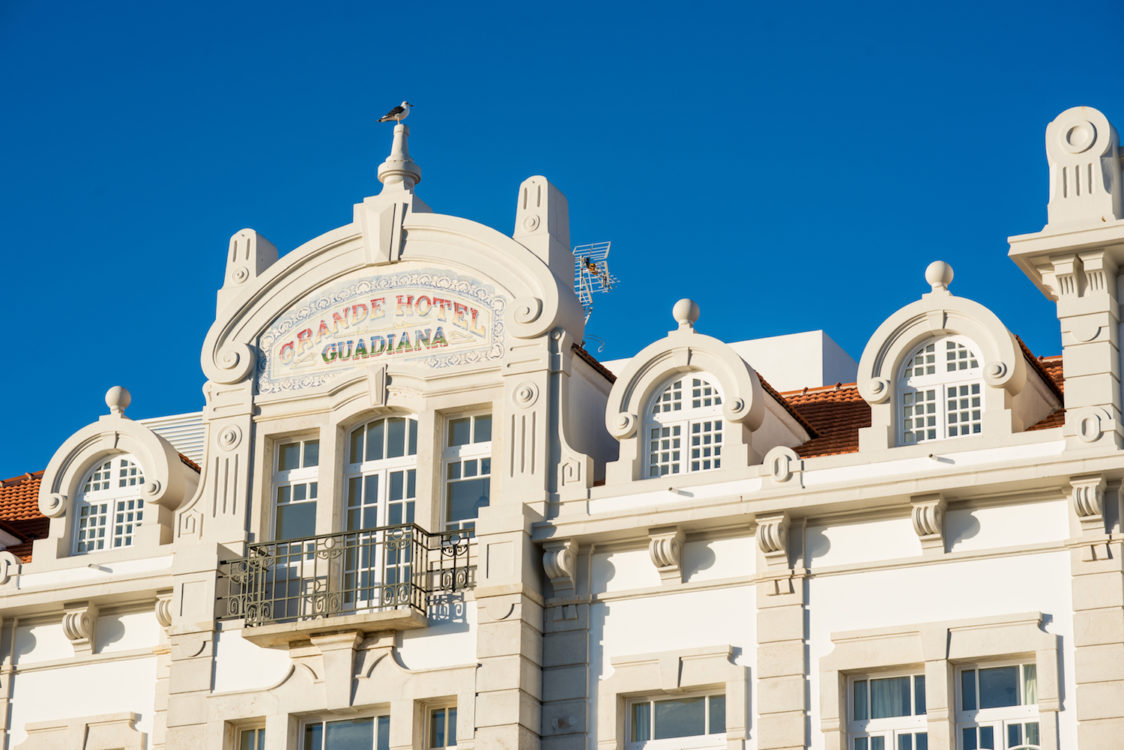 Nestled in the Algarve’s most eastern corner, Grand House Algarve became the first five-star hotel in Vila Real de Santo António. The Grand House was totally transformed from the once-thriving Hotel Guadiana, which was inaugurated in 1926 and is credited as being “the oldest hotel south of the Tagus River” (according to Grand House’s website regarding its history). As the first luxury hotel in the Algarve, the Hotel Guadiana is said to have marked the start of tourism for the country’s most southern region.

Now, thanks to the establishment of Grand House, the revived ‘Grande Dame’ received a much-welcomed “new lease of life”. The 1920s-inspired Grand House aims to maintain the traditional, timeless charm while embodying the eclectic presence of the ‘Roaring Twenties’ era by “combining a diverse mix of decorative influences, from Art Nouveau details to elegant touches of Baroque style, all complemented by contemporary furnishings”.

The Grand House features 30 rooms and suites elegantly ornamented with antique pieces, intricate moulding, glamorous crystal-festooned chandeliers and other delicate features that add to its classically established allure. The entire experience is meant to take guests on “a journey back in time” (as if you were living inside “The Great Gatsby” novel).

The Grand House’s charming rooms range in three different sizes, to include 12 small, 12 medium and six large suites (appropriately dubbed “Grand Rooms”). Additionally, the hotel features additions including a wellness suite, fully stocked library, cosy lounging areas, a bar, two restaurants (with one located a short distance from the resort), and more. And as a pet-friendly hotel, Grand House invites guests to bring along their four-legged furry companions to indulge in the experience as well (with €10 of the €25 daily cleaning fee donated to a local animal support association). 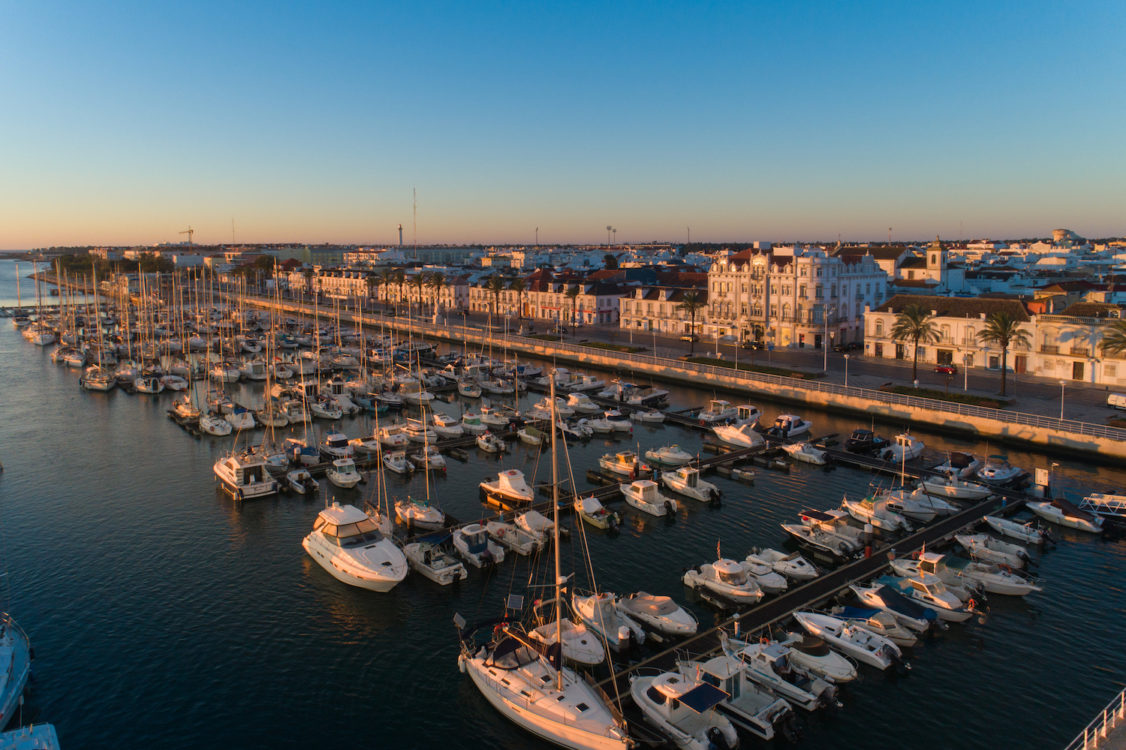 From the elegant touches of the decor to the top-quality service consistently offered to the unparalleled waterfront view and everything in between, it is easy to see how every inch of Grand House Algarve aspires to embody their overall motto: “Ain’t life Grand?” 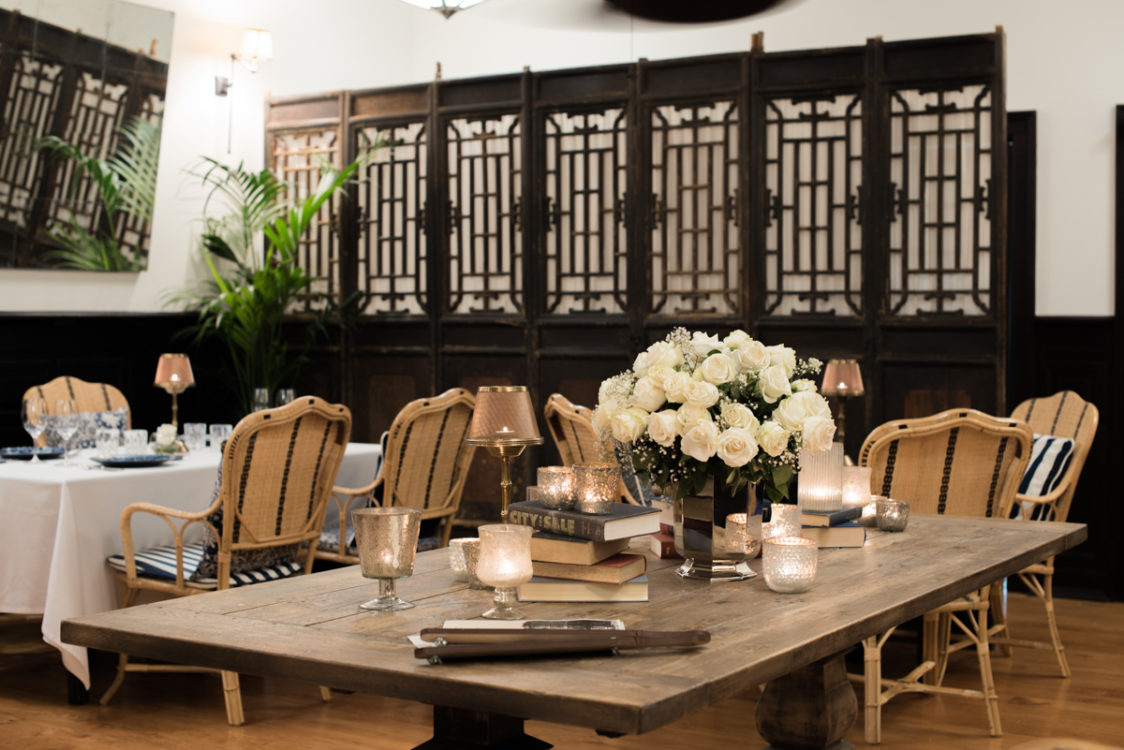 The Grand Salon invites guests to “embark on a culinary journey through Portuguese culture”, focused on providing genuine service of superb, locally sourced cuisines and an abundant selection of wines. The kitchen is led by seasoned chef Jan Stechemesser, and the restaurant focuses on presenting tradition with a modern twist as well as offering “a delicious ode to local cuisine”.

The Grand Salon is open daily from 7pm to 10:30pm, with reservations strongly recommended.

The Grand Salon Bar features a quaint bar that mirrors the hotel’s colonial atmosphere and acts as a “tribute to the opulent chicness of former gentleman clubs”. Enjoy the sounds of smooth, soft jazz alongside an array of old-fashioned cocktail choices, served by none other than the “Grand Alchemist” from behind a magnificent 100-year-old mahogany counter.

The Grand Salon Bar is open daily from 3pm until late.

The Grand Beach Club sits just 2km away from the resort (with Grand House offering a shuttle service for guests) and features plenty of refreshing cocktails, delectable land-and-sea dishes, and an infinity pool overlooking where the Guadiana River meets the ocean. Just around the corner from the Grand Beach Club spans the 12km-long serene, sandy shore of Praia de Santo António, offering a pleasantly secluded trip to the beach.

The Grand Beach Club is open daily from 10am to 7pm.

Whether it be horseback riding along the beach, swimming alongside schools of tuna, voyaging through the sky via a gyrocopter, spending an evening gazing at the stars, and so much more, Grand Moments presents an array of opportunities to offer something for everyone to enjoy.

Outside of this initial “Grand Dinners” opportunity, Grand House plans to host more dinners with visits from other distinguished chefs throughout the first quarter of the year. Additionally, Grand House offers special packages in celebration of Valentine’s Day, Carnival, and more.

For two-night stays booked between February 13 — 16, Grand House’s Valentine’s Day special presents the perfect way to celebrate love in total luxury. Starting at €869.20 for two adults, this romantic package includes fresh fruit and macarons in the room upon arrival; room-delivered breakfast; a bottle of sparkling wine; one candlelit, five-course dinner at the Grand Salon; one romantic lunch at the Grand Beach Club (including one sangria); one horse-riding experience at the beach; and one couple’s massage.

For check-in dates from February 20 until the 26, Grand Carnival offers a “stay-3-nights-pay-for-2”, multi- inclusive package for two adults (starting at €852). This reservation comes with one three-course lunch at the Grand Beach Salon; one Carnival “masterclass”; one guided tour through Vila Real de St. António; one couple’s massage; and those staying on Saturday, February 22 will also enjoy a five-course thematic menu for two at the Grand Salon.

Images for this article provided by: Chefs Agency 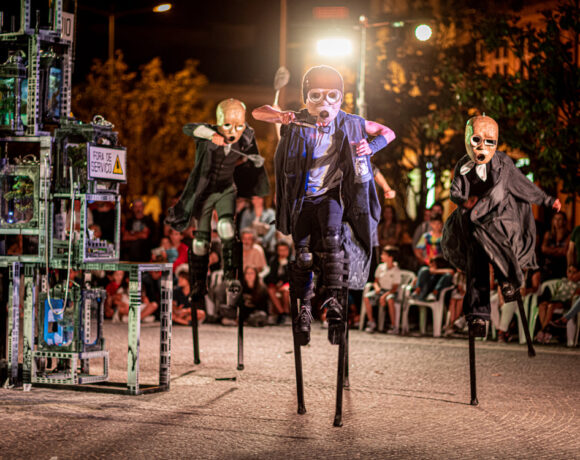