Good as New: A look inside the revamped São Louren...

One of a Kind: An experience a..

Good as New: A look inside the revamped São Lourenço Cultural Centre 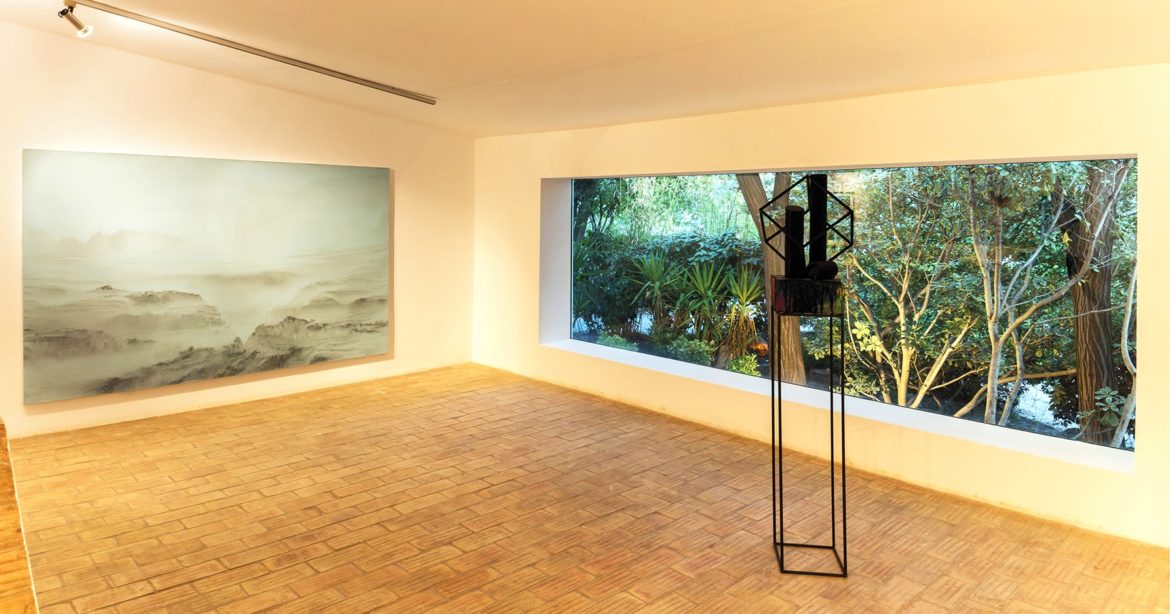 After celebrating its reopening this summer, the São Lourenço Cultural Centre already has so much in store

On July 29, the São Lourenço Cultural Centre, in Almancil, reopened with an exhibition by British artist Jason Martin — the first of many more events to come. The centre first opened in 1981 under German couple Volker and Marie Huber and was a cultural reference in the Algarve, but it closed in 2013. “If it wasn’t for [the new owners], this would be closed,” says Cristina Palma. “It’s wonderful to have these people.”

Cristina is the designer for the new São Lourenço Cultural Centre, after working for the old cultural centre for 12 years prior to its closing. Now with new owners, Cristina is ecstatic to see the centre revived and ready to thrive. She works particularly close with the centre’s director, Tessa Schack, who she describes as having “a fantastic energy” and says the two work well together in making ideas come to life.

Alongside Tessa, the other four owners are Bernard (Tessa’s husband), Gilles Weil, and Paula and Mário Sequeira, who were the original pair to purchase the centre in 2017. The collaboration is a perfect balance, Tessa says, with everyone bringing something different to the table while bonding over their mutual interest: “A passion for contemporary art, culture, and the Algarve.”

Aside from art, Tessa says the centre will host conferences, concerts, and other cultural events. With happenings like afternoon teas and cocktail parties in talks as well, the São Lourenço Cultural Centre is truly a treat for all five senses. “It’s not just an art gallery,” she says. “It’s a cultural centre.”

The centre’s renovations took roughly eight months to complete, and the final result was well worth the wait. Inside, there are six exhibition rooms open to the public, with each having their own unique traits. The centre also has a fully stocked private kitchen, which Cristina and Tessa hope to get more use from in the spring when warmer weather allows for such creative culinary experiences.

One of both Cristina’s and Tessa’s fav­ourite additions in the gallery’s front room is an enormous window splitting the wall and overlooking the backyard. The view alone is an immersion into nature without ever needing to step foot outside — though one should not miss out on such sights.

Three doors lead to the backyard area, immediately greeting guests with a kaleidoscope of colours from the bright blooms of freshly planted flowers. The first outdoor section centres around a raised platform, where Fado singer Sara Gonçalves performed in autumn and set the stage for many more musical events to come: “from jazz to country to Portuguese to anything”, Tessa says.

Stepping out from the kitchen (to the side of the stage area), a table and chairs sit under a canopy of ivy. Looking out from here is another spacious setting, which Tessa says they plan on keeping stocked with more sculptures, statues, and other outdoor works of art. Around the corner spotlights a totally restored turquoise pool and a section with three bedrooms, which will be refurbished in the future to house visiting artists. The continuing sidewalk winds through a separate garden, where lush greenery lines the path and creates an exhibit of its own. “It’s a magical place,” Tessa says. When it comes to the old cultural centre, she says things will be different, though she prefers not to make comparisons because “that book is closed”.

“[The previous centre] did a lot for culture here, and what they did, they did very well. It’s up to us to bring in something interesting that will serve the community as a cultural centre and make it different from what it used to be,” Tessa explains. “Life is an evolution.”

On top of the centre itself changing, so has its audience. Tessa and Cristina both say that the centre is focused on adapting to these new needs of visitors and hopes to provide a more in-depth experience. “People are more interested in art, and they ask a lot of interesting questions,” Cristina says. “So we have a big challenge ahead.”

Over the summer, following the Jason Martin exhibition, the centre transitioned to a collective showcase of multiple artists from all over the world, such as Álvaro Negro (Spain), Erik A. Frandsen (Denmark), Gary Webb (UK), Rui Algarvio (Portugal), and more. The current exhibition is of contemporary artist Luís Coquenão, and it runs until December 20.

Luís is a Portuguese artist with a rather imaginative style, especially when it involves nature. His paintings of various sizes decorate the inside of the centre with vivid flashes of colour a stark contrast against matte-white walls. Cristina mentions that the painter skilfully combines the fluidity of water with some of his work. When he visited the centre, he explained how for one of the pieces he poured water onto an acrylic-covered canvas and let the water “flow” through his painting. While some artists can be hesitant to discuss their process, both Tessa and Cristina agree that Luís is more than happy to share. “He was really incredible to hear,” Cristina says. “Artists don’t always have this ability, but he was very open.”

This was particularly charming to see when 30 children from neighbouring Escola EB de São Lourenço came to visit the centre. Gifted with packets of crayons and their own imaginations, the educational experience gave the children a chance to talk with Luís, create their own masterpieces, and dive into the colourful world of contemporary art.

The centre welcomed a second group of children in November and plans to host another in December. With a heavy focus on educating today’s youth, Tessa says they also hope to collaborate with local universities in the future. “We find it’s important that children should know more about art, especially with how present technology is in their lives,” she says. “There’s nothing better than seeing something outside of a computer screen.”

From January to March, the São Lourenço Cultural Centre plans to feature a collective exhibition of artists Daniel Mendel-Black (USA), Muntean/Rosenblum (Austria and Israel, respectively), Aimée Garcia (Cuba), Ruben Ramos Balsa (Spain), Ruth Gómez (Spain), Toby Paterson (Scotland), and Paulo Climachauska (Brazil). In conjunction with group exhibitions, the centre will also aim to have a few solo showcases over the year, according to Tessa. And, of course, there will be so much more than just art.